Donald Trump has enthusiastically promised that when he is president, the use of torture will have no restraint. Don't kid yourself: Congress will not be able to stop him.

Despite this promise of all torture all the time -- or perhaps because of it -- Rasmussen now has Hillary behind Trump in a head-to-head poll. Granted, Rasmussen skews conservative and the poll is something of an outlier: I still think that there is truth here.

Trump has been hobnobbing with the execrable liar Ed Klein, a fact which gives us some indication of the nature of the upcoming general election. In fact, it isn't really "upcoming," is it? It's on.

A reader directed my attention to this excellent piece (cool illo, by the way) which forecasts how a populist movement can turn democracy into disaster. I don't agree with all of the author's points. For example...


And what mainly fuels this is precisely what the Founders feared about democratic culture: feeling, emotion, and narcissism, rather than reason, empiricism, and public-spiritedness. Online debates become personal, emotional, and irresolvable almost as soon as they begin. Godwin’s Law — it’s only a matter of time before a comments section brings up Hitler — is a reflection of the collapse of the reasoned deliberation the Founders saw as indispensable to a functioning republic.

The problem: This very article can be construed as an examplar of Godwin's law. Our fear of offending Godwin can constrain us from making a valid historical analogy.


Obama would never have been nominated for the presidency, let alone elected, if he hadn’t harnessed the power of the web and the charisma of his media celebrity. But he was also, paradoxically, a very elite figure, a former state and U.S. senator, a product of Harvard Law School, and, as it turned out, blessed with a preternaturally rational and calm disposition. So he has masked, temporarily, the real risks in the system that his pioneering campaign revealed. Hence many Democrats’ frustration with him. Those who saw in his campaign the seeds of revolutionary change, who were drawn to him by their own messianic delusions, came to be bitterly disappointed by his governing moderation and pragmatism.

And the problem here is that this analysis depends on the presupposition that Obama had the power to control the media in 2008. Au contraire, say I. Some media power greater than Obama made that decision. A deep voice from the shadows commanded: "Him. Not her."

No. That's wrong. The Deep Voice said something more specific: "Anyone but her." 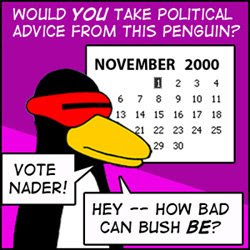 To prove the point, take a look at this list of Hillary's accomplishments offered on the left-wing site Addicting Info. The compiler is downright apologetic about having to say something nice about one of those eeeeeee-vil Clinton. Now look at the comments:


the dumocrat party surely has a stronger candidate to offer than the butcher of benghazi.......

This, on a left-wing site.

It doesn't matter whether such words are offered by a robo-troll or whether they are genuinely felt: Clinton-Hate shall carry the day, because the Establishment has done everything it can to foster Clinton Derangement Syndrome.

The fanatical smearing of the the Clintons is unparalleled. The rewriting of the history of 1990s -- the best years of our lives -- is unique. No other phenomenon in American history can match it.

I can prove the point by citing many examples. The most obvious one: For years -- years -- the mainstream media empowered Ken Starr and pretended that Whitewater was something real.

You can learn a lot about Clinton Derangement Syndrome if you watch the video embedded below. At first, this clip from a 1991 20-20 show will probably strike most of you as completely unlinked to the present discussion. If watch it, your first question will be: "What does this tale of corruption in Mariposa County, CA, have to do with Bill Clinton? Most of this report is about things that happened during the 1980s. How is that relevant?"

(Your second question will be: "Did Barbara Walters really do her hair like that?" Yes, she did -- and so did a lot of other women. It was 1991.)

I'll tell you why this video is relevant: It documents that there was an airstrip in California where drug pilots routinely landed, with the full knowledge of the authorities -- who obviously got their cut. Yet nobody blamed George Deukmejian, the Republican governor of California who did absolutely nothing to impede the drug flights.

I knew about the Mariposa County drug operation back in the 1980s. (At least, I had heard the many rumors.) I also heard about similar operations in Texas and Arizona.

And let's not even talk about Florida. We all know about the drugs that have flowed in to Florida by air and sea. Nobody ever blamed Bob Martinez or the other governors for that massive traffic.

Yet if you were alive and of age in the 1990s, and if you followed "alternative" news sources, you surely read endless stories about Bill Clinton and that infamous airstrip in Mena, Arkansas, used by Barry Seal. These stories all implied that Clinton knew of the operation and got a cut. Some of those stories gave the impression that Bill Clinton was the King of Coke.

There was a very large book which made that argument. It was titled Compromised, and it was based entirely on the word of a spook named Terry Reed. I never considered Reed credible: He was spooked up, he had severe legal problems, and he told wildly different stories at different times. Nevertheless, back in the 1990s, both lefties and righties passed around copies of that book as though it were a bowl of Christmas candy.

It was all crap.

In 1992, I spoke with Arkansas State Prosecutor Charles Black, who did not verify any of the wild tales then being told about Bill Clinton's alleged knowledge of the operation. He was not angry at Clinton -- after all, the state government had funded Black's investigation. Black was angry at George H.W. Bush, whose administration controlled the federal prosecution of Seal. It was the Bush DOJ, not Clinton's administration, which refused to use important evidence that Black's team had collected.

Let that sink in. The Clinton administration had investigated Mena, and a Republican-run federal government refused to use the evidence. Yet progressives hated Clinton far more than they hated GHWB.

Throughout the 1990s, my know-it-all friends (who refused to talk to Black, even though I gave them his damned number) kept trying to take me to school on Mena. "Don't you know that Clinton made millions from the cocaine racket?"

No, I did not know that -- and neither did they.

I would then counter: "Why don't you blame Pete Wilson or George Deukmejian for that airstrip in Mariposaa county? That operation was protected from on high. Maybe higher than the local sheriff. Have you considered doing some original research?"

My know-it-all friends could only sputter: "But...but...CLINTON!"

"Where's the evidence against him?" I would ask.

Please understand: My friends, for the most part, were liberals, not Republicans. Nevertheless, they hated Clinton so much that they were willing to quote "facts" published by the notorious WSJ opinion section, which was a reactionary sewer.

The hard truth is that we think the way the media tells us to think. You may think that you cannot be brainwashed, but you're lying to yourself.

Don't flatter yourself with the delusion that you cannot be fooled because you are too ornery, too outside-the-box, too much the gadfly. You still mindlessly parrot the stories you read in those ornery, outside-the-box, gadfly websites you favor.

Those sites are open to manipulation, as are all other sectors of the media terrain.

That's why when I say "Bill Clinton" you (at least some of you) think Mena -- but when I say "Deukmejian," you (all of you) don't think Mariposa. This, despite the fact that Clinton's administration actually investigated the drug flights going into Arkansas, while California's Republican governor did absolutely nothing nothing nothing to stop what was going on in his state.

You're as susceptible to programming as anyone else.

And if you mindlessly repeat what I'm saying here, you're only proving the point!

What she said: I love this piece by Dakinkat. She articulates perfectly why I've turned against Bernie Sanders, a man I once admired -- why, in truth, I feel a bit of vomit burbling up in my throat every time his face shows up on screen:


I always ask Sanders supporters why they think that he is the voice of the powerless when the current voting records show exactly who votes for him and who votes for her.blog_1932_democratic_convention It’s obvious that the most disenfranchised in our country back Hillary Clinton. It’s not because we’re Southern or low information. If we’re women, it’s not because of our vaginas. It’s not because we’ve been misled because of our race or circumstances or because we’re some how confused. It’s because we look at the history of actions and try to match them to the words.

It’s extremely weird that we do know what Hillary Clinton was paid in speeches as well as every other detail of the Clinton’s personal finances and foundation’s finance. All of these things have been publicly reported. What we know about the Sanders family fortune–and he’s a millionaire so in my poor ol’ southern white woman ways that’s a damned fortune–is clouded behind failure to disclose. We’ve heard some really hinky stuff. Some of it has been dug up by right-leaning sources because no one else will do it openly. First, we know that the Sanders campaign does the old small town political grifting trick. He puts his family on his payroll.

I have to admit to finding the entire Sanders’ campaign and arguments vile and basically racist. We continue to see him mention his crowd of young white minions over the concerns of every one else. We continue to see his excuses for losing. What we don’t see are his taxes and press coverage of his many hypocritical actions.

Oh, it'll happen, Kat. Just as as soon as he gets the nomination. (It's still possible, if the mainstream media can find the Killer Smear to use against Hillary).