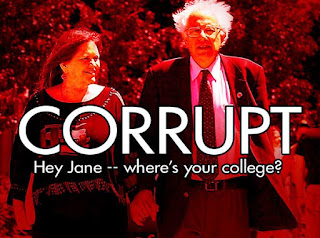 Bernie's current "burn the Establishment" pose is pure hypocrisy. All of his political life, he has been the recipient of unearned political largesse from the Democratic Establishment -- starting with his first election 1990. That's when the Establishment was so terrified of going with a female named Dolores Sandoval that they decided to back a non-Democrat named Bernie Sanders, who had the advantage of penis-ownership.

And Bernie has been the Democratic insider in Vermont ever since. He was a member of the clique. His arrangement with the Establishment was such that they never ran a serious Democratic challenger. Go here for the full story.

Now we are told that Bernie has quietly reassured the Democratic leadership that he will get in line for the Stop Trump effort. He's lying.

Remember when he said that he would never run a negative campaign? That was a lie. He lied then; he's lying now.

Remember Mars Attacks? Remember how the attacking Martians would broadcast the message "Do not run; we are your friends" just before the big zap?

That's what Bernie is doing now. It's obvious.

All across the internet, the Bernie fanatics are still running Clinton-hate propaganda -- much of which is bought-and-paid-for astroturf. It's easy to gin up mob hysteria, if you have enough money.

We still see plenty of examples of mob activity. When Politfact demonstrated that the BernieBots lied about Nevada, the Bots respond that Politifact is a right-wing organization. If you point out that Politifact has skewered pretty much all of the Republicans, even Kasich, the BernieBots will simply mutter their usual inanities about the all-pervasive Evil Clinton Conspiracy.

Remember: This is astroturf -- an online rent-a-mob. They are paid to lie. 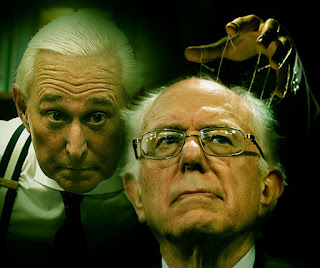 Roger Stone and his confreres have controlled every other "progressive" split within the Democratic movement for 40 years. It all started with Nixon -- with the Gemstone plan. Project Coal was part of that. Pursuant to that plan, the Republican party secretly funded Shirley Chisolm.