I've been getting a lot of hate mail today. A lot.

Please send more! This reaction tells me that I must be onto something in my ongoing research into the Bernie Sanders-Roger Stone connection. As they say: You don't get flack unless you're over the target.

Why won't my critics read the necessary background material on Roger Stone? Laziness is only part of the answer. The truth is, the BernieBots are cowards. They're terrified of discovering evidence that they've been manipulated by a Republican ratfucker.

I've been trying to do some original research. It hasn't been easy: When you're an A-list or B-List blogger, people answer your phone calls and respond to your emails. But when you're at C-level, you don't get respect. Still, I'm comfortable here. The great virtue of C-level is independence: I work for no-one and can piss off whomever I please. And despite the obstacles, I'm making headway on the Sanders/Stone story.

The greatest danger facing the nation today is Bernie Sanders, the Frankenstein monster created by Republican hit man Roger Stone. The quickest way to prove the point is to check out the positive press that Sanders continually receives from the Breitbarters. That's a tell, folks: Breitbart is a functional arm of the Trump campaign -- and if they are saying kind words about Bernie, then Bernie should also be considered an arm of the Trump campaign.

It has been Stone's practice for decades to use a "progressive" puppet to fracture the Democrats and to smear the most effective Democratic politicians. That's his "go to" gambit.

This Politico piece comes close to the truth, although the author can't see the strings connecting Puppet Bernie to Puppetmaster Stone: 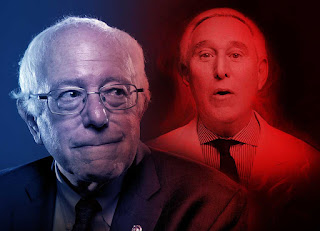 But in presidential campaigns, the one resource that’s never renewable is time. Zombie candidates can’t win the nomination, but they squander vast amounts of time and slowly chip away at the prohibitive front-runner. Some of the damage is obvious—the endless series of public dents in the candidate’s reputation; some are subtle, noticeable in ways that perhaps only political operatives can appreciate.

There was something surreal about knowing that doomed campaigns of fellow Democrats were aggressively peddling opposition research, and that candidates whose fates had been sealed were still publicly labeling their party’s soon-to-be nominee as “the handmaiden of special interests.” We were forced to respond. We were forced to spend limited money on the airwaves, buying time to run ads that would be long forgotten by November—all while an incumbent Republican president stockpiled resources. We were less than four years removed from watching Ralph Nader and disaffected liberals throw an election to Bush, yet these flailing campaigns seemed incapable of resisting the danger of repeating that mistake by damaging their own standard-bearer. Political campaigns can do many things, but they cannot recover lost time. The friendly-fire attacks compounded the difficulty of responding effectively to the parallel attacks made by Republicans. It postponed the work of unifying the Democratic Party and absorbing our rivals’ best operatives into our apparatus. It wasted campaign funds that could’ve been put to better use in the general election. And it stalled our ability to shift the campaign’s schedule and resources into an effort that could win the presidency, instead of one that would merely follow a nominating calendar.

What’s the alternative for Sanders? If he is serious about creating lasting political change—and I believe he is—he should start a national movement to drive money out of politics. Sanders could harness his enormous grass-roots fundraising network and the cash it has stockpiled—and can replenish repeatedly—to elect candidates from the White House to the Congress to the state and local levels who are committed to repealing Citizens United.

He could target Senate Republicans in states like New Hampshire, Wisconsin and Pennsylvania, inspiring voters there to “feel the Bern” and defeat the incumbents. He could hold those new senators accountable and enlist them in his quest to rid big money from the political system.

He could help Hillary Clinton win big and sweep in a Democratic majority in the Senate. He could become a powerful committee chairman. He could return to the next Senate as one of its most influential players.


Sanders won't do any of that. I'm not offering a prediction: I'm stating a hard fact.

Why? Because Bernie Sanders is playing for the Republican team. He has been compromised. He is not his own man. He is a puppet.

I am increasingly convinced that if Bernie does not do as Roger commands, Roger will make sure that the world knows what's in those tax returns that the Sanders family has been hiding. Roger may even tell the truth about the inherent corruption of "small" donations.

Here's a big hint: "Small" = Anonymous. You can anonymously hit the donate button a zillion times, as long as each donation stays under fifty bucks. Don't believe me? Call up the FEC as I did. They'll tell you that the campaigns are utterly self-policing when it comes to anonymous donations. They'll even helpfully direct you to page in the handbook where all of this is spelled out.

Again: That's not a prophecy. It's a fact. Watch it happen.

I was right about Obama in 2008, when all of you "progressive purists" told me that only a racist would dare to question his Messiahship.

I was right about Nader in 2000, despite all of the progressive purists who insisted that Al Gore was Hitler II. (Amusingly, nobody can now remember the reasons why Gore was so despised by all good lefties.)

Goddammit, I'll just come right and say it: My record on these things is excellent. Your record is shit, progs.

Sure, on other matters, my predictions often go awry and my interpretations can be terribly flawed and wrongheaded. But on these calls, I am always right. Whenever a frenzied prog mob screams at me to bow down and worship the latest prog Messiah, my cynical reaction is always justified by later events.

Y'see, I learned from my mistake back in 1980. That was the year of the John Anderson "third party" campaign which crippled Jimmy Carter. At the time, the progs all adored John Anderson because he was endorsed by Doonesbury and Saturday Night Live. If you didn't support Anderson, you couldn't join Club Hipster.

Guess what? The Anderson campaign was just another Roger Stone scheme. Bet you didn't know that. At the time, nobody would have believed that assertion.

Every election season, the purists join the latest cult of personality -- Anderson, Nader, Obama, Bernie -- and the progs get pluperfectly pissed off whenever I refuse to swig the same Kool-Aid to which they've become addicted.

Roger Stone and his fellow ratfuckers are like Lucy in the Peanuts comic strip, always holding up that "purity football" -- and progressives are like Charlie Brown, always thinking that this time, things will be different.
posted: 7:22 PM