I'm still not ready for more election-year aggro. So we're keepin' it light this weekend. This one's just for fun.

I've been feeling nostalgic for the old country -- i.e., my home state of California. So I spent several hours touring the Mojave via Google Earth. Much has changed. 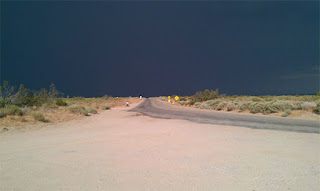 A few of you may recall an earlier piece in which I discussed an intersection outside of Lancaster, on the edge of nowhere -- Rosamund and 170th Street West, thirty miles west of Edwards Air Force Base. Back in the day, I went "legend tripping" out here on many a night. Imagine your humble narrator parked on that very stretch of dirt in the wee small hours.

Why come here? Back then, local "fringe" researchers were lured to this place by rumors of strange things a-happening within line of sight of that corner. Somewhere "out there"...in the wilds beyond...one could see.....certain........things.

Many of the rumors focused on Fairmont Butte, which lies just west of that intersection. The wildest stories spoke of a secret military base built within the Butte, connected by tunnel to Edwards.

That claim was too over-the-top even for me.

Now, I won't detail the precise nature of the other rumors I heard. They were silly. I felt silly when I tried to investigate them. This blog is not a place for such nonsense. Suffice it to say that I saw nothing to budge me away from my native skepticism.

And yet I kept coming back. There's something about the California desert -- terrifying in its solitude, magical in its immensity. I loved it there. (Also, if you take adventuresome girls to a place like that, they get all goose-pimply and scared. A good kind of scared.)

As noted, much has changed: A new wind farm has transformed the landscape. Studying the wilds just north of those towers -- about seven miles north of "my" intersection, in a place where the desert slams into the Tehachapi mountains -- I noticed something odd. 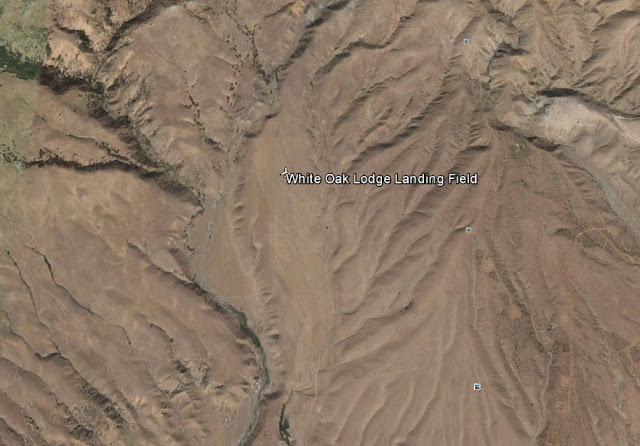 That's no landing field, even though it is so labeled. If you zoom in very close, you'll see a very, very narrow dirt trail in that area. It's barely fit for a Jeep. There are no buildings of any kind nearby, and no roads to take you to civilization.

Fire up Google, type in "White Oak Lodge Landing Field," and you'll find no useful information to be found anywhere on the internets. A few desultory pages list it as an "airport."

(And no, it's not one of the disused WWII-era airfields which one can find in other parts of the Mojave. Those places are all well-known; there's a website devoted to keeping track of them. Those old fields are usually triangular, and they show up very clearly on satellite imagery.)

Using Google Earth's historical imagery, I was able to gauge how the area has changed over the years. In the 2013 images, in a gulley just north of the Landing Field, I found this: 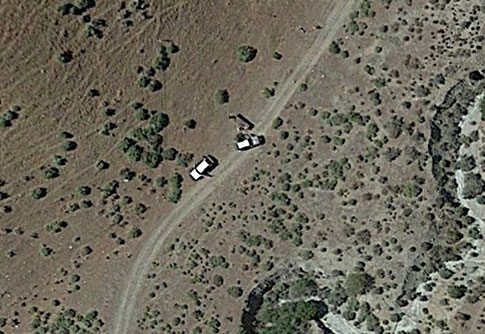 Those look like a couple of the infamous white trucks, on a dirt road that was recently much improved.

You're probably thinking: So? Who cares about a couple of white trucks? Let me explain.

Back in the naughty 90s, such vehicles became well-known to those of us who  enjoyed scouting out "secret" defense installations in the Mojave. I'm talking about the places discussed by the marvelous Tom Mahood, an engineer who functioned as a God of Reason in a very paranoid time and place. He ferreted out an awesome amount of hard-to-get info concerning things which the Gummint did not want normal folk to learn.

We all saw brand-new full-sized white trucks zooming in and out of locales where high-tech "stuff" was being tested. (They also go in and out of Area 51.) One morning, while hanging out at "my" intersection, I saw one such truck zoom past me and speed down the dirt trail leading to the quasi-infamous Fairmont Butte.

Now, you may think that I'm making mountains out of molehills, and perhaps I am. Nevertheless, I felt compelled to do further research into this "Landing Field." I came across an account titled "Secret Runway outside Edwards AFB," written by someone named Kevin, although he favors the screen name KAKUSA.

If you're wearing a hat, hold onto it:


5 years ago myself, my brother and his family were living in Rosamond Ca. located just outside Edwads AFB. One day my brother a 2 friends went ATV riding in the mountains at the end of 136th St in a remote area of the Tehachapi mountains. As they were riding along a strange looking almost silent plane flew over head made a banking turn and disappeared below a mountain ridge. They rode to the top of the ridge thinking the plane was crashing only to see it taxing to a opening in the side of the mountain at the end of a runway in the valley. He said the runway and doors to the opening were completely camoflouged to look like the desert terrain and was almost indistinguisable from the surrounding desert. At that time about 3 white trucks seemed to pop up out of the desert floor from nowhere and head thier way, needless to say they hauled ass and left the area. My brother drew a picture of the plane which he discribed as a "BAT PLANE", it was about the size of the B1 bomber, with NO visable engines and almost silent.

I have included a Google Earth sceen shot of the approx: area if any members would like to help search and find this runway...

Yes, there are a lot of typos in this passage; I've decided not to correct them. The reference to "136th St" puzzles me; I could find no road with that name. And this area is not really "just outside" of Edwards AFB.

Nevertheless, Kevin's Google Earth image leads me to believe that this "secret opening" is real, and that it exists somewhere in the vicinity of the so-called White Lodge Landing Field. Kevin also provides a crude outline drawing of the ultra-silent "Bat Plane" seen by his brother. This shape really does resemble the vehicle flown by Bruce Wayne in Tim Burton's first Batman movie.

If you click on the above link and read the comments, you'll find that many readers were initially skeptical of the claim made by KAKUSA. His responses seem reasonable. Frankly, I'm inclined to stipulate his credibility.

Which leads me to my big question: Do you think that there is anything to this? Can there really be a large underground facility, expertly hidden at the foot of the Tehachapis?

Or have I let a romantic imagination temporarily get the better of me? 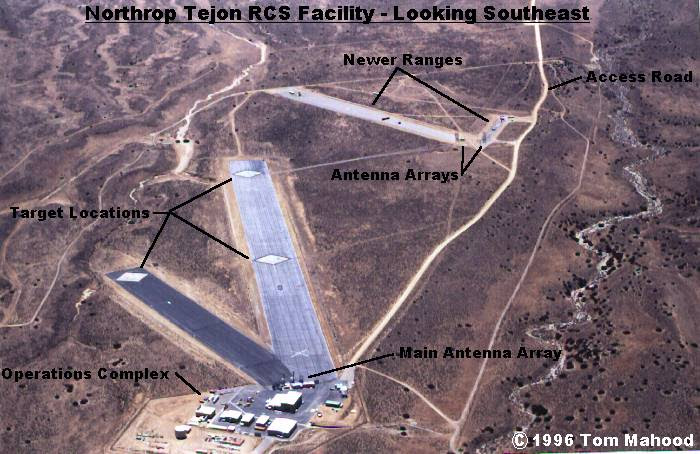 The Northrup RCS facility. If you look up the Airport-That-Isn't on Google Earth, you'll notice a very elaborate installation roughly two-and-a-half miles to the southwest. Although Google won't give you a name, this place is not really a secret anymore: It's the Northrup RCS Facility. RCS stands Radar Cross Section.

This is one of several hidden facilities in the desert (technically owned by private companies) where the military tests the stealthiness of various vehicles and components. I believe that these facilities were built in the Reagan years, when a massive military build-up opened the funding spigot, and stealth technology was The Next Big Thing.

The Northrup site has had a difficult time of it lately. The company furiously opposed the installation of that nearby wind farm: It seems that the windmills can interfere with the radar tests. I don't claim to understand how the science works; if interested, go here and scroll down for the observations of one Shadowhawk.

UPDATE: On a return visit (via Google Earth) I found a small "ranch" -- note the quotation marks -- not too far from the southern end of the Landing Strip. This is the only allegedly civilian structure for miles and miles around.

Through the magic of Google Earth's historical imagery, I discovered that this particular ranch has grown quite rapidly in recent years. When I first discovered this region, there was nothing there.

Ya think maybe this ranch is something other than a ranch?  By the way: The Landing field is nearly 7000 feet long. That's long enough for most airplanes, though not a jumbo jet. 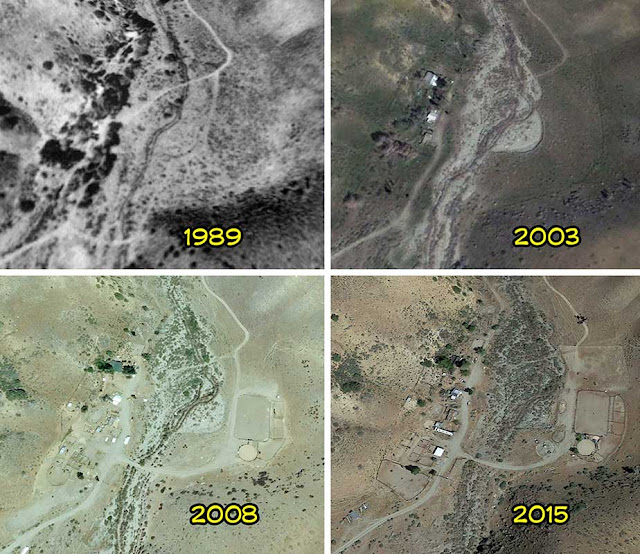