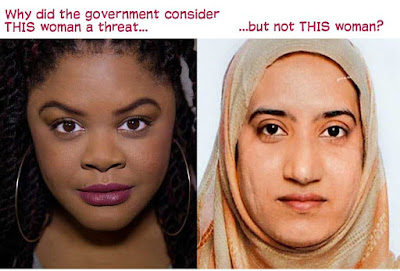 I keep telling you people not to use Facebook...


Tashfeen Malik, who with her husband carried out the massacre in San Bernardino, Calif., passed three background checks by American immigration officials as she moved to the United States from Pakistan. None uncovered what Ms. Malik had made little effort to hide — that she talked openly on social media about her views on violent jihad.

She said she supported it. And she said she wanted to be a part of it.

American law enforcement officials said they recently discovered those old — and previously unreported — postings as they pieced together the lives of Ms. Malik and her husband, Syed Rizwan Farook, trying to understand how they pulled off the deadliest terrorist attack on American soil since Sept. 11, 2001.

Had the authorities found the posts years ago, they might have kept her out of the country. But immigration officials do not routinely review social media as part of their background checks, and there is a debate inside the Department of Homeland Security over whether it is even appropriate to do so.


Okay. Okay. I'm trying to get my head around this.

What really stuns me here is the fact that she posted that stuff in the first place.

You're a jihadi-minded lady and you come to America, hoping to skulk in the shadows until the Day of Action dawns. Would you really plaster your Facebook page (or whatever) with "ISIS is awesome" messages? Let's put it another way: If you were a mafia hit man, would you keep a Twitter feed in which you announce to the world "Hi! My name is Frank and I kill people for da Mob! Here are some images of my greatest hits..."

I know that many people now feel compelled to share with the world every teensy tiny little thought that might enter their teensy tiny little minds. But one would think that an undercover operative crossing international borders would still appreciate the old-fashioned value of privacy.

It is staggering to contemplate the notion that Tashfeen and Syed escaped the "no fly" list when so many obviously innocent individuals have appeared on it.

In this country, individuals who choose to protest police abuses -- that is to say, citizens exercising a constitutional right -- are photographed and identified.


Examples are everywhere, from the controversial Long-Range Acoustic Device (LRAD) sound weapons used to disperse crowds to secretive mass surveillance devices, commonly known as stingrays originally developed for the US Navy, which police use to track cell phones, often without a warrant. Earlier this year, police in India began equipping aerial drones with pepper spray cannons to use on crowds of protesters. In August, North Dakota became the first US state to allow the same; a new law drafted by a drone lobbyist permits North Dakota cops to arm drones with pepper spray, tasers, and other “less-than-lethal” weapons.

The FBI has admitted that it flew surveillance planes equipped with high-resolution cameras over the Black Lives Matter protests in Ferguson and Baltimore, Maryland—part of a secret program that has monitored over 30 major cities from the skies using aircraft registered to fake companies. And in New York City, the NYPD has outfitted unmarked white vans with advanced X-ray equipment capable of seeing through walls and even people's clothes.

We've been told repeatedly that we need to let the government use intrusive surveillance techniques in order to fight terrorists. Nonsense. The government and the cops want to stifle protesters, not to catch terrorists.


A telling comparison. The way Tashfeen Malik sailed past our "guardians at the gates" seems all the more appalling when we look at the government's scrutiny of Black Lives Matter protestors. If you participate in that movement, prepare to have Uncle study your every online footprint...


Documents from a "crisis management" report produced by the cybersecurity firm ZeroFox indicate that the firm monitored Black Lives Matter protesters during the Freddie Gray protests in Baltimore earlier this year. The documents, which surfaced online last Wednesday, also state that the firm "protected" the online accounts of Maryland and Baltimore officials and members of the Baltimore Police Department and Maryland National Guard.

The report identifies DeRay McKesson and Johnetta Elzie, two prominent Black Lives Matter organizers who took part in the Baltimore protests, as "threat actors" for whom "immediate response is recommended." It describes McKesson and Elzie as "high" severity, "physical," and "#mostwanted" threats and notes both have a "massive following" on social media. It says that ZeroFox was engaged in "continuous monitoring" of their social media accounts and specifies their geographical locations at the time of the report. The report does not suggest that the pair were suspected of criminal activity but were "main coordinators of the protests."

In emails exchanged in April, ZeroFox's CEO, Baltimore Mayor Stephanie Rawlins-Blake's chief of staff, and the president of the Maryland chapter of an FBI intelligence partnership program discussed ZeroFox's potential surveillance "help" for Baltimore. These emails were released to the Baltimore Sun last week following a public records request. The emails also indicate that ZeroFox "briefed our classified partners" at the Fort Meade Army base in Maryland on "intelligence" it had collected during the Gray protests. Other emails from the Baltimore Police Department indicate the department had collected "intelligence regarding potentially violent agitators."

McKesson says that during last year's protests in Ferguson, he and other prominent organizers became suspicious that they were being monitored by local police officials there as well. On numerous occasions, he says, they interacted with police officers that knew their names and Twitter accounts. "The police officers in St. Louis knew us. They knew many of us by Twitter handle. It was clear they read our Twitter feed. It was clear they watched the live streams [of protests]," he says.

The parallel is damning.

The authorities considered DeRay McKesson and Johnetta Elzie -- two American citizens who committed no crimes -- worthy targets for spying. Fortune Magazine named these two admirable individuals among the greatest leaders in the modern world, praising their "nonviolent protest." This interview with Johnetta is a portrait of someone who should be considered a model citizen. If that young lady were my daughter, I'd be very proud.

Yet the government is so concerned by this woman's Twitter feed and Facebook usage that they have discussed her case at NSA headquarters.