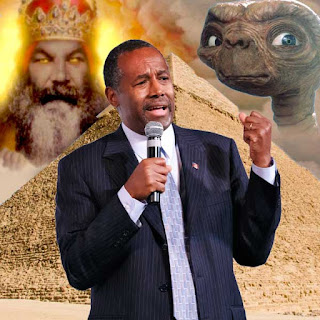 Do you think that Ben Carson learned about neurosurgery by trepanning his own skull? That would explain a lot.

Everyone's chuckling about the Republican frontrunner's first foray into Egyptology...


At the 1998 commencement for Andrews University, a school associated with the Seventh-day Adventist Church, Carson also dismissed the notion that aliens were somehow involved in the construction of the pyramids.

“My own personal theory is that Joseph built the pyramids to store grain,” Carson said. “Now all the archeologists think that they were made for the pharaohs’ graves. But, you know, it would have to be something awfully big if you stop and think about it. And I don’t think it’d just disappear over the course of time to store that much grain.”

“And when you look at the way that the pyramids are made, with many chambers that are hermetically sealed, they’d have to be that way for various reasons. And various of scientists have said, ‘Well, you know there were alien beings that came down and they have special knowledge and that’s how—’ you know, it doesn’t require an alien being when God is with you.”

I don't know whether aliens exist, but if they do, I presume that they would be bright enough to avoid this ghastly rock. My question: Which "scientists" were saying that aliens built the pyramids? May we have some names...?

Yeah, I'd love to hear Carson talk about that guy.

You know what's really frightening? For millions of Americans, Carson is the only candidate addressing the real issues: Aliens, pyramids, Jesus, and those Wall Street bolshies.
posted: 9:33 AM