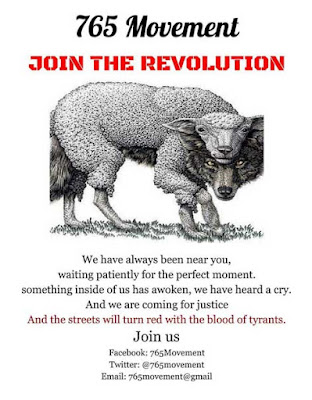 A couple of days ago, we discussed the New York Post's story about an alleged anarchist plot to attack cops on Halloween. According to the Post, the anarchist group calls itself the National Liberation Militia, and they plan to do their dirty deeds in Halloween masks. The goal is to make every cop in America paranoid about anyone who might happen to be wearing a mask on Halloween night.

Without doing any further investigation, the conservative media infrastructure picked up on that NY Post story. In short order, and without citing any evidence, right-wing writers "revealed" that this so-called National Liberation Militia had links to the Black Panthers and to the 1999 anti-WTO protesters in Seattle. (In the real world, the two are unconnected.)

From the start, I was skeptical of the Post's story.

I could find no trace of a National Liberation Militia anywhere on the "open" internet, aside from this empty Facebook page. Neither the national FBI press office nor the New York City FBI press office has issued any warnings. The very name "National Liberation Militia" seems unlikely, since anarchists usually eschew nationalism, and the word "militia" has positive overtones only in the minds of the Christian far right.

Nevertheless, I couldn't shake the suspicion that this story might have something to it. So I kept an eye on it.

Finally, I discovered a document uploaded to Google Drive which offers much information while raising new questions. Here it is.

As it turns out, there is a group calling itself the National Liberation Militia. It arose out of the Anonymous movement. They communicate via mobile devices, Twitter, social media, and (in all likelihood) the dark net. We don't know how many people are in this "militia" or how influential it is, although I suspect that adherents are relatively few in number. 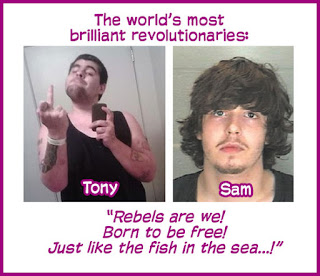 The NLM is allied with another Anonymous spin-off, called the 765 Movement or the 765 Anarchists. This online gathering of self-described cop killers arose last year.

Two young members of this group, Samuel Bradbury and Anthony Gonzales, attracted headlines after Bradbury made the oh-so-brilliant decision to post threats against certain judges and policemen -- on Facebook.

As Abbie Hoffman once noted, the first task of the revolutionary is to get away with it. Sam and Tony failed Lesson One.

There don't seem to be very many other members of the 765 movement, although our two Towering Intellects, Tony and Sam, do have an associate called Janet Leigh (!). There is another 765-er who uses the sobriquets "Ethan Allen" and "Andie Chryst;" his real name may be Tyler Hans Larsen. You may want to check out this Facebook page and this Reddit dialogue.

I don't know the meaning of the "765" nomenclature -- and to be honest, I don't care. Their "wolf in sheep's clothing" imagery seems quite appropriate.

According to the above-linked document, Larsen/Chryst/Allen went on to organize the National Liberation Militia. The document lists a number of NLM members; apparently, the group links up with the "Oath-Keepers" and people in the military.

Members are said to include Mary M. Kidwell, Lynn Jackson, Gabe Wade (a.k.a. "Loki"), Megan Blaker, Mike Jantzen, Trish McIntyre, Derek Zukoski, Brittany Shephard (a.k.a. Scarlet Witch), Josh Springer, Conner Bigwood, "Rusty Shackleford" (!!), a "coordinator" named Geoffrey Librom, and about twenty other people. I don't know if these are pseudonyms or birth names. (Questioning the veracity of "Conner Bigwood" is a task best done by a writer who does not have my last name.)

Nota bene: Readers should understand that I am not accusing any of these people of any illegal or unethical acts.

All of these people have a presence on Facebook -- because, as everyone knows, Facebook (funded by In-Q-Tel, an arm of the CIA) is the safest place to plan an insurrection.The afore-linked Google Drive document includes snapshots of their Facebook pages.

That document was written by a member of Anonymous who feels that calls for Halloween violence (with follow-up fun planned for November 5) carry the distinct reek of the agent provocateur. The purpose of this operation is to bring discredit to all Anonymous members, to all anarchists, and to all American dissidents.

The author of this strange text believes that "Ethan Allen" is the mastermind of this plot. At least, I think that this is what the unnamed writer is saying. The problem is all too common: Individuals who join a subculture become so thoroughly enmeshed in their insular world that they lose the ability to speak comprehensibly to normal people. "In group" concepts can be hard to explain to outsiders like you and me.

All of which brings us to a more troubling problem. To put it bluntly: The current batch of Anonymouseketeers just ain't that smart.

The media would have you believe that Anonymous is a loose-knit network of hyper-bright hackers. That's the impression one gets from Parmy Olson's book We Are Anonymous and from any number of news stories (not to mention the Elementary TV series). I was therefore a little surprised to learn the truth about what the group has devolved into.

An influx of reactionary young ninnies have turned Anonymous into the latest iteration of the militia movement. These ill-read infants are filled with an inchoate longing for some sort of uprising, even though they lack the mental chops necessary to formulate a coherent philosophy.

Perhaps unsurprisingly, their ranks include a number of Ayn Randroids filled with Nietzschean delusions of Supermanhood, while others come from a fundamentalist Christian background. For example, this Anonymous member is a creationist who thinks that The Lord has given him the ability to prophesy coming events. Some Anonymous-iosi combine the familiar Guy Fawkes mask with guns and military gear.

(See the image below. What would dear old Alan Moore, a reasonable man of liberal leanings, think of that?)

Imagine what John Reid would have been like if the guy had been raised by bears and could speak only in grunts and howls. Imagine what Che Guevara might have been like if Walter Freeman had gone to work on his brain with an icepick the size of a tire iron. That's the kind of "revolutionary" we're dealing with here. 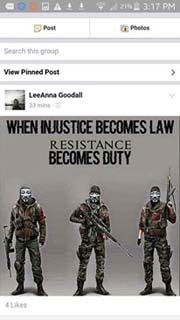 These kids seem to have nothing in their noggins but conspiracy theories -- really, really stupid conspiracy theories. You know what I'm talking about: The Illuminati and the Freemasons and Building Fucking Seven and god-knows-what else. They also believe every absurd story you ever heard about Those Horrible Evil Cat-licks. How can anyone don the Guy Fawkes mask without researching what Fawkes stood for?

As I've pointed out on many previous occasions, the most dangerous dummies in Dummyland are the dummies who think that they're hipper than everyone else.

The National Liberation Movement may indeed be a kind of FBI flytrap or front group. I wouldn't be even slightly surprised to learn that such was the case.

Bottom line: Yes, there really is a National Liberation Militia. Though not a large group, it's just sizable enough to cause mischief. It may or may not be an example of what Frank Kitson called a "pseudo-gang."

Nowadays, you would have to be an idiot to wear that Guy Fawkes mask. Anyone can wear that same mask. A provocateur, properly costumed, may get up to all sorts of heinousness -- and guess who gets the blame? You do.

In all likelihood, this Halloween will be as peaceful as any other. But if the numbskulls of NLM do commit any noteworthy acts of violence or vandalism, the beneficiaries will be America's reactionaries. As usual, lefties and black people will get the blame.

Added note: Only oldsters like me will recognize the song "Rebels are we." Can anyone out there name both films in which that song was heard? Naturally, I also expect you to name the director.
posted: 8:16 AM