Donald Trump has taken the "No independent run" pledge, which means that he has unilaterally disarmed himself. Previously, the GOP establishment had to restrain itself as it attempted to derail the Trump Train. Now, those restraints are gone.

If Trump were to break the pledge he just gave, would his supporters feel betrayed? Doubtful. "Promises are like pie-crusts: Made to be broken." This quote -- wrongly attributed to Lenin -- accurately sums up a certain political reality. If the GOP establishment knocks The Donald out of the race, and if he can plausibly argue that the blow was low, he'll probably consider The Pledge to be null and void.

What's the worst they could do to him? Deny him a speaking slot at the convention? Big deal. 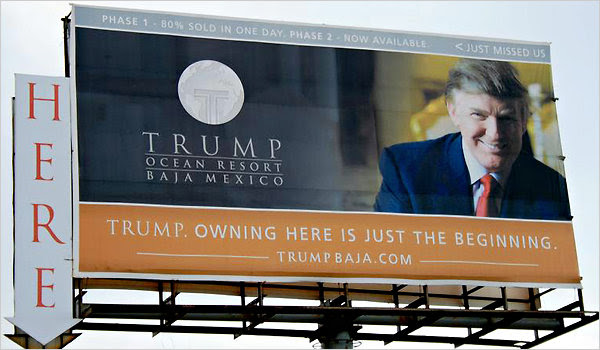 Here's something they could use against Trump.  Esteemed reader Alessandro Machi offered the following as a comment to our previous Trump post:


Many years ago at the end of an Apprentice season the prize given to the non-celebrity apprentice winner was overseeing luxurious condos that were going to be built either in Florida, California, or Mexico. People watching the show called in to make down payments on these condos for anywhere from 100,000 to 250,000 dollars.

The condos were never made and the investors LOST all their money. These were middle class people with 401'Ks who figured buying a condo on the front end on the cheap would be a terrific investment because they would get to own it outright, live in it, and the value would grow. Instead the investors lost all their money. The weirdest part was NOTHING GOT BUILT. It's not like the condos got built halfway, or only half of the condos were made, NOTHING was made but the artist drawings and probably very little else. How did Trump get away with that? If he is going to brag about what a great businessman he is, he has to address CondoGate and explain why a multi-billionaire did not give even a partial refund to his blue collar investors.

(Actually, that's not exactly how the story shook out, as we shall soon see.) One wonders why Trump would need to indulge in such behavior, if he truly has the kind of money he claims. The following comes from a 2011 NYT story:


But as Mr. Trump, who is weighing a bid for the White House, has zealously sought to cash in on his name, he has entered into arrangements that home buyers describe as deliberately deceptive — designed, they said, to exploit the very thing that drew them to his buildings: their faith in him.

Over the last few years, according to interviews and hundreds of pages of court documents, the real estate mogul has aggressively marketed several luxury high-rises as “Trump properties” or “signature Trump” buildings, with names like Trump Tower and Trump International — even making appearances at the properties to woo buyers. The strong indication of his involvement as a developer generated waves of media attention and commanded premium prices.

But when three of the planned buildings encountered financial trouble, it became clear that Mr. Trump had essentially rented his name to the developments and had no responsibility for their outcomes, according to buyers. In each case, he yanked his name off the projects, which were never completed. The buyers lost millions of dollars in deposits even as Mr. Trump pocketed hefty license fees.

Those who bought the apartments in part because of the Trump name were livid, saying they felt a profound sense of betrayal, and more than 300 of them are now suing Mr. Trump or his company.

“The last thing you ever expect is that somebody you revere will mislead you,” said Alex Davis, 38, who bought a $500,000 unit in Trump International Hotel and Tower Fort Lauderdale, a waterfront property that Mr. Trump described in marketing materials as “my latest development” and compared to the Trump tower on Central Park in Manhattan.

“There was no disclaimer that he was not the developer,” Mr. Davis said.

Investors sued, and Trump arranged a settlement in 2013. (This is a point that Mr. Machi should have mentioned.) But even the settlement revealed that the whole operation was rather cheesy...


Trump told The Times that the developers were to blame, saying he merely licensed his name to the 525-unit oceanfront project and was not involved in building it.

It was not an unusual arrangement for Trump. He made his name in real estate and casino development but now is best known for his reality TV hit, "The Apprentice," and frequently licenses his name to real estate projects that are managed by other developers.

Again, one wonders why someone who has the kind of money that Trump claims to have would do this kind of business. I can't think of a parallel to found anywhere in the annals of the ultra-rich. Can you? I mean, John D. Rockefeller did not license out his bird-like profile to be plastered all over ads for dubious enterprises...
posted: 11:32 PM