When I read the article at the other end of that link, I thought: How many times have we seen this process play out? Bohemians (or "hippies," as they were called during one brief historical moment) shout "Freedom!" and initiate Coolness. Rich people respond: "Yeah! Freedom! Freedom for the rich to take over!" -- and then they turn Coolness into Uncoolness.

Many people don't know that the Bohemian Grove -- you know, the thing with the giant owl -- also began with a group of artsy types from San Francisco who sought to create an anything-goes enclave out in the woods. It didn't take too long for a bunch of stuffy bigwigs to take over the show.

This pattern will continue until a new generation of Bohemians finally understands that the pattern is a pattern. Next time the artists and visionaries and crazies construct a Bohemian enclave in the wilderness, they have to erect barriers against the One Percenters: "Sorry, but this is an exclusive club. Only actual human beings are allowed inside. You wouldn't understand."

Speaking of the Bohemian Grove: I just found the damnedest photo... 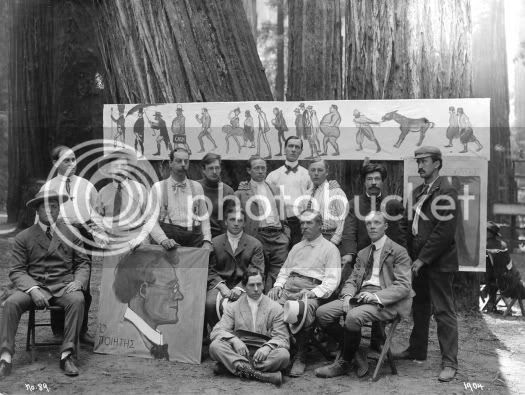 This is a picture of various members of the Bohemian Club in the woods circa 1904. (The Bohemian Club founded the Grove.) The painting is of none other than Gustav Mahler, then very much alive -- in fact, his best work was ahead of him. Now considered one of the world's greatest composers, Mahler's music was, at that time, thought to be unfathomably avant-garde; he was famous as Vienna's most celebrated and controversial conductor. It seems that his fame had spread to the redwoods of California.

Why had the club fixated on Mahler? Perhaps because he was literally a scion of Bohemia, being born in the center of what later became Czechoslovakia.

There's another possible explanation. In the 19th century, a secretive artist's society called the Schlaraffia (a German term for "fairyland") sprang up. Mahler belonged to this group, although I doubt that he took it very seriously. It was a bit like the Dead Poets Society, and their symbol was the Owl of Minerva (goddess of Wisdom). Writer Terry Melanson argues that the Schlaraffia may have given birth, so to speak, to the Bohemian Club.


There was a branch of Schlaraffia instituted in San Francisco as early as 1884, so there is the possibility of real connections and influence among the two groups.

(He meant "between the two groups.") The intersection of Bohemia and Big Money always seems to fascinate the more easily-gulled conspiracy researchers. Artsy-fartsy Bohemian-types love to play with symbols and riddles and mystical murkiness. Conspiratards consider all of that stuff to be very spooky and scary. Most conspiratards are poorly-educated Christian fundamentalists, and when these apes try to comprehend what the Bohemians have been getting up to, hilarity ensues.
posted: 11:50 AM