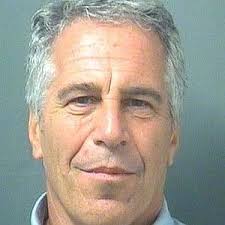 A court filing in a civil case in Florida last week included new allegations against Jeffrey E. Epstein, a businessman who pleaded guilty to soliciting prostitution, and two other high-profile men: a member of the British Royal family and an American lawyer.

The motion filed in United States District Court in the Southern District of Florida alleges that Mr. Epstein forced a teenage girl to have sexual relations with several men, including Prince Andrew, Queen Elizabeth’s second son, and Alan M. Dershowitz, a professor emeritus at Harvard Law School. Both men have denied the allegations.

Jeffrey Epstein is not just a businessman. He's a billionaire, and he has already been convicted of soliciting underaged prostitution.

About the royal: Some of you may argue that if there was an encounter, the Prince may have been unaware of the girl's age. He has people. People who make arrangements for him. One can see how such a fellow might hear the same knock on the door that Neil Bush once heard. Perhaps, upon opening the door, his first reaction was something other than "May I see your ID, Miss?"

That scenario seems plausible. However, as we shall see, that scenario is not what has been alleged.

We will get to the Prince in a bit. For now, let's focus on Dershowitz. 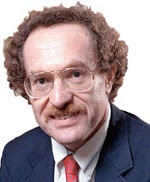 On Saturday, Mr. Dershowitz said he “categorically and unequivocally” denied all of the allegations. He said he would file disbarment proceedings against the lawyers who filed the motion, Bradley J. Edwards, a lawyer in Florida, and Paul G. Cassell, a former federal judge and a law professor at the University of Utah.

“They are lying deliberately, and I will not stop until they’re disbarred,” Mr. Dershowitz said in a phone interview.

The very predictability of that furious reaction means that no lawyer would have filed such charges against Dershowitz frivolously. Cassell has an impressive resume. He's not a young go-getter out to make a name for himself.

I understand that there are a lot of women who have made iffy claims against famous people. But this case seems different. Epstein has already pled guilty. Moreover, Dershowitz was part of Epstein's legal team. 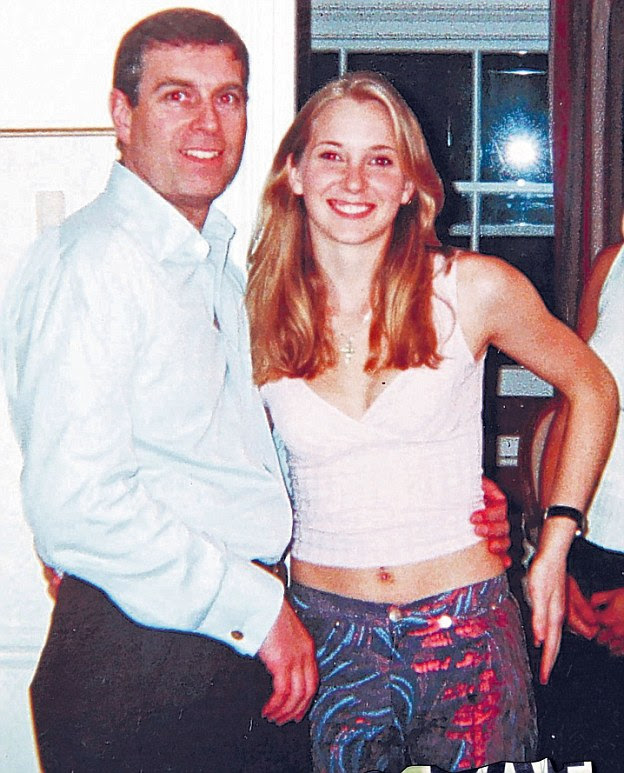 The full court filing was published on Mondoweiss a couple of days ago. We learn that the complainant, Jane Doe #3, was 15 years of age,and that she was recruited by an Epstein associate named Ghislaine Maxwell, daughter of Robert Maxwell (the late news tycoon and known Mossad asset). The photo to the left shows the Prince with the girl who seems to have been Jane Doe #3. Allegedly, the shot was taken by Epstein. (Note: In what follows, the term NPA refers to non-prosecution agreement.)


Epstein then became enamored with Jane Doe #3, and with the assistance of Maxwell converted her into what is commonly referred to as a "sex slave." Epstein kept Jane Doe #3 as his sex slave from about 1999 through 2002, when she managed to escape to a foreign country and hide out from Epstein and his co-conspirators for years. From 1999 and 2002, Epstein frequently sexually abused Jane Doe #3, not only in West Palm Beach but also in New York, New Mexico, the U.S. Virgin Islands, in international airspace on Epstein's private planes, and elsewhere.

Epstein also sexually trafficked the then-minor Jane Doe, making her available for sex to politically-connected and financially-powerful people. Epstein's purposes in "lending" Jane Doe (along with other young girls) to such powerful people were to ingratiate himself with them for business, personal, political and financial gain, as well as to obtain potential blackmail information.

One such powerful individual that Epstein forced then-minor Jane Doe #3 to have sexual relations with was former Harvard Law Professor Alan Dershowitz, a close friend of Epstein's and well-known defense attorney. Epstein required Jane Doe #3 to have sexual relations with Dershowiz on numerous occasions while she was a minor, not only in Flroida but also on private planes, in New York, New Mexico, and the U.S. Virgin Islands. In addition to being a participant in the abuse of Jane Doe #3 and other minors, Dershowitz was an eye-witness to the sexual abuse of many other minors by Epstein and several of Epstein's co-conspirators. Dershowitz would later play a significant role in negotiating the NPA on Esptein's behalf. Indeed, Dershowitz helped negotiate an agreement that provided immunity from federal prosecution in the Southern District of Florida not only to Epstein, but also to "any potential co-conspirators of Epstein." NPA at 5. Thus, Dershowitz helped negotiate an agreement with a provision that provided protection for himself against criminal prosecution in Florida for sexually abusing Jane Doe #3. Because this broad immunity would have been controversial if disclosed, Dershowitz (along with other memebers of Epstein's defense team) and the Government tried to keep the immunity provision secret from all of Epstein's victims and the general public, even though such secrecy violated the Crime Victims' Rights Act.


There's a third named participant in these doings, one Jean Luc Brunel, a close Epstein friend and a scout for various modelling agencies.


He would bring young girls (ranging from ages as young as twelve) to the United States for sexual purposes and farm them out to his friends, especially Epstein. Brunel would offer the girls "modeling" jobs. Many of the girls came from poor countries or impoverished backgrounds, and he lured them in with a promise of making good money.

The Government was well aware of Jane Doe #3 when it was negotiating the NPA, as it listed her as a victim in the attachment to the NPA. Moreover, even a rudimentary investigation of Jane Doe #3's relationship with Epstein would have revealed the fact that she had been trafficked throughout the United States and internationally for sexual purposes. Nonetheless, the Government secretly negotiated a non-prosecution agreement with Epstein precluding any Federal prosecution in the Southern District of Florida of Epstein and his co-conspirators. As with Jane Doe #1 and Jane Doe #2, the Government concealed the non-prosecution agreement from Jane Doe #3 -- all in violation of her rights under the CVRA -- to avoid Jane Doe #3 from raising powerful objections to the NPA that would have shed tremendous light on Epstein and other powerful individuals that would likely have prevented it from being conlcuded in the secretive manner in which it was.

The document also mentions a Jane Doe #4, an impoverished sixteen year old who was told that she could make $300 by giving a "massage" to an old man in Palm Beach.

This matter seems very serious. We have too many details, too many corroborating witnesses (in the form of four Jane Does). We have a photo. We have reports of the existence of many, many more photos. The hugger-mugger involving the NPA seems downright ghastly -- yet all too credible.

Frankly, I would not rule out the possibility that Epstein was working for an intelligence agency -- either Mossad or one of our own. The Maxwell connection points to Mossad.

This whole business has "honeytrap" written all over it.

The Daily Mail discloses that one of Epstein's, er, protegees was a woman named Johanna Sjoberg. Since the story links her to Prince Andrew, it is tempting suppose that she is the aforementioned Jane Doe #3. However, British newspapers have named another young woman, Virginia Roberts.


Miss Sjoberg worked for Epstein for four years, often massaging him as he lay on a couch in his giant bathroom making phone calls to friends such as Bill Clinton and Cate Blanchett.

He kept a little black book, containing the numbers of all his masseuses by a phone in the bathroom, she said. She left after he started becoming 'more aggressive' in his demands that she 'do sexual things to him'.

She said she was aware that the girls recruited by Epstein and his acolytes were not paid just for massages but for 'sexual favours'.

Miss Sjoberg said: 'I'm not surprised he was sending girls abroad. I just did not think they were so young.'


The Prince strongly denies any claim of impropriety, of course.

What about Epstein and Clinton? Obviously, there is nothing wrong in taking a man's phone call, even a call from someone like Epstein. However...


Bill Clinton was also named dozens of times in lawsuits against Epstein and was alleged to have flown on his private jet more than 10 times.

Flight logs in lawsuits detailed that between 2002 and 2005 the former US President traveled around the world courtesy of his friend and stopped at Epstein’s Caribbean island Little St James where young girls were supposedly kept as sex slaves.

Clinton was deemed to be so close to Epstein that he was nearly deposed during the investigation into his paedophilia.

Before he was jailed Epstein’s other acquaintances are said to have been former Israeli Prime Minister Ehud Barak; former New Mexico Gov. Bill Richardson; and former Treasury Secretary Larry Summers.


Let's make the obvious point. If there is any evidence of wrongdoing against Bill Clinton, then Hillary's chances at the nomination are over. A candidacy can withstand many things, but a statutory rape scandal involving one's spouse? No.

More on the Clinton link here:


Over the years, the casually-dressed, globe-trotting financier, who was said to log more than 600 flying hours a year, has been linked with Bill Clinton, Kevin Spacey, Chris Tucker and Manhattan-London society figure Ghislaine Maxwell, daughter of the late media titan Robert Maxwell.

Reports in the US media say many of the A-list names broke off any links with the former maths teacher after his arrest and conviction in 2008 of having sex with an underage girl whom he had solicited. His arrest followed an 11-month undercover investigation at a mansion in Florida’s Palm Beach that Epstein owned.

In 2008, he pleaded guilty to a single charge of soliciting prostitution and was handed a 18-month jail sentence. He served 13 months in jail and was obliged to register as a sex offender. A 2011 report in the New York Post said that he celebrated his release from jail and his return to a property he maintains in New York – a 45,000-sq-foot eight-storey mansion on East 71st Street – with Prince Andrew.

The story goes on to give much useful information about Epstein's business dealings.


The financier, who was jailed for 18 months in 2008 after pleading guilty to solicitation for prostitution, kept a sickening stash of images on a computer seized at his Palm Beach mansion in 2006.

The six-year-old papers, seen by the Sunday People, state: “Some of the photographs in the defendant’s possession were taken with hidden cameras set up in [Epstein’s] home in Palm Beach.

“On the Day of his arrest, police found two hidden cameras and photographs of ­underage girls on a computer in the defendant’s home.

“[He] may have taken lewd ­photographs of Jane Doe 102 with his hidden cameras and transported [them] to his other residences and elsewhere.”

Court papers also allege that Maxwell presented nude pictures of her she had taken herself to Epstein as a birthday present.

They add that Roberts’ claims that she was forced to tell Epstein all about her sexual encounters so he could use the information to “blackmail” the royal.

She further claims she was sex-trafficked to “many other powerful men, including numerous prominent American politicians, powerful business executives, foreign presidents, a well known Prime Minister, and other world leaders”.


And now let's play our game: Who was that Prime Minister?

To-neeeeee...! If that's you, you're gonna have to say so many rosaries that even the Virgin Mary will get sick of hearing your voice.

This scandal places our right-wing media in a bind. Obviously, the right-wingers will want to leap on anything that dirties the Clinton name. On the other hand, anything that reeks of Mossad involvement is untouchable.