Bloggers are, I think, a little reluctant to write much now, because we're all waiting for the bad news out of Ferguson. Sure, people are talking about Obama's new actions on immigration, but that issue never excited me. One part that bothers me is this:


And Obama will expand the total number of high-tech visas that are available, as well as loosen restrictions so that more would-be entrepreneurs can travel legally to the United States to launch companies.

I am nevertheless quite amused by the Republican reaction, what with Ted Cruz comparing Obama's actions to the Cataline conspiracy to overthrow the Republic of Rome. I really enjoy it when conservatives brag about how they've gone to skul to get all ejikated and stuff. Cruz' complaint would carry more weight if he did not belong to the party of "We're an empire now."

Although the news remains in a holding pattern, there are still a couple of matters we should talk about.

Prohibited airspace. I happened to have a look at Wikipedia's article on restricted and prohibited airspace, taking a special interest in the section on the United States. There are ten permanent prohibited areas in US listed. Most of them are places you would expect to be on the list: Area 51 and environs (known as "The Box" to military pilots); Camp David, the White House and the Capitol; the Kennedy Space Center; Mount Vernon, facilities having to do with nukes, and so forth. 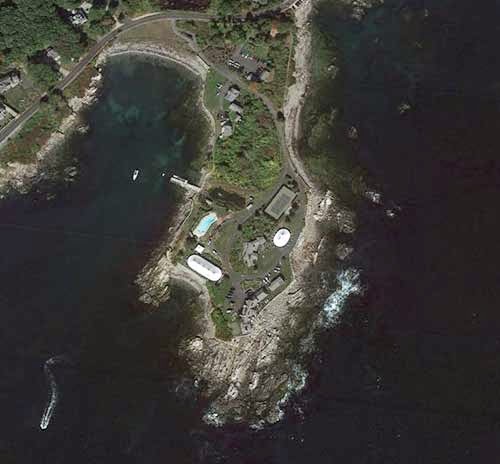 But one listing seems very strange: The Bush compound near Kennebunkport, Maine.

Why does the Bush family rate this kind of protection? Carter doesn't get prohibited airspace. Neither does Clinton. I don't think that Reagan had a no-fly zone over his home in Bel-Air. (Way too much air traffic in L.A.)

(By the way, roughly half a mile away from Stately Bush Mansion is a place called Bumpkin Island. I think that this would be an excellent location for Dubya to create a compound of his own.)

There's another odd item on the no-fly list: The Boundary Waters Canoe Area Wilderness in Minnesota, near Lake Superior. It's a place beloved by hikers, fisher-folk and canoe enthusiasts. But why a no-fly zone here, as opposed to any number of other wilderness areas?

I haven't found even the slightest hint of a secret military base in the area.

Max Blumenthal on Ukraine. First, you should understand that I am not an uncritical Blumenthal fan: He's pretty bad on Syria, believe it or not. We can get into that issue at another time. Right now, I strongly recommend that you read this.


AlterNet has learned that an amendment to the 2015 National Defense Authorization Act (NDAA) that would have forbidden US assistance, training and weapons to neo-Nazis and other extremists in Ukraine was kept out of the final bill by the Republican-led House Rules Committee.

Basically, this bill would have forbidden any aid to militaristic assholes who wear swastikas and other nazified couture. Guess who made sure that this thing got knocked down?

The Weisenthal center and the ADL!


An ADL lobbyist insisted that “the focus should be on Russia,” while the Wiesenthal Center pointed to meetings between far-right political leaders in Ukraine and the Israeli embassy as evidence that groups like Svoboda and Right Sector had shed their extremism.

No, they have not.

What has happened is that, in very recent times, a large section of the neo-fascist right in Europe has decided that Jews are okay after all. They've shifted targets: They now hate Muslims. And Slavs.

We learned all about this strange development from Anders Brevik, the Norwegian mass murderer who admires Israel and who had a presence on websites run by pro-Israel Islamophobes. Guys like Brevik (and Right Sector) are still extremists, even if they say they're fine with Jews.

Mind you, this shift is pretty recent. As Blumenthal notes, the creeps in Ukraine were singing the old song just a few years ago:


Svobodoa’s leader, Oleh Tyahnybok, once called for the liberation of his country from the “Muscovite-Jewish mafia.” In 2010, following the conviction of the Nazi death camp guard John Demjanjuk for his supporting role in the death of nearly 30,000 people at the Sobibor camp, Tyahnybok flew to Germany to praise him as a hero who was “fighting for truth.”


Since the Euromaidan revolution, however, Svoboda has fought to rehabilitate its image. This has meant meeting with Israeli Ambassador to Ukraine Reuven Din El and appealing to shared national values. “I would like to ask Israelis to also respect our patriotic feelings,” Tyahnybok has remarked. “Probably each party in the [Israeli] Knesset is nationalist. With God’s help, let it be this way for us too.”

Ukraine's ruling People's Front party has some interesting characters skulking about in it. There's a guy named Andriy Biletsky, for example. He leads the Azov militia, which is fighting against the people in eastern Ukraine who want no part of Kiev's current madness.

“The historic mission of our nation in this critical moment is to lead the White Races of the world in a final crusade for their survival,” Biletsky recently wrote. “A crusade against the Semite-led Untermenschen.”

Azov fighters are united by their nostalgia for Nazi Germany and embrace of open fascism. Sporting swastika tattoos, the battalion “flies a neo-Nazi symbol resembling a Swastika as its flag,” the New York Times’ Andrew Kramer recently reported.

To today's ADL, that's not a problem. They're open-minded. Swastika Schmastika.

On the other hand, if you're a low-level blogger who favors a one-state solution in Israel and who thinks that Palestinians should have full citizenship rights in that state -- God help you. These days, I'm considered an extremist. Not Biletsky. Me.
posted: 9:15 AM