Just yesterday, David Cameron of the UK did something that made ISIS stronger.

Let me explain. First, we need some background...

Radicalized young Muslims from all over the world have joined ISIS and the Nusra Front in order to overthrow the governments of Syria and Iraq. A lot of these young fools have lived for many years in Europe and the United States; some had never even set foot in Iraq or Syria. Nevertheless, they now feel that they have the right to go back to their "home" and take over the place. They also feel that they have the right kill Syrian and Iraqi families who have lived in that land for hundreds, thousands of years -- if those families subscribe to the "wrong" form of Islam, or, worse, are not Muslims at all.

Know this: We let this happen.

Our NSA knew full well that a bunch of extremist, violent jackasses who should have been heading up the "no fly" lists hopped onto airliners and zoomed off to the war zone.

(Where did they get the money for travel? Damned good question!) 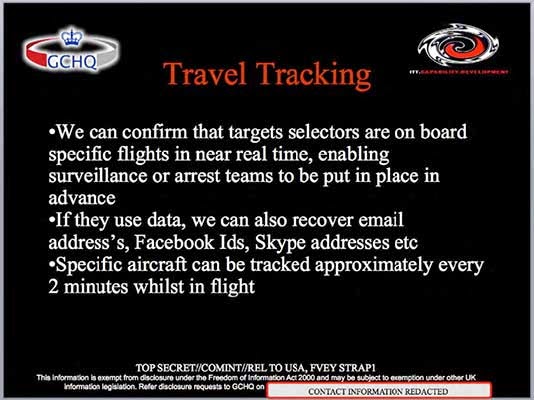 How do we know that the NSA knew? The methodology is called "Travel Tracking." The NSA -- and Britain's GCHQ -- are very good at it. I've written about this matter before.

The image to your left is one of those NSA powerpoint slides helpfully provided to us through the good offices of Mr. Snowden. It proves what I'm saying. If the spooks say that they didn't have the technology to track these jihadis, they're lying.

By the way, do you see that GCHQ logo at the top of the image? Good. I just wanted to make sure that you saw it.

So let's be clear: If a bunch of disaffected, jihad-crazed young maniacs from the UK left home to kick ass in "the Levant," they did so with the full knowledge and approval of the folks who live at 1600 Pennsylvania Avenue and 10 Downing Street.

So what did Cameron do yesterday that made ISIS stronger? This:


David Cameron announced new anti-terror powers during a speech to the Australian parliament.

British jihadists who travel abroad to fight could be prevented from returning under new powers outlined by the PM.

Under the Temporary Exclusion Orders, British citizens suspected of fighting with Islamic State (IS) militants would be stopped from re-entering the UK unless they gave themselves up at the border.

Suspects would have their passport cancelled and their name would be added to a "no-fly list" that would prevent them travelling to Britain.

They would only be allowed to return if they agreed to be escorted by the police before facing either prosecution or close supervision under monitoring powers.


In other words, Cameron's message to the jihadis is this: "We helped you guys go to Syria and fight against Assad. You're going to stay there and finish the job. We're not going to let you just walk away from the battle. If you want to come back to the UK, you'll have to do time in jail. Stay and fight."

That's pretty much it, isn't it?

Logic tells you that if "our" side really wanted to dismantle the fighting capability of ISIS, we would be making it easier for the fighters to chuck it all and study war no more. Instead, we made it easy for these young, easily-gulled fools to go to war -- hell, I wouldn't be surprised if "our" spooks paid for the plane tickets! -- and now it's impossible for them to leave.

Genius move, David Cameron. You've given us yet more reason to believe that ISIS was intended from the beginning to be nothing more than our proxy army.
posted: 3:30 AM