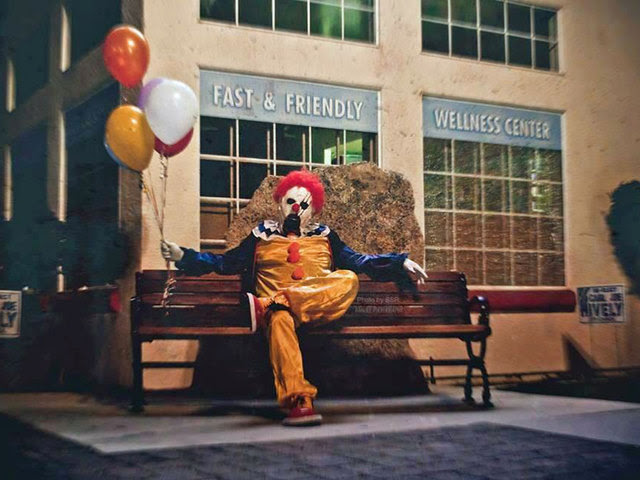 A rash of evil clown sightings in southern California has led to copycat clownage in other cities.

It all began in the small town of Wasco, near Bakersfield, where the fellow to your left showed up to terrorize the upstanding citizenry. Some say that his clowning is part of an ongoing art project. He even has his own Twitter feed -- which is not to be confused with the Twitter feed of Creepy the Clown, an unfriendly rival who haunts nearby Bakersfield.

The copycat clowns have allegedly been seen wielding machetes and baseball bats and even guns.


One child says he was chased down the street with an ax, KGET reports.

A deputy with the Kern County Sheriff's Office told the station that there have been reports of crimes committed in the neighborhood by people in clown costumes.

We should probably discount all reports of weaponized clowns. If you decided to pull a stunt like this, would you give the cops an excuse to haul you into the pokey? I wouldn't. I would be a scrupulously law-abiding clown who just happened to look evil.

(Is a scary clown allowed to carry a folding knife? California's knife laws are notoriously vague. By contrast, under Maryland law, an evil clowns may have a concealed "pen knife" of any size. If you are intent on being an evil clown, do it in Maryland.)

One copycat clown was arrested for "annoying a minor." Why don't cops arrest the many minors who annoy me?

Evil clown reports are not new. Loren Coleman's 1983 classic Mysterious America contains a chapter on Phantom Clowns. As Coleman documents, in the summer of 1981, a flurry of news reports in several states warned of enigmatic, frightening clowns who tried to lure children into their vans.

(Would that trick ever work? Seriously, has any pedo in history ever had any luck with that tactic?)

The tale of Tuppy. At this point, it may be appropriate to mention my personal run-ins with an unnerving clown. This story takes us back to 1980, the year before the sightings chronicled by Loren Coleman. I was in college when I met Tuppy.

Tuppy favored a brown costume. (Considering his line of work, he was pretty drab.) I wouldn't call him evil-looking; he was more of a sad clown, in the style of Emmett Kelly. During that summer, my friends and I frequently encountered him as we made the rounds of our usual haunts -- UCLA, Westwood, Santa Monica and environs. On occasion, he would talk with us, making unfathomable references to sick and dying children. He spoke in a strange mumble. He never asked for money.

Although we often saw him wandering the streets and always greeted him cheerfully, Tuppy creeped us out. That creature was an omen in greasepaint: Whenever Tuppy flippity-flopped into our presence, we knew that at least one of us would suffer a hideous and immeasurably profound reversal of fortune. For example, one of us might ask a girl on a date and she would say no.

Over time, even worse things started to happen.

As that hellish summer progressed, we all became genuinely freaked out by the conjunction of bad luck and the appearances of His Tuppiness. Bad things happened every single time we laid eyes on him, and I became convinced that Tuppy was somehow responsible for the increasing number of misfortunes in our lives. (Yes, I was guilty of post hoc ergo propter hoc reasoning -- but in my defense, we're talking about one hell of a lot of hoc.)

One night, I was part of a crew on a student film. The location was a working-class home on the edge of an industrial area, roughly forty miles away from our usual stomping grounds. We wrapped after midnight and packed up the car. I'll never forget the sight of the lone figure who came walking down that dark, shadowy street: Tuppy.

When we asked him why he was there, he gave no comprehensible reply. He simply sputtered something about sick and dying children.

As we drove off, I told my friends that what we all knew. "None of the footage is going to come out. Right?"

So it was written; so it was done.

The next time we saw the Clown of Doom -- near the Santa Monica Cafe, if memory serves -- was the day before I learned that my mother had lung cancer.

Tuppy's charm had definitely worn thin. Fortunately, that was the last sighting.

More clowns. Loren Coleman, a braver man than I, has continued to track the comings and goings of sinister circus folk.  Here are some reports coming out of Chicago in 2008.


In the October 2008 incidents, a man wearing clown make-up and a wig is using balloons in an attempt to lure children into his vehicle on the South Side of Chicago, Illinois. Police issued an alert about a week after a man with a similar description was spotted on the West Side.

The man, who wears clown make-up and a wig, approached children with balloons attempting to lure them into his vehicle, but the children ran and called 911, the alert said.

The man, who wears a clown mask or white face paint with teardrops on the cheek, has approached children walking to and from school, police said. Witnesses told police he was seen driving a white or brown van with the windows broken out.

Police on Sunday morning, October 12th, said the sightings have not been concentrated to one specific area and there have been multiple sightings of clowns across the city, according to a Harrison Area Special Victims Unit detective.


Seriously, you'd think that a pedophile would use any other approach. 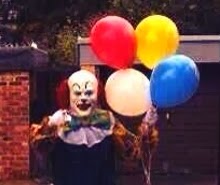 There were quite a few Evil Clown sightings in 2013, as far away as Northampton in the UK, Volendam in the Netherlands, and the island of Crete. Meanwhile, here in the states:


In late April of 1981, Daniel O'Connell of the Boston Public Schools sent the following memo to principals of elementary and middle schools in the city:


It has been brought to the attention of the police department and the district office that adults dressed as clowns have been bothering children to and from school. Please advise all students that they must stay away from strangers, especially ones dressed as clowns.

This sounds like a bad joke, but the memo was based on multiple reports of clowns harassing small children in the Boston area. A clown had tried to lure children into his black van near Franklin Park and the Mary Curley school in Jamaica Plain, and two clowns in a black van had offered Brookline children candy if they would join them for a quick ride.

Boys in the hoods. Some of you may have heard of a similar phenomenon involving roadside interactions with people in dark hoods. Not long ago, while perusing the wares at one of Baltimore's finer thrift stores, I happened across a scholarly volume titled Files From the Edge, by one Philip J. Imbrogno. From page 110:


In the summer of 2002, a young woman left her friend's house at 11 PM in North Salem, New York, and began her drive home to Brewster. She decided to take the back roads and drive around the reservoir; it was very beautiful that time of year. As her car turned down the Lower Magnetic Mine Road, she saw a figure standing in the road up ahead. At first she thought it was a deer, but when she flashed her bright lights she could clearly make out the outline of a person. The figure started walking toward the car and it was apparent this mysterious apparition wanted to get her attention. She stopped the car, rolled down the window, and yelled, "Are you OK?" Without warning, her car was swarmed by "at least fifteen men and women" in long red robes who pounded on her car hood and started shaking the vehicle. The woman screamed when one of them opened the driver's door and tried to pull her out of the car." 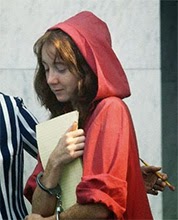 You'll have to buy the book to find out the rest of the story. (Ain't I a stinker?) Imbrogno reports that "people in hoods" accounts have a long history in this area; the earliest report goes back to 1910.

The hooded "Tau" robe is, of course, the traditional costume worn by practitioners of ceremonial magic. These robes are usually black, not red, although Squeaky Fromme and her associates once favored the "Wendy the Witch" look.

So, what do we make of these sightings? Perhaps the greasepainted enigmas in Wasco and other California towns are readers of Loren Coleman's book who have decided to maintain the tradition of Evil Clown apparitions. Something similar can be said of the roadside-attackers-in-hoods tales: I suspect that enterprising pranksters have decided to "live the lore" by dressing up as locally famous bogeymen.

The "street theater" theory explains both the Brewster magi and the Wasco clown, along with his Bozo-ized brethren.

But it doesn't explain Tuppy. Tuppy was a demon.
posted: 7:47 PM