Heretofore, I've not paid much attention to the stories about the Secret Service's strange lapses, but this brouhaha can no longer be ignored. Secret Service Director Julia Pierson, the first woman to hold that post, has resigned. Some commentators are making the sexist argument that she attained that position not because she had the proper qualifications but because the political "optics" were right. As you may recall, the Secret Service's reputation had been tarnished by a sexual scandal.

The most astounding recent incident was, of course, that epic intrusion into the White House, accomplished by one Omar Gonzalez. What a name! Omar Gonzalez. It's as though a group of "wag the dog" schemers sat around a conference table and came up with a monicker designed to make every right-wing crackpot in the country go apeshit. (I suppose "Mustafa Rodriguez" would have worked even better, but that's harder to spell.)


The furor stemmed from revelations that an intruder, identified as Omar Gonzalez, a 42-year-old Army veteran, managed to get deep inside the White House after scaling the fence on the north side of the building on Sept. 19 shortly after Obama had taken off in a helicopter.

While the service initially said Gonzalez was unarmed and was apprehended after entering the doors of the North Portico, court documents showed he had a folding knife in his pocket and Pierson acknowledged at a congressional hearing yesterday that he was able to cross two large halls and get across the East Room before being apprehended.

In court today, Gonzalez pleaded not guilty to federal charges of illegal entry to a restricted area while carrying a dangerous weapon.


The key point here: The initial reports coming out of the White House were deceptive. Why?

I still don't understand how a thing like this could have happened. I've walked all around the exterior of the White House grounds -- outside the fence, obviously. I've made this peregrination both during they day and late at night. I can assure you that the president's guardians watch everyone like a hawk. Last time I was in DC, they wouldn't let me photograph the White House using a camera with a tripod, even though I stood a good distance away from the building. 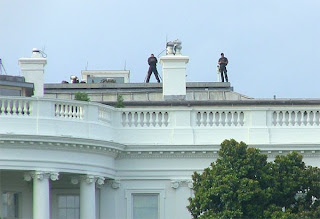 Nowadays, there are scary-looking dudes on the roof of the building at all times. I'm not sure what kind of equipment they are using in the photo to your right, but it looks expensive and intimidating. Why didn't those guys spot the intruder?

After we learned about Omar's odyssey, we got the news about President's infamous elevator ride.

While visiting the Center for Disease Control, Obama shared an elevator with a gun-toting "private security contractor" who happened to have a significant criminal record. This was a huge breach: If you're "carrying," you are not allowed to get close to the president unless you are a sworn law-enforcement officer.

This "private security contractor" has not been identified by name yet. Interestingly, he filmed the president in the elevator and continued to do so even after the Secret Service told him to stop.

Not only that. This fellow supposedly had three prior convictions for assault and battery. That's worrisome for reasons that have nothing to do with the President. We're talking about the CDC here, folks -- the place where they keep all sorts of really nasty virii and germs and whatnot.

California's infamous "three strikes" law put people behind bars for life for committing three acts of minor theft. It seems odd that someone with three convictions for assault and battery could get work at any security firm -- never mind a firm hired to protect the world's most dangerous biological materials. Someone with malign intent could do a lot of damage in a place like that.

The CDC's website gives one the impression that they run a very tight ship:


When you enter the CDC campus, veer right to proceed to the security checkpoint. Identify yourself as a visitor to the David J. Sencer CDC Museum. Security officers will ask to see your picture ID (driver’s license or passport) and will do a quick scan of the undercarriage of your car, van, or bus. Security officers will then ask you to open both the trunk and the hood of your car for inspection. You will then be directed to the visitor parking deck (straight ahead). When you walk into the Tom Harkin Global Communications Center from the parking deck (ground level), you are entering the David J. Sencer CDC Museum lobby. Once inside, you will be asked to show your picture ID again. Security officers will have badges waiting for large groups. For smaller groups (who did not schedule a tour) or individuals, security officers will create a security badge that will give you access to the museum.

This process will take at least 15 minutes.

Yow. Even I might not be able to get into the place -- and my record is clean!

Nevertheless, a couple of years ago, there was a quickly-forgotten mini-scandal involving security at the CDC's bio-terror labs:


A federal bioterror laboratory already under investigation by Congress for safety issues has had repeated incidents of security doors left unlocked to an area where experiments occur with dangerous germs, according to internal agency e-mails obtained by USA TODAY. In one incident, an unauthorized employee was discovered inside a restricted area.

Wouldn't it be cool if that guy were the same guy who took an elevator ride with Obama?

Yeah, I know: Ridiculous. But scenarios of this sort keep popping into my head. You can take the blogger out of Hollywood, but you can't take Hollywood out of the blogger.

Let's return to our main point: A guy with one conviction on his record can't even get a license to cut hair in New York state -- yet it seems that someone with three convictions in his background was allowed to work security in a facility filled with hideous bio-weapons. Does that situation make sense to you?

At this point, you're probably asking the same question I'm asking: Just which private security firm landed this CDC gig? This pdf describes the duties of the Office of Security and Emergency Preparedness. It confirms that the Office does use private guards, but does not name the company. If anyone out there knows the name, please share with the rest of the class.

(I spent about ten minutes trying to discover the name via Google. It belatedly occurred to me that my search may have triggered alarm bells somewhere in Fort Meade...)

A final thought. If you are of a sufficiently paranoid turn of mind, you are probably asking yourself: Is someone trying to send a message to Barack Obama? "Your personal protection is more easily compromised than you know, Mr. President. Be warned."

Am I letting my "Hollywood" side show again? Or is that a legitimate concern?
posted: 5:58 AM