David Stockman is worth listening to as long as he's not talking about economics, which is supposed to be his area of expertise. The opening to his piece on ISIS makes him sound more like a Noam Chomskyite than a Reagan Republican:


US imperialism was once a fearsome force—-mainly for ill. Under the latter heading, Washington’s savage destruction of Vietnam four decades ago comes readily to mind.

I wish that Stockman had possessed the courage to say such a thing when his old boss -- the one with the initials R.R. -- was trying to convince the public that Vietnam was a "noble cause." But that's history. Let's talk ISIS:


This is an utterly misbegotten war against an enemy that has more urgent targets than America, but a war which will nonetheless fire-up the already boiling cauldron of Middle Eastern tribal, religious and political conflict like never before. There is no name for what Obama is attempting except utter folly.

Stockman notes that Turkey shares a border with ISIS territory, yet does not feel nearly as threatened by the jihadis as we do. (Stockman does not mention that Turkey has funded ISIS.)


But Turkey didn’t even sign the communique; won’t deploy its military against ISIS—despite its adjacency and capability to demolish the ISIS capital in short order; and won’t even permit US bombers to operate against ISIS out of the Incirlik air base–notwithstanding that 60 years ago it was that very facility which allowed Turkey to avoid Stalin’s clutches.

Instead, it seems that the Islamist Sunni regime in Ankara has more urgent fish to fry than the medievalist Sunni sect encamped on its border: Namely, its far higher priority is deposing the secularist Alawite branch of the Shiite tribe represented by the Assad regime in Damascus...

The Iranians have good reason to take action against ISIS, which has been slaughtering Shiites. Alas, any American alliance with Iran is off the table. [Or is it? See "This just in," at the bottom of this post.] We formed a temporary alliance with Stalin, we supported Pol Pot at the U.N., and we propped up all sorts of dictators from Marcos to Pinochet. But we can't work with Iran against ISIS.


In fact, Iran is the indispensable ally if Washington really means to takes sides in this latest eruption of an age-old Sunni vs. Shiite religious war that has virtually nothing to do with America’s legitimate security interests. But two decades of neocon and Israeli propaganda have deposited a thick vapor of lies throughout the entire beltway—spurious claims that Iran is an aggressive, terrorist nation hell-bent on getting nukes, and that, therefore, it cannot be consorted with under any circumstance.

So the irony of the neocon demonization of Iran is that the one real political and military barrier to the expansionist ambitions of the Islamic State—the so-called “Shiite Crescent” of Iran, the Assad regime in Syria and Hezbollah—is not even admitted onto the battlefield.

The only fighters we can depend upon are -- as always -- the Kurds. Alas, the Turks consider the Kurds to be terrorists.

Even the "moderate" Free Syrian Army doesn't want to fight ISIS. Stockman proves the point with a quote from Representative Rick Nolan, as published a couple of days ago. Nolan's statement is given greater context here...


“Did you hear the latest news?” Nolan asked his colleagues. “Just came out over the wire, I bet you guys haven’t heard it. The founder of the Free Syrian Army, okay? The one we’re going to give five billion dollars to? Riad al-Assad? He just says, ‘We’re not going to use that money to fight ISIS. No, no, we’re fighting Assad!’”

On Wednesday, as the House prepared to vote on aid to the Free Syrian Army, saying that many Members of Congress had asked him about this quote, Nolan wrote to his colleagues: “'The Free Syrian Army has announced that it will not sign up to the U.S.-led coalition to destroy the Islamic State (IS) militants in Iraq and Syria,’ the story read. 'The group’s founder, Colonel Riad al-Asaad, stressed that toppling Syrian President Bashar al-Assad is their priority, and that they will not join forces with US-led efforts without a guarantee that the US is committed to his overthrow.’"


But fielding a moderate rebel fighting force in Syria depends on eliminating the Assad regime first—-an obviously fraught undertaking. It would result in not simply a two front war—-with the Shiite Crescent and ISIS at the same time–but for all practical purposes a three front war, including Russia.

Perhaps the amateur warriors running the show in the Obama White House have not noticed, but their foolish campaign against Russia over the Ukrainian civil war is a direct threat to the only thing that keeps the Russian economy alive—its gas and oil exports to Europe. At the same time, elimination of the Assad regime would almost surely compound that threat by opening up a new gusher of competition for the European energy market in the form of a pipeline through Syria and Turkey for transport of Qatar’s now stranded but massive deposits of natural gas.

So to the nameless coalition of the willing, add an existentially motivated champion—-Russia—-of the status quo in Damascus. Indeed, were Obama to actually recognize that the route to regime change in Raqqah is through Damascus first, the resulting thunderous confrontation at the UN Security Council would be one for the ages. 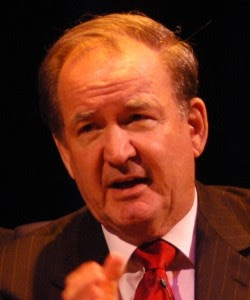 Speaking of strange bedfellows: It's Pat! I have never much cared for Pat Buchanan (to put the matter politely) but when it comes to this war, the man is right.


Why the hesitation? Because our strategy in Syria is to rely on a Free Syrian Army that has been the least effective force in that civil war, and untrustworthy to boot. Units of the FSA have handed their U.S. weapons over to ISIS. Yet these “feckless” rebels, says Sen. Bob Corker, constitute “our entire ground game.”

John McCain raises a second issue. The FSA came into being to overthrow Bashar Assad. Now they are to be retrained to fight ISIS. How effective will the FSA be when told to change sides and become de facto allies of the dictator against whom they took up arms?

The FSA won't switch targets, and I don't think that we will actually ask them to do so. As stated before, the war against ISIS masks the war against Assad. To quote the poet: One train may hide another.

An actual war against ISIS would be a truly "noble cause." But because we will not make the necessary alliances with Syria and Iran, our bombing campaign will devolve into pointless destruction, which can only increase Sunni fundamentalism.


Does the Journal have in mind another unconstitutional war?

So it would seem. For the Journal not only wants bombs falling on ISIS, but on Assad as well. ”Defeating the Islamic State will also require attacks on the Assad regime. Sunnis will not support the campaign against Islamic State if they think our air strikes are intended to help the regime in Damascus and its Shiite allies in Beirut and Tehran.”

The Journal wants Obama to bomb Raqqa, ISIS, the Assad regime, and its army and air force, to give the FSA a “psychological boost.” Questions arise: Does the Journal believe Barack Obama needs Congressional authorization before going to war against Syria, which has neither attacked nor threatened us, but instead has expressed a willingness to work with us to destroy ISIS?

Does the Journal believe Hezbollah and Iran, which have expended blood and treasure sustaining their ally Assad in his civil war, will sit still and watch us bomb him? Will Putin do nothing as we bomb his ally?

Before we went back into the Iraq war, we were told ISIS had 15,000 fighters. Now there are estimates of 30,000. Are we again creating more enemies than we are killing?

And if our bombing campaign against Assad breaks him, who comes to power in Damascus, if not ISIS, al-Nusra or the Islamic Front? What then becomes of the Christian and Shia minorities?

This is not an easy post to write. I have just quoted David Stockman and Pat Buchanan -- at length, and approvingly. My younger self would never have predicted this turn of events.

Worse -- and despite being a life-long Francophile -- I find myself increasingly furious at the socialist President of France, Francois Hollande. He has propagated the lie that Assad gassed his own people and he has spread the "Assad created ISIS" myth. On the question of peace and war, this "socialist" is nearly indistinguishable from Dick Cheney:


While most in the U.S. would consider a left-wing Socialist like Hollande unlikely to use military force, Hollande has proven himself to be quite the hawk, willing to deploy French forces to a number of combat zones. Last year, France volunteered to join any military campaign the U.S. was prepared to launch to punish Syrian president Bashar al-Assad for using chemical weapons against civilians...

But what's a librul peacenik to do? The war against war makes for strange bedfellows. And now, if you will excuse me, I have to make breakfast. In honor of Monsieur Hollande, we're serving Freedom Toast.

This just in: Talk about strange bedfellows! John Kerry now says that Iran has a role in the ISIS crisis.


Kerry’s statement marks a shift in tone on the U.S. position toward involvement by Iran, a Shiite-majority state, in a coordinated campaign against the radical Sunni insurgency. The U.S. had excluded Iran from a multinational Sept. 15 conference in Paris on countering the threat posed by Islamic State, which has seized a swath of Iraq and Syria.

Marie Harf, a State Department spokeswoman, said on Sept. 16 that “we’re open to talking to the Iranians about what’s happening in Iraq, but not coordinating with them, not sharing intelligence with them.”

Since Iran and the US are more or less on the same side when it comes to Iraq, the contentious issue -- as always -- is Syria. Iran could provide the ground troops we desperately need in Iraq, were it not for our mad insistence on bringing down Bashar Assad.

Let the implications of that sink in.

Most people understand that (despite Obama's protestations to the contrary) the fight against ISIS will probably require "boots on the ground." Those boots need not be filled by the feet of American and British soldiers. Iranians can do the job. They want to do the job. It's their part of the world; it's their fight. ISIS is making life miserable for a whole bunch of Shiites and Alawites, and the Iranians are their coreligionists. Yet Obama's government would rather sacrifice our boys, place American necks at risk of being sliced open by those ISIS monsters. Why? For one reason and one reason only: The neocons won't give up their mad dream of regime change in Syria.

Still, for Kerry to take even a half-step toward Iran is...well, it's something.
posted: 3:08 AM