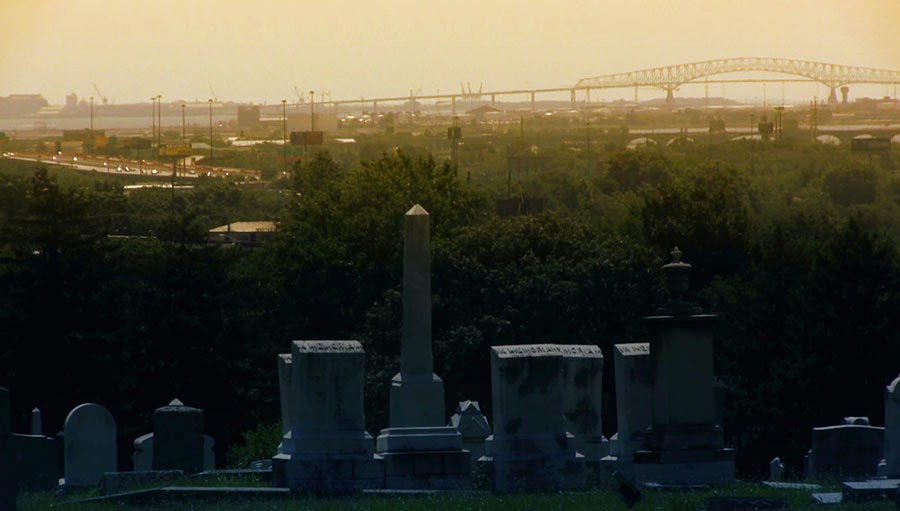 For the past year or so, I've been working on a film about the mysteries of Baltimore. The image above -- a frame capture from the opening shot -- may not seem terribly impressive at first, but it encodes a great deal of information about this city. Perhaps about the country.

Although you can't see Fort McHenry in this shot (it's off to the left), this image relates to the night "The Star Spangled Banner" was born. The bridge in the background is the magnificent Francis Scott Key Bridge, named after the famed lawyer who wrote our national anthem. Although no-one knows the exact location of the ship on which he stood as he watched those bombs bursting in air, the vessel probably rested in the waters just below the bridge.

Many people don't know that "The Star Spangled Banner" was not Key's sole literary production. He also wrote defenses of slavery.  Paradoxically, he opposed the slave trade and decried the conditions which most slaves had to endure. When Key was District Attorney of Baltimore, the city was considered a prime destination for freed black people, seven of whom had once belonged to Key himself, who nevertheless remained a staunch opponent of the abolitionist movement.

In 1814, an escaped slave named William Williams made his way to Fort McHenry and enrolled as a soldier. During the battle of Baltimore, a cannonball blew off Williams' leg; he died not long afterward. His owner sued to collect the acreage promised as a reward to all who signed up to fight in that war. The owner lost on the grounds that a slave cannot sign a valid contract -- which means that Williams himself probably would not have received any property, had he survived. 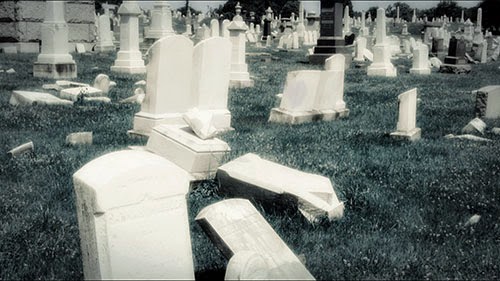 Although Baltimore contains many remarkable (and allegedly haunted) cemeteries, Mount Olivet may be the eeriest. Many headstones have dates going back to the 18th century, and many of those grave markers are partially or wholly toppled. Vandalism, we're told. I'm not so sure about that.

Many inhabitants of this city learn graveyard connoisseurship. Greenmount cemetery -- once the city's most fashionable boneyard -- is the final resting place for former CIA chief Allen Dulles (and his wife Clover, driven nearly mad by his serial infidelities). A little more than a hundred yards away from Dulles, one may find a small, unmarked headstone, beneath which lies whatever may be left of John Wilkes Booth. The few JFK assassination researchers who know about this juxtaposition consider it quite appropos.

Although civic boosters refer to Baltimore as Charm City, I think of it as Death City. This town's laws against homicide, like its laws against fireworks, are regarded as mere suggestions. The industrial base has melted away, the neighborhoods decompose right before your eyes, the local sports franchise faces a terrible scandal, and even the crabs are now imported. Death is the one thing this city still does well.

Look again at that opening shot. Behind the bridge, you'll see Sparrow's Point, once the proud home to this country's largest steel mill -- the "Beast of the East," owned by Bethlehem Steel. During World War II, many Liberty ships were built at Sparrow's Point. People were proud to work there, even though the conditions were harsh and dangerous. For a brief period, the mill was owned by controversial Indian steel magnate Lakshmi Mittal, who seems to have run the place into the ground.

The mill is silent now. So are most of the other factories in this town. Nature is reclaiming them. Even the land beneath those buildings goes unused. To me, the sight is bizarre: In California, many businesses close, but someone will always find a new purpose for the real estate. Things are different here.

The image at the top of this page also affords a glimpse of the Dundalk Marine Terminal, one of the largest cargo ports in the world. If you live on the east coast, the Chinese crap you buy at Wally World probably came through here.