Nick Gillespie, the proudly libertarian editor of Reason magazine, is also a writer for the Daily Beast -- because, you know, running your own damned magazine isn't enough exposure for someone who wants to foist Randroid propaganda on the public. Although he is white -- as I am -- he believes that he knows what the black people of Ferguson really, really want.

No need to ask them what they want. Ask Nick. Nick knows. Nick will answer on their behalf.

Nick thinks that these people are protesting because they long to bring about a Libertarian revolution. They've taken to the street because they hate Obamacare sooooo much. They are motivated by "a general lack of belief that spending more money is going to fix the country." They seek a "fiscally responsible" economic model.

Of course, by "fiscally responsible," Nick means deep-sixing all economic protections for the working class. He wants you to believe that the protestors seek a free-for-all, crush-the-weak Social Darwinist economic model.

His article comes with an illustration of three black men marching in Ferguson. Nick wants us to believe that these three men are thinking the following thoughts: 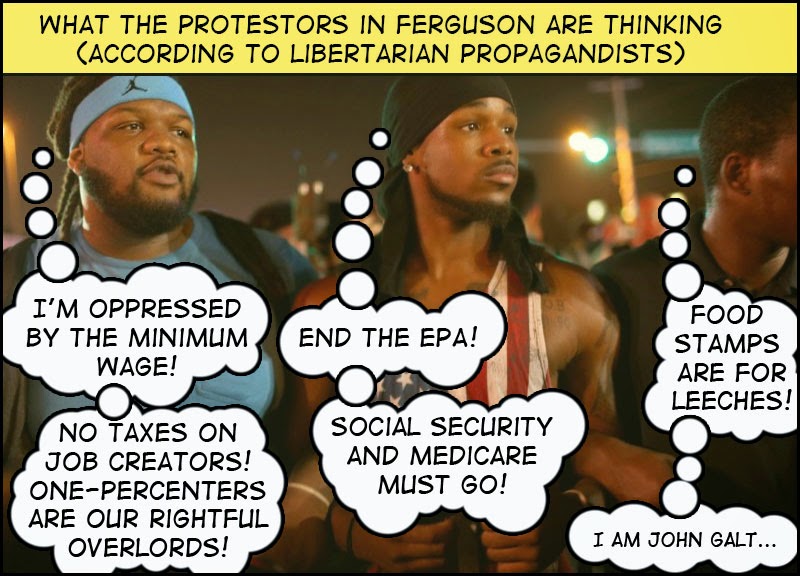 Now if you want to know what those three guys were really thinking as they marched down the street, you'll have to ask them. If you happen to be one of those guys, please write in.

That said, I have my own suspicions -- and they run counter to Nick's scenario. 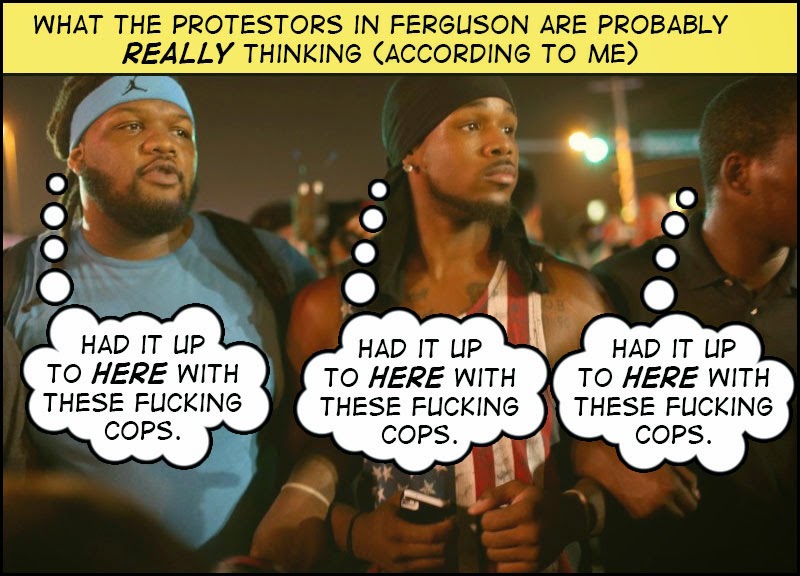 At this point you may be asking: What makes the Cannon version more accurate than the Nick Gillespie version?

Granted, I'm as white as Nick is. But I doubt that I'm as privileged as Nick is. I grew up poor, supported by a widowed mother who depended on Social Security and her late husband's veterans' benefits. My father (who got the Purple Heart in Korea) paid into the system and expected the system to take care of his kids if anything happened to him. In the 1960s, this presumption was considered perfectly honorable, reasonable and fair. True, there were years when I earned decent money and even attained a taste of the middle class lifestyle. But some time ago, mostly through my own foolishness, I slid into near-homelessness, and have remained in a precarious state for...well, for longer than I care to think about. Improving that situation is no snap -- not at my age.

Despite my pale skin, I've learned to be very wary of cops. That's a lesson most poor people learn, regardless of race -- although I have no doubt that those who are both poor and black have a harder time of it.

So I can't claim to speak for the protestors in Ferguson, because only they know what it's like to live there. Like Nick, I can only hazard a guess as to what those three guys were thinking as they marched together. But let me ask you: In your opinion, whose guess comes closest to the truth -- Nick's or mine?

Do the protestors truly want an end to what's left of the social safety net, as Nick seems to believe? Do they want poor people without insurance to die in the streets? Do they want employers in their area to be free to say "You'll work for a dollar an hour or you won't work at all?"

Or do the protestors simply want the cops not to act like assholes?

Bonus questions: Aren't asshole cops and a militarized police force the inevitable result of one-percenters seeking to protect their loot from the 99 percent? Aren't libertarians like Nick seeking to establish an out-and-out plutocracy? Doesn't history teach us that plutocrats never hesitate to use incredibly brutal methods to keep the peasants from rebelling? When the unruly mob starts to get out of line (or when a weaker foreign government won't give their resources to international conglomerates), won't the plutocrats suddenly decide to toss their anti-government rhetoric right out the window? Won't the rich learn to love government at that moment?

The problem is not government per se but which class that government answers to.
posted: 1:35 AM