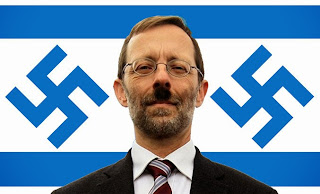 We must be grateful to Deputy Speaker of the Knesset Moshe Feiglin, because he says openly what other racist Israelis say in private. Here is his "peace" program:


Ultimatum – One warning from the Prime Minister of Israel to the enemy population, in which he announces that Israel is about to attack military targets in their area and urges those who are not involved and do not wish to be harmed to leave immediately. Sinai is not far from Gaza and they can leave. This will be the limit of Israel’s humanitarian efforts. Hamas may unconditionally surrender and prevent the attack.

Attack – Attack the entire ‘target bank’ throughout Gaza with the IDF’s maximum force (and not a tiny fraction of it) with all the conventional means at its disposal. All the military and infrastructural targets will be attacked with no consideration for ‘human shields’ or ‘environmental damage’. It is enough that we are hitting exact targets and that we gave them advance warning.

Siege – Parallel to the above, a total siege on Gaza. Nothing will enter the area. Israel, however, will allow exit from Gaza. (Civilians may go to Sinai, fighters may surrender to IDF forces).

Defense – Any place from which Israel or Israel’s forces were attacked will be immediately attacked with full force and no consideration for ‘human shields’ or ‘environmental damage’.

Conquer – After the IDF completes the "softening" of the targets with its fire-power, the IDF will conquer the entire Gaza, using all the means necessary to minimize any harm to our soldiers, with no other considerations.

Elimination- The GSS and IDF will thoroughly eliminate all armed enemies from Gaza. The enemy population that is innocent of wrong-doing and separated itself from the armed terrorists will be treated in accordance with international law and will be allowed to leave. Israel will generously aid those who wish to leave.

Sovereignty – Gaza is part of our Land and we will remain there forever. Liberation of parts of our land forever is the only thing that justifies endangering our soldiers in battle to capture land. Subsequent to the elimination of terror from Gaza, it will become part of sovereign Israel and will be populated by Jews. This will also serve to ease the housing crisis in Israel. The coastal train line will be extended, as soon as possible, to reach the entire length of Gaza.


When will Americans wake up? Racist Israelis are engaged in a long-term program of land-theft and genocide.

Don't get me wrong: I like Feiglin. Other racist Israeli politicians and pundits cannot be trusted to tell the truth when speaking in mixed company. If you want a more accurate view of the dark racist heart of racist Israel, listen to Feiglin.

I have far more respect for him than I have for the subtly deceiving -- self-deceiving? -- Amos Oz. In a much-ballyhooed interview, Oz makes me want to puke, especially when he lays on the usual disgusting argument that the Holocaust justifies the theft of Palestinian land. (The interview comes from 2004, but for some reason, a lot of people have decided to pay attention to it now.) Oz says that the current war is "justified but excessive." I imagine that there were people who said similar things about Operation Barbarossa.

No, give me Feiglin. Give me someone who says what racist Israelis really think.
posted: 2:36 PM