For a while now, I have more-or-less accepted the view that the MH17 disaster occurred when Russian-speaking separatists -- using a BUK anti-aircraft system "liberated" from Ukrainian military stores (one article even pinpointed the exact weapons cache) -- fired a missile at what they presumed to be military craft. I have doubted the separatist claims that they never possessed such a weapon, and I had even stronger doubts about the mainstream media's absurd "Putin diddit" theory.

The "mistaken identity" scenario may still be the way to bet, but don't wager the rent money. Things may not be as we suppose. We turn, first, to Robert Parry. Of the shootdown theory, he says:


U.S. and Ukrainian government officials began pushing this narrative immediately after the plane went down on July 17 killing 298 people onboard. But the only evidence has been citations of “social media” and the snippet of an intercepted phone call containing possibly confused comments by Ukrainian rebels after the crash, suggesting that some rebels initially believed they had shot the plane down but later reversed that judgment.

A major problem with this evidence is that it assumes the rebels – or for that matter the Ukrainian armed forces – operate with precise command and control when the reality is that the soldiers on both sides are not very professional and function in even a deeper fog of war than might exist in other circumstances.

Parry then goes on to ask a couple of damned good questions. Why haven't the Americans provided satellite imagery (or other evidence) proving that the BUK anti-aircraft system came from the Russians?


The U.S. government’s case also must overcome public remarks by senior U.S. military personnel at variance with the Obama administration’s claims of certainty. For instance, the Washington Post’s Craig Whitlock reported last Saturday that Air Force Gen. Philip M. Breedlove, U.S. commander of NATO forces in Europe, said last month that “We have not seen any of the [Russian] air-defense vehicles across the border yet.”

It's striking that we've been given no conclusive evidence that a BUK missile was used at all. The U.S. should have have known all about such a launch immediately, because we've made it our business to know (in real time) about other missile launches in the area. See the discussion here.

And now we wade into even deeper waters...


There’s also the possibility that a Ukrainian government missile – either from its own Buk missile batteries fired from the ground or from a warplane in the sky – brought down the Malaysian plane. I was told by one source who had been briefed by U.S. intelligence analysts that some satellite images suggest that the missile battery was under the control of Ukrainian government troops but that the conclusion was not definitive.

Plus, there were reports from eyewitnesses in the area of the crash that at least one Ukrainian jet fighter closed on the civilian plane shortly before it went down. The Russian government also has cited radar data supposedly showing Ukrainian fighters in the vicinity.

If this post were a symphony, the preceding paragraphs would function as the first statement of our themes. On to the development section. 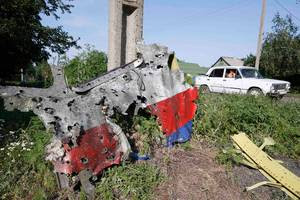 German aviation expert Peter Haisenko says that MH17 was shot down by air-to-air fire, not by a ground-based missile. Does Haisenko have an agenda or a bias? I don't know. But his words are worthy of consideration. He says that there are surprisingly few photos of the wreckage, but there is one image which seems to show evidence of "projectiles."

Judge for yourself; I reproduce the image to the left. Although I've never seen an aircraft that has been hit by bullets (or "projectiles"), I have seen a bullet-riddled car. (Your humble host has lived in some tough neighborhoods.) That looked like this.


The facts speak clear and loud and are beyond the realm of speculation: The cockpit shows traces of shelling! You can see the entry and exit holes. The edge of a portion of the holes is bent inwards. These are the smaller holes, round and clean, showing the entry points most likely that of a 30 millimeter caliber projectile. The edge of the other, the larger and slightly frayed exit holes showing shreds of metal pointing produced by the same caliber projectiles...

The question is simple. Did these "wounds" result from a surface-to-air missile or from an aerial attack?

This photo shows a section of the craft free of "projectile" holes.

Next question: Was there another aircraft in the area?


Russia recently published radar recordings, that confirm at least one Ukrainian SU 25 in close proximity to MH 017. This corresponds with the statement of the now missing Spanish controller ‘Carlos’ that has seen two Ukrainian fighter aircraft in the immediate vicinity of MH 017.

The "Carlos" story always seemed very iffy to me. Until he can be traced and interrogated, we're going to have to solve this one without reliance on him.

At any rate, the Organization for Security and Cooperation in Europe examined the wreckage and came that close to echoing Haisenko's take on the matter.


Monitors from the Organization for Security and Cooperation in Europe reported that shrapnel-like holes were found in two separate pieces of the fuselage of the ill-fated Malaysia Airlines aircraft that was believed to have been downed by a missile in eastern Ukraine.

Michael Bociurkiw of the OSCE group of monitors at his daily briefing described part of the plane’s fuselage dotted with “shrapnel-like, almost machine gun-like holes.” He said the damage was inspected by Malaysian aviation-security officials.

(The quote comes from here but was originally published here, behind a paywall.)

A BBC News report featured eyewitnesses to an air-to-air attack on MH17. Strangely enough, the BBC censored this report without offering any factual counter-argument. I've embedded that censored video above.

Here's a transcript of the eyewitness testimony:


Eyewitness #1: There were two explosions in the air. And this is how it broke apart. And [the fragments] blew apart like this, to the sides. And when …

Eyewitness #2: And there was another aircraft, a military one, beside it. Everybody saw it.

Eyewitness #1: Yes, yes. It was flying under it, because it could be seen. It was proceeding underneath, below the civilian one.

Eyewitness #3: There were sounds of an explosion. But they were in the sky. They came from the sky. Then this plane made a sharp turn-around like this. It changed its trajectory and headed in that direction [indicating the direction with her hands].


A disconcertingly large number of news articles indicate that MH17 was deliberately diverted over a war zone. One such article appeared in the Daily Mail...


The pilot of MH17 radioed that he 'felt uncomfortable' about the route he was flying while over Ukraine and fatally altered his course to hostile territory, according to an expert.

The accompanying visual aide is quite striking. Tyler Durden asks the pertinent questions...


So perhaps before coming to "certain" conclusion about the involvement of this rebel or that, the key questions one should ask before casting blame, is why did the pilot divert from his usual flight plan, why did he fly above restricted airspace, and just what, if any instructions, did Kiev air control give the pilot in the minutes before the tragic explosion?

This takes us back into "Carlos" territory. Alas, I have yet to see evidence that "Carlos" was or is a real person.

Now Russia is accusing the Kiev government of trying to destroy the evidence. Putin has called for a ceasefire, but the Ukrainians feel that they now have the advantage.

A writer named Finian Cunnigham claims that there is an effort to block an investigation:


Tellingly, before any probe has got under way the US and its European allies have whipped up a media frenzy to finger Russia over the airliner disaster. No evidence has been provided to support these reckless, premature claims. Indeed, some of the so-called US evidence of alleged militia phone intercepts and videos of missile launchers have been shown to be fake.

At times, Washington has even contradicted itself, claiming on some occasions that it is confident Russia is linked to the crash, while at other times saying it does not know. This vacuity has not stopped Washington and its European allies piling on accusations against Russia and moving this week to ratchet up economic sanctions on Moscow.


With the MH17 crash, we were struck by the certainty with which U.S. and Western officials affixed blame, insisted that the plane had been brought down by a missile, and, moreover, asserted which “side” had fired it. Contrast that with TWA Flight 800 in 1996, where eyewitnesses stated they saw a projectile heading toward the plane before it exploded over Long Island. In that case, the government and media rushed to divert the public away from such cl aims—one of which implicated a U.S. Navy missile test gone awry.

And then we come to the strange business of the black boxes.

Many American media outlets are reporting that data from a recovered black box proves that the jet was shot down by a ground-to-air missile; see, for example, here. However, the Wall Street Journal -- which broke the "shrapnel" story -- says that the black boxes were "older models" which can provide only a sketchy picture.

Frustratingly, and somewhat astoundingly, there seem to be multiple sets of black boxes: One was in the hands of the separatists and sent on to Moscow, while the other is controlled by Kiev! (The first link goes to a video which purports to show the very moment of the black box discovery.)

Many of the questions raised by the above-linked articles strike me as legitimate. Are they answerable? Quite possibly. Has the public been inundated with truly goofy theories? You betcha. Always remember that neither Washington nor Moscow nor Kiev can provide truly disinterested information. I still favor the "accident" theory, although I'm not nearly so confident about it as I once was.

I don't know anything about the fellow who put together the well-produced video embedded below, but it is worth watching. This short film asks some of the right questions, and does an excellent job of outlining the political background -- including the censored truth about the Odessa massacre. Alas, we really didn't need to go traipsing through the "Northwoods" yet again. (Operation Northwoods has become something of an all-purpose "conspiracy cliche" in recent years, yet the true genesis of the plan remains little understood. I'll have to write about it one of these days.)