The summer 2014 issue of Lobster (Robin Ramsay's quirky-but-essential parapolitical periodical) is so fascinating that I could spend the next week analyzing (or swiping) its contents. For now, I want to draw your attention to one story in particular -- a story which looks into a question that many people have asked over the years:

Do presidents and other world leaders have doubles -- or "political decoys," to use Wikipedia's preferred term?

This oft-heard claim inspired Dave, an excellent comedy starring Kevin Kline. Even some people who have an allergic reaction to conspiracy theories will concede that doubles are occasionally employed.

Hitler certainly had doubles -- in fact, we even know the name of one of the pseudo-Hitlers: Gustav Weler. During WWII, General Montgomery ("Monty") is said to have used the services of a double named M.E. Clifton James. Not long ago, the Russian government officially acknowledged that a man named Felix Dadaev doubled for Stalin on occasion.

(Stalin also had a lookalike who played him in films such as The Fall of Berlin. One of these days, I really should devote a post to that completely insane production.)

The above-mentioned Lobster story -- by one Garrick Alder (a name previously unfamiliar to me) -- draws from a couple of unfortunate sources. One is Nigel Turner's television series The Men Who Killed Kennedy, which I have always considered a very mixed bag. The other "iffy" source is Billy Sol Estes, a Texas con artist with many ties to Lyndon B. Johnson.

Late in life, Estes averred that LBJ was the mastermind of the plot against Kennedy. This is a scenario which I do not buy, for reasons outlined here.

Obviously, you should tread with care as you explore this territory. Nevertheless, I encourage you to check out Alder's tale.

He focuses on a man named Jay Bert Peck, a small-town sheriff who played LBJ in The Wrecking Crew, one of Dean Martin's "Matt Helm" spy movies.

(I'm old enough to have seen this one in theaters. All I can remember about the movie is that it insulted my intelligence, and I was just a small boy at the time. However, this film does offer a rare chance to see Sharon Tate on screen -- along with Tina Louise! Incidentally, the usually-reliable IMDB misidentifies Peck in its cast listing.) 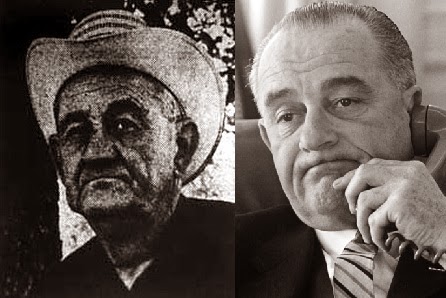 Peck -- seen here wearing a hat -- did indeed bear a strong resemblance to Johnson, whom he called his "cousin," even though there was no actual family relationship. One begins to wonder if anyone in Texas is capable of telling an unstretched truth.

The rumor is that Peck doubled for Johnson the night before the assassination of JFK. Peck was himself shot to death in June of 1969; his murderer was never identified.

Billy Sol Estes, the teller of so many a tall tale, said that the man who killed Peck was one John Liggett, who worked in a Dallas funeral home. Liggett's wife told investigators that her husband had altered JFK's corpse before the body was flown east. (Liggett specialized in making corpses look presentable for open casket ceremonies.)

Although you may be rolling your eyes at those claims, one aspect of this story is indisputable: In 1974, five years after the unsolved killing of Jay Bert Peck, Liggett was convicted of trying to murder Dorothy Peck, the wife of the man who stood in for LBJ. Liggett hit her in the head repeatedly with a hammer. Believing her to be dead, he then tried to cover his tracks by setting her home on fire. She survived this ordeal long enough to identify Liggett.

There's a lot more to this bizarre story -- including the allegation that JFK himself had a double in Dallas on the day of the assassination. That claim comes from Howard Brennan, the only Dealey Plaza witness to place Lee Harvey Oswald in the Texas Schoolbook Depository.

(Brennan's testimony on that score is pretty easy to impeach: He wasn't wearing his glasses.)

As noted above: Read this material with caution. But you gotta admit -- this stuff is fun.

If you can suggest a scenario which explains the deaths of both Peck and his wife, I am all attention.
posted: 1:49 AM