I pity youngsters. Who will tell them the real story of what their parents and grandparents did? We're losing our history, even the history that occurred within living memory, because the tales are being told in an utterly skewed fashion by people with axes to grind.

Case in point: Randall Balmer's recent piece in Poltico, in which he outlines what he considers the real origin of the religious right. His argument makes no sense.

Balmer pooh-poohs the contention that the religious right grew in opposition to the 1973 Roe-v-Wade ruling on abortion. He cites the commentary in mainstream religious publications of the time, which either cautiously approved that ruling or remained silent.

The real impetus, he argues, was school desegregation -- specifically, the court ruling which decreed that segregated schools could not receive tax exempt status.

Balmer gives us no evidence that this ruling had any connection whatsoever to the rapid growth of fundamentalism in the 1970s.

The religious right gained power through numbers, pure and simple. Mainstream denominations declined while membership swelled in churches offering a more primal type of Christianity. The successful churches were evangelical, pentecostal, highly emotional, non-rational, paranoid, reactionary, almost medieval in their theology and embrace of supernaturalism. In short: The rise of the religious right's political power grew out of the popularity of fundamentalism.

True, there were Baptist leaders who, as late as 1973, refused to attack Roe-v-Wade. These people were still trying to play the mainstream game. When Baptists realized that this game was unwinnable, they switched to a more aggressive, more barbaric, more crowd-pleasing form of fundamentalism.

So why did fundamentalism rise in the 1970s? I blame hippies. (And if that sounds like something Sheldon Cooper would say, apologies.) 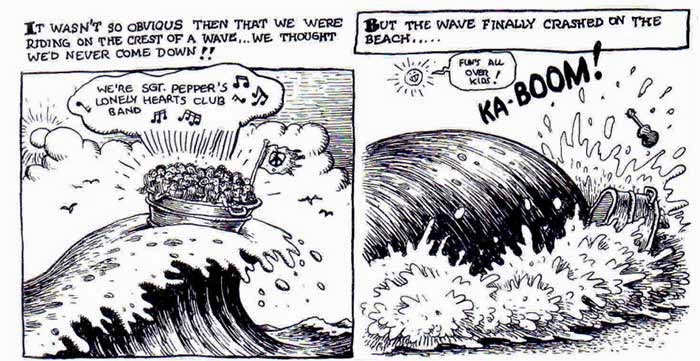 Fundamentalism was both an outgrowth of and a reaction to the hippie movement.

Outgrowth: The flower children disdained reason and plugged directly into the Id. So do the more primeval forms of religion.

Consider the lyrics to one of the best-known songs by the Beatles: "Turn off your mind, relax and float down stream/It is not dying, it is not dying/Lay down all thoughts, surrender to the void/It is shining, it is shining." It's easy to see the chain which links that sentiment to the teachings of Jerry Falwell and Pat Robertson -- although I'm sure that Paul and Ringo (and their many fans) would rather not acknowledge the connection. Fundamentalist preachers promised to turn off your mind. They assured you that you would not die. Many who attended evangelical services raised their palms to the heavens and entered a trance state -- in other words, they surrendered to the void.

The classic (male) hippie look -- long hair, beard, scruffy clothing -- was, in essence, the Jesus look. Cult leaders like Manson and Robert DeGrimston used that resemblance to their advantage. Even after the cults of the late 1960s were exposed as fraudulent and dangerous, the psychological needs that gave rise to those cults remained. The Jesus movement -- which began as a subculture within hippie-dom -- grew out of those needs.

Reaction: A lot of people within and without the youth movement of the 1960s and early 1970s simply got scared. Rebellious young people tried to create their own societies, their own rules, but they proved thoroughly inept at governing themselves.

In some hippie communities, young women were told that it was impolite to refuse sex to anyone who asked, a stricture that led to objectification, dissociation and resentment. Drug use inevitably led to drug abuse, to addiction and despair. A drug-based economy is a criminal economy. People tire of living the outlaw life, even if they manage to avoid the cops.

If you're young, ask your elders about those days. There are a million stories about how the hippie movement soured during during the 1969-71 period.

When young people discovered the scariness of a structure-free life, when they understood that they were were incapable of making their own rules, when they reached their greatest point of psychological vulnerability, the fundies were waiting for them: "You want rules? We got 'em. We got plenty."

Having lost the habit of rational thought, this generation gravitated toward leaders who said: "Don't worry. I can do the thinking for you."

As the 70s came to a close, those very leaders gathered in an auditorium in which Ronald Reagan announced that he often read the Bible for guidance -- "The Old Testament AND the New!" (For some goofy reason, Reagan always felt obliged to specify that he thought both testaments were spiffy.) This statement was greeted with wild applause. Animalistic applause. The scene was downright pagan; the people in that room might as well have been wearing deer skins and antlered helmets.

And that's how the religious right was born, Charlie Brown.
posted: 6:39 AM