Global Research has published an excellent piece on our ability to spot Nazis. They have the ability to pop in and out of visibility, just like Sue Storm. Okay, maybe not exactly like her: Nazis do not will themselves into transparency. Instead, they become visible only when the media decides that seeing them is politically permissible. At all other times, they can goosestep around in broad daylight, and no-one ever notices -- at least no-one connected with western journalism. 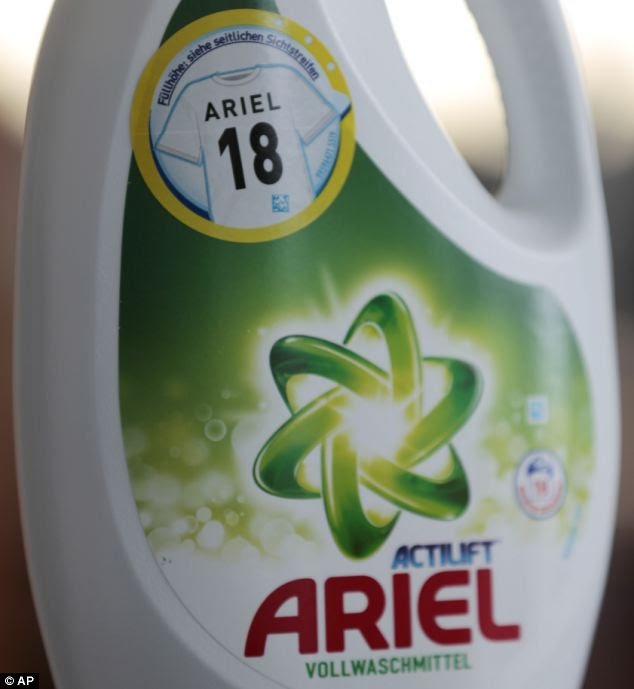 For example, the UK's Daily Mail spotted Nazism on the label of Ariel laundry detergent. Many other news outlets have covered this story.

You are probably looking at this image and wondering: What does that have to do with Nazis? Well, it all comes down to the number 18. The company says that this figure represents the loads you can expect to wash with the product. However, some neo-Nazis have used 18 as a coded way of referring to Adolf Hitler, because A is the first letter of the alphabet and H is the eighth letter.

(Some years back, there was a neo-Nazi group in the UK called Combat 18, pronounced "Combat One Eight." They are still in business and have branched out into other countries.)

Another code number is 88 -- "Heil Hitler." And wouldn't you know it, Ariel has used that number on another product label. (Another British neo-Nazi group was called Column 88.)

So there we have an example of (alleged) visible Nazism. We're allowed to see such things if they exist on our everyday products.

We are also allowed to see the word "Nazi" in print when dealing with a cab driver who likes to do his job while wearing a swastika. I admit that this practice is ugly and disturbing. But ultimately, I can't be very upset about one crackpot cabbie who wants to out-crazy Travis Bickle. The matter is trivial and transitory. 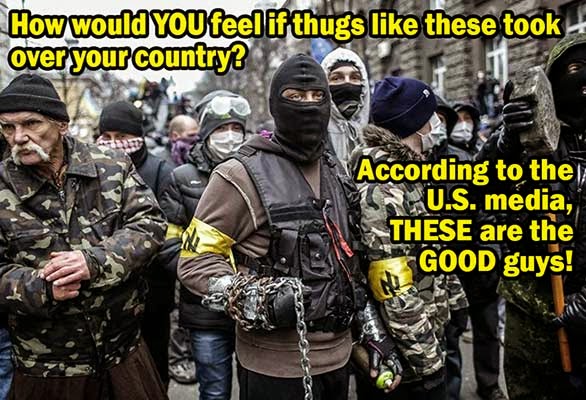 For mainstream reporters, that New York cab driver is a visible Nazi. But there's a place where the Nazis are invisible to our media gaze. In this place, fascists remain unseen even when they brazenly march through the street en masse while wearing nationalist symbols and carrying weapons and trying their damnedest to look like toughest of tough dudes.

I speak, of course, of Ukraine. In that nation, the local Nazi variants have been parading through the streets of Kiev. They are pretty much running the show. They proudly carry images of Stepan Bandera, Hitler's henchman in Ukraine.


While Procter and Gamble apologizes for the “false Adolph Hitler associations” on the packet of Ariel detergent, as reported profusely in mainstream news tabloids (see list below), Western leaders including John Kerry, John McCain, Victoria Nuland and Catherine Ashton are not ready to say “sorry, we supported the Neo-Nazis who are killing innocent civilians, we made a really big mistake.”

"Adolph" should be "Adolf." Sorry about that, but the mistake was not mine. Bit of a pet peeve with me...


A google news search for the Word “Nazi” on May 9 confirms the Western media’s self-denial of the role of neo-Nazism in Ukraine. The word is never mentioned in relation to Ukraine. Journalists and editors are instructed not to use the term.

Emphasis added. I can't recall seeing the term in any of New York Times article about the Ukraine crisis, even though there are many Jewish people in New York City who might be more than a little concerned about the rehabilitation of Stepan Bandera's reputation in that part of the world. If the folks running the NYT allowed themselves to call a Nazi a Nazi, readers of that newspaper might better understand why the folks in Crimea and Eastern Ukraine want nothing to do with the madness in Kiev.

Again: This is why I can't get very worked up over the firing of Jill Abramason.
posted: 8:51 PM