Ukraine has been a huge upfuck for the Obama administration. Of course, the Republicans can't try to capitalize on this massive mistake, since everyone knows that their neocons are even worse than "our" neocons.

Mike Whitney traces Obama's great error to a 1997 article by Zbigniew Brzezinski, titled "A Geostrategy for Eurasia." The Zbig plan was for America, the sole superpower, to draw Ukraine away from Russia. Afterward, a weakened Russia could be divided up into a number of different states.

So how did this scheme work out? Led by a Brzezinski student, the US made its big play -- and the results bear no resemblance to anything that Brzezinski predicted. These days, I'm not sure many people feel comfortable referring to the United States as the "sole superpower." First Iraq, then the Great Recession, then the Ukraine coup: These three blows may have punched America right out of superpower status.

Yet we still refuse to acknowledge the harm that we've done to ourselves. Moon of Alabama links to some recent articles which illustrate our hilarious capacity for self-deception...

Look and see: Obama wants other world leaders to going along with this "isolate Russia" policy.

Obama and Kerry are strutting around the world, acting as though people still like and respect us. As one M of A commenter puts it:


The utter blindness of the Administration is nevertheless astounding. They are in a time warp beyond all time warps. Party like it's 1947!

Despite Obama's silly efforts, Russia is not isolated. In fact, Russia and China have signed the "gas deal of the century."


While the new deal will not be a substitute for European markets, the ability for Russia to shut off 40 billion cubic meters of gas to the EU may become a persuasive bargaining chip, one US shale gas will be unable to compensate for well into the foreseeable future, if ever.

The new deal will take effect in 2018, so may not immediately compensate for US-EU sanctions leveled against Russia in the latest Ukraine row. However, many of these sanctions have had either disappointing effects, or have all together failed to bite. Sanctions aimed at Russia’s aerospace industry for instance, fell flat, both because Russia is indispensable to the United States (its astronauts entirely depend on Russian launch systems) and Western alternatives are years from implementation. By the time these sanctions do begin to bite, Russian gas will be flowing into China, and Chinese capital will be flowing into Russia’s economy.

Russia and China have agreed to pay each other in domestic currencies. Russia is going to be sending oil to India via a pipeline that will probably go through China. (There's an alternative plan involving Afghanistan, but I think that country will be considered toxic for a good long while to come.)

We can't even get our own people into space. If we need to send up an astronaut, we would have to rely on those Russians whom we're trying to isolate. Meanwhile, Europe and Russia have begun to collaborate on a new, highly advanced space program. Now that we have retired our ancient space shuttles, the EU and Russia will build What Comes Next. NASA is out of the picture. 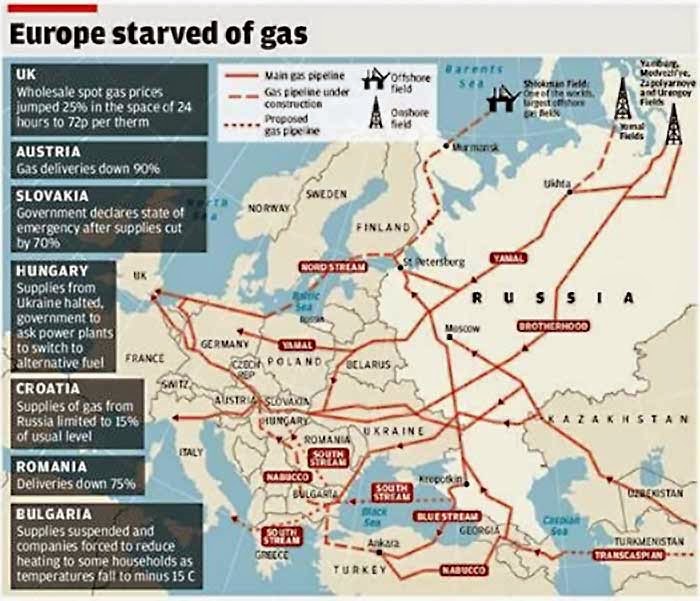 The Ukraine debacle has actually driven a wedge between the US and Europe.


Germany and France have shunned sectorial sanctions without first trying again to broker a dialogue between Ukraine's government and pro-Russian separatists in the country's east — a step that garnered only lukewarm U.S. support.

Officials say Putin maintains an amiable relationship with German Chancellor Angela Merkel. France, meanwhile, is moving ahead with a $1.2 billion contract to sell warships to Russia.

Most Americans still don't know about Victoria Nuland infamous "Fuck the EU" remark. But the EU knows all about it, and they are responding predictably: "Fuck us? Fuck you!"

Sorry, Zbig, but I don't think that Russia will be splitting into three or four "little Russias" any time soon. In fact, they got the Crimea back, and may even soak up part of Ukraine itself.

Argumentum ad Hitlerum: In the UK, Prince Charles -- sensing an historic opportunity to make an ass of himself -- compared Putin to Hitler. I like what Al Jazeera has to say about that sort of thing:


In recent weeks, we have once again returned to 1939 as the bizarre Hitler analogy is now being used to describe Putin. The irony here is that the right wing neo-Nazi groups within the pro-Western Kiev regime consider themselves as the Russian president's greatest foes.

Precisely. Our media considers it fine to compare Putin to Hitler, but it's not fine to compare the Right Sector in Ukraine or the Nusrah Front in Syria or the Iranian MEK to the Nazis. If a modern American journalist were to TARDIS his way back to 1940, he'd probably say that Churchill was another Hitler. But he wouldn't say that Hitler was Hitler.

How it started: A reader hipped me to an exceptional piece by Michael Hudson, excerpted from a new book titled Flashpoint in Ukraine. I'll take the liberty of offering a few long-ish excerpts:


In a recent interview in The New York Review of Books, George Soros outlines what he thinks should be done for the Ukraine. It should “encourage its companies to improve their management by finding European partners.”[2]

This means that kleptocrats should sell major ownership shares in their companies to Westerners. This would give the West a stake in protecting them, pressuring their government to tax labor rather than the wealthy, and helping them cash out and keep their takings in London and New York to finance Western economies, not that of Ukraine.

Hudson then discusses the rape of Russia that attended the fall of Communism:


The West’s ideological victory – or more to the point, the neoliberal anti-labor, anti-government and pro-Wall Street game plan – was sealed at the Houston summit in July 1990. Russian Prime Minister Gorbachev and other Soviet leaders endorsed the World Bank/USAID plan for shock therapy, privatization, deindustrialization and a wipeout of domestic personal savings (characterized as an “overhang”) to start by impoverishing the population at large and vesting an overclass with the most unequal distribution of wealth in the Northern Hemisphere.

U.S. Cold War advisors urged Russia and other post-Soviet states to give hitherto public assets and property to individuals, preferably to plant managers and political insiders. The cover story was that it did not really matter who got them, because private ownership in itself would lead the new owners to re-organize production along the most profitable lines. Pinochet’s Chile was held out as a shining success story, and a right-wing Pinochetista movement started in Russia.

Subsidized by U.S. support and imposed by Yeltsin’s presidential fiat (unconstitutionally, over the objections of the Duma), ownership of hitherto public investment and natural resources were given to managers who made their fortunes by selling their takings to Western investors.

Western banks helped kleptocrats keep the proceeds from these sales abroad so that they didn’t have to reinvest it at home (or pay taxes). The tax burden was placed on labor and consumers, not on the windfall gains and natural resource rents, land rent or monopoly rent being siphoned off.

Instead of bringing about Western European or American-style industrial capitalism with their heavily subsidized technology and protected agriculture, the effect has been to de-industrialize Russia and other post-Soviet economies, except for East Germany and Poland. In effect, the former Soviet Union was colonized in the world’s largest resource grab since Europe’s conquest of the New World five centuries ago.


These leaders have left Ukraine looking like a Northern Hemisphere Nigeria. Real wages plunged by more than 75 percent from their 1991 level wages already by 1998 and have stagnated ever since...

This “cheap labor” makes Ukraine appealing to European investors, who now are making their own move to obtain what Ukraine’s oligarchs have grabitized. The West has made it clear that it will help these individuals convert their takings into cash and move it safely into Western banks, luxury properties and other nouveau riches assets.

Pipelines: The Right Sector has threatened to blow up the pipelines delivering Russian gas to Europe. Who would be hurt? Europe, certainly. Russia would be hurt too, but the wound would soon heal, since Russia has massive new markets in Asia.

Finally: What does this debacle say about Obama? Although I became very cynical about Obama in early 2008, even I never suspected that he would screw up this thoroughly. So much imperialistic overreach, so soon after Dubya...! Who'd a thunk it?

Some of you may now take this opportunity to repeat a familiar mantra: There is no difference between Barack Obama and George Bush. Many of you will repeat an equally familiar claim -- that a vote for Obama was the same as a vote for John McCain or Mitt Romney.

Despite the bleak picture I've sketched in above, one must distinguish this disappointing Democrat from his Republican opponents. Most of the dissimilarities concern domestic policy.

In foreign policy, the key variant concerns the role of the military. I am convinced that Obama does not want war. I am also convinced that Romney (who thinks that his "brand" is experiencing a resurgence) did and does want war, particularly in Iran. For that reason alone, we must be grudgingly grateful that Obama prevailed in 2012.

McCain, I am sorry to say, has made his war-lust sickeningly clear. That man's many admirable qualities are undone by his bellicosity.

Obama doesn't really like to do the "boots on the ground" thing. Sure, there was the surge in Afghanistan -- but Afghanistan was one of Bush's errors, and I have no doubt that Obama would have preferred not to clean up his predecessor's mess. At heart, Obama is a CIA guy, not a Pentagon guy. He favors economic warfare, covert strategies, drones and Special Forces.

So: Our current president relies on the cloak and the dagger and the greased palm, while Bush preferred to lob depleted uranium shells. Yet in both administrations, neocons set the agenda. Neocons come in different flavors, of course: I don't think Michael Ledeen cares about Russia the way Zbig cares about Russia. Still, under both Obama and Bush, grand schemers have pursued delusional dreams of conquest and glory...