Okay, I know that there's some sort of war or near-war or something going on the Ukraine, and I've been kind of concerned about that -- especially now that Hillary, of all people, has played the Hitler card. (Why, Hillary, why?) And Iraq is falling apart now that we pulled out, and Afghanistan is likely to do the same soon, and Syria is a huge damned bloody mess. Also there are 20 million slaves in the world. And the NSA has apparently been spooking the Senate.

All of this evil stuff can definitely harsh your buzz, no doubt about it.

But now I want to direct your attention to a real scandal.

Due to some insane import restrictions, it is becoming difficult to bring real Kolinksy artist's brushes into the United States. According to the National Art Materials Association...


The U.S. Fish and Wildlife Service is currently preventing any importing or exporting of natural sable hair brushes. It has to do with specific forms needed by the US government and the original source of the hairs used.

Previously, the European brush manufacturers had been using their own version of this form and the Fish and Wildlife Service had been accepting it. That was until the sable became an endangered animal. Please keep in mind though, that the species of sable used to make the artist brushes are not endangered. But because of this, the US is requiring their form be filled out and stricter regulations followed.

Therefore, we and many other art supply companies in America, cannot get replenishment for our sable brushes. This has been going on for at least 6 months and we are hoping that an agreement can be reached by the first of the year. 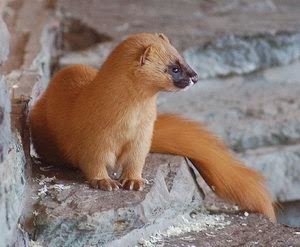 Basically, here's the story: Kolinsky fur comes from a red weasel native to the Kola Peninsula and the Tajmyr region of Siberia. The best of the best fur comes from the tail of the male and is harvested only in the winter months. This precious commodity is shipped to Europe, where it is shaped into the world's finest brushes by skilled craftspeople.

The firms that make artists' brushes love to convey the impression that their Kolinsky fur comes from a land where balalaika music wafts over the permafrost. In reality, these days, most Kolinsky fur is harvested in farms located around Harbin, in China. (I'm not sure how many Kolinskys are still scuttling around the Kola Peninsula.)

Thanks to stringent new regulations, when fur items come into the United States, the American Fish and Wildlife Service tracks the fur to its point of origin. For some reason, the Chinese have been telling the FWS that the Europeans got hold of all that Kolinsky fur illegally, even though that's not true. The Euros imported it on the up and square, as they have always done.

It is possible that the Chinese are hoping to get into the business of manufacturing fine Kolinsky brushes, and that they want to drive those ancient European firms out of the market.

If so, fat freakin' chance. Producing truly top rate brushes on a routine basis is something that a company cannot accomplish in a single generation. These fur-tipped implements are hand-shaped by gen-yoo-ine masters. A good brush can be a fine work of art in and of itself.

I know what you are now dying to tell me: "Fur is murder! Use synthetics."

First, there is such a thing as justifiable homicide. Second, Kolinsky hair is harvested from the tail. It grows back in a year. The animal does not die.

Third, synthetic brushes just don't work the same. I have used synthetics -- the Winsor & Newton "University" series is nice -- but they don't last. If you're inking a comic book, you are lucky if a synthetic gets you to page 10. A great Kolinsky is a lifetime investment. It's an extension of the artist's hand -- of his or her mind.

My favorite brush in the world is a French beauty called the Raphael. Quite expensive, she is -- but worth it. (You'd be nuts to buy one from anyone other than these guys.) Even in the larger iterations, she comes to a point so sharp it could cut diamond. A Raphael knows where the stroke should go before you do. Back in the early 1980s, I went without food for nearly two whole days to buy a Raphael.

The second best brush is the venerable Winsor & Newton series 7, the preferred tool of Queen Victoria. The Series 7 is superb, but the Raphael is the quintessence of mysticism.

If you want to buy American, consider the inexpensive Kalish. (The brushes are actually made in Ireland.) They don't transport you into the beatific realms, but they do the job -- for half the price.

The truth is, I personally do not need any more Kolinskys. My collection, which came together in better days, includes two sublime Raphaels. One should use them only while playing John Tavener's The Veil of the Temple or the "Transformation Music" from Parsifal. On Christmas Eve, if you listen close, you can hear those two Raphaels sing Il est né le divin enfant.

So I'm good. But what about younger artists? Are they doomed to nylon, thanks to an infuriating spat between the Chinese and the FWS?

This will not stand! In previous posts, this blog denounced the romanticization of revolution. But damn it, some things are worth fighting for!

(We'll get back soon to the Ukraine thing. As if anyone's still interested in that.)
posted: 3:40 PM