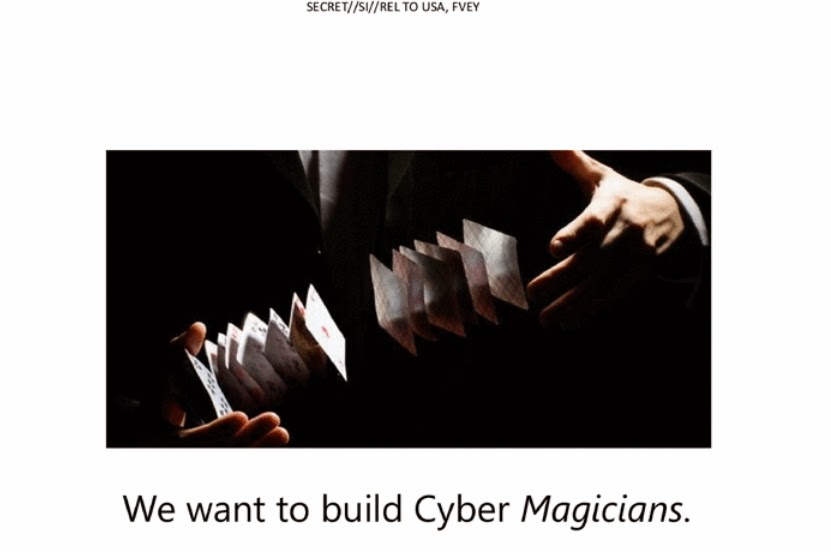 I doubt that this blog has ever published a more important post.

Glenn Greenwald has just published the most mind-blowing document I've ever seen. Ever.

It's from the Snowden cache -- and no-one can claim that this is old hat. What you are about to see confirms many of the wilder suspicions that "fringe" researchers have toyed with for the past couple of decades.

Even Greenwald doesn't seem to understand what he has hold of here.

Here's his piece. He recognizes, at least, that this presentation by the GCHQ (Britain's version of the NSA) is about infiltration of online communities. But it's about more than that. It's about the use of online trickery to manage the perceptions of entire societies.

The document itself goes into some very weird-n-wild areas -- too weird and too wild for Greenwald. Even he doesn't grasp the full implications. Hell, even I probably don't!

This document appears to be a Powerpoint presentation. Alas, we can only guess what the presenter himself might have said to his audience as he showed these slides.

First, let's look at what Greenwald has to say (and keep in mind that this is just the iceberg's tip):


The broader point is that, far beyond hacktivists, these surveillance agencies have vested themselves with the power to deliberately ruin people’s reputations and disrupt their online political activity even though they’ve been charged with no crimes, and even though their actions have no conceivable connection to terrorism or even national security threats.

Government plans to monitor and influence internet communications, and covertly infiltrate online communities in order to sow dissension and disseminate false information, have long been the source of speculation.

But these GCHQ documents are the first to prove that a major western government is using some of the most controversial techniques to disseminate deception online and harm the reputations of targets. Under the tactics they use, the state is deliberately spreading lies on the internet about whichever individuals it targets, including the use of what GCHQ itself calls “false flag operations” and emails to people’s families and friends. Who would possibly trust a government to exercise these powers at all, let alone do so in secret, with virtually no oversight, and outside of any cognizable legal framework?

Then there is the use of psychology and other social sciences to not only understand, but shape and control, how online activism and discourse unfolds.

Now let's look at the slides (I am presenting most of them but not all). If you've been paying any attention to blogworld over the past ten years, you'll know that these techniques are being used against all of us -- not just against "hackers," and certainly not just against terrorists. 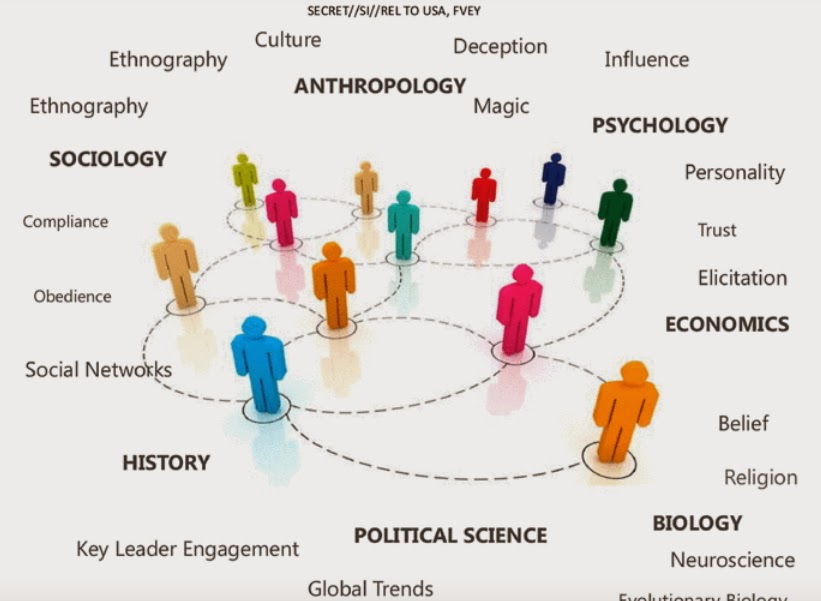 Magic. Belief. Religion. Deception. Social networks. Get the picture? Many of us have long suspected these things, although we hesitated to verbalize our suspicions for fear of ridicule. 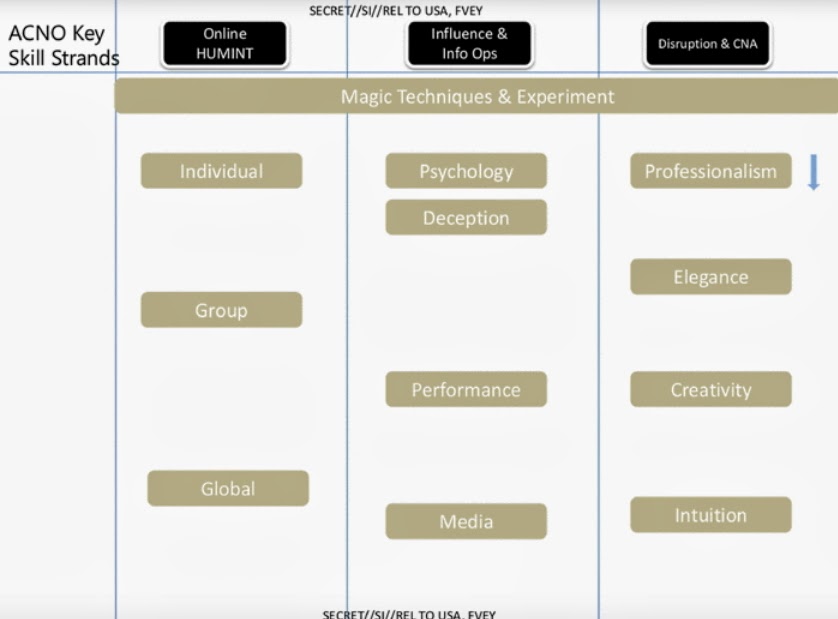 Note that word -- "Global." This is about world-wide control of the internet -- of society. Nothing less than that. 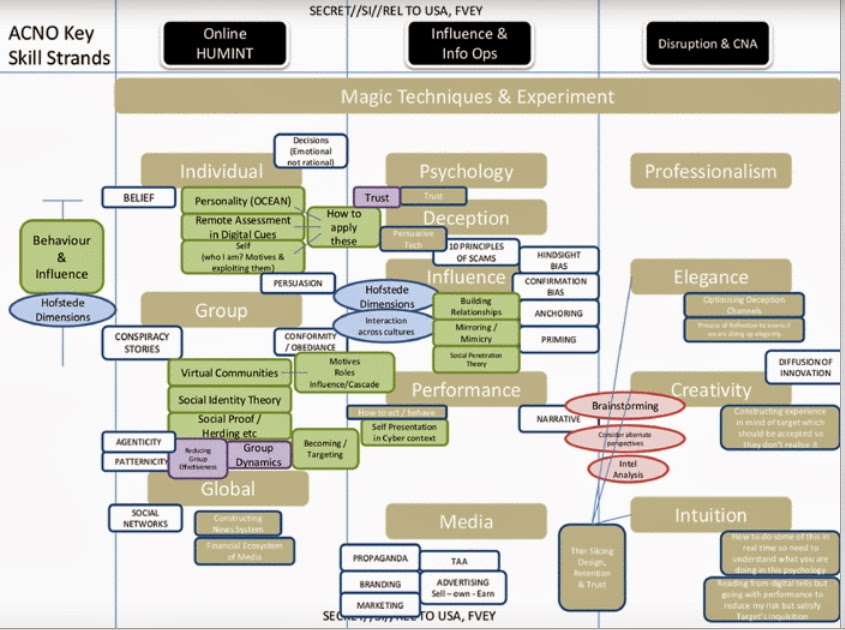 One phrase leaped out at my "CONSPIRACY STORIES." For quite some time, I have suspected that intelligence agencies used "conspiracy culture" as a means of social manipulation. Now we have proof.

The phrase "Hofstede Dimensions" refers to the work of social psychologist Geert Hofstede. His "dimensions" concern the grounds for communications between groups and cultures. You can find a lot about Hofstede's theories if you do a little Googling. 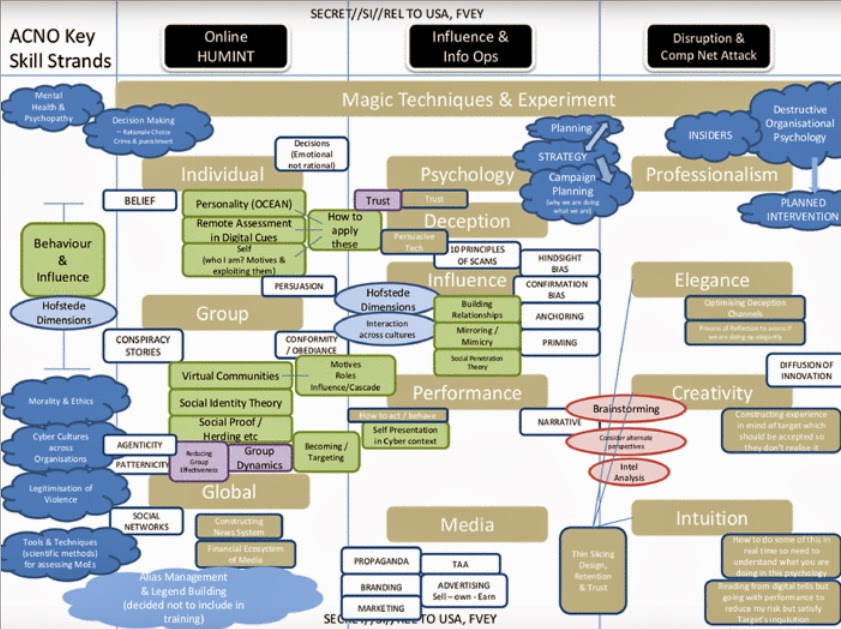 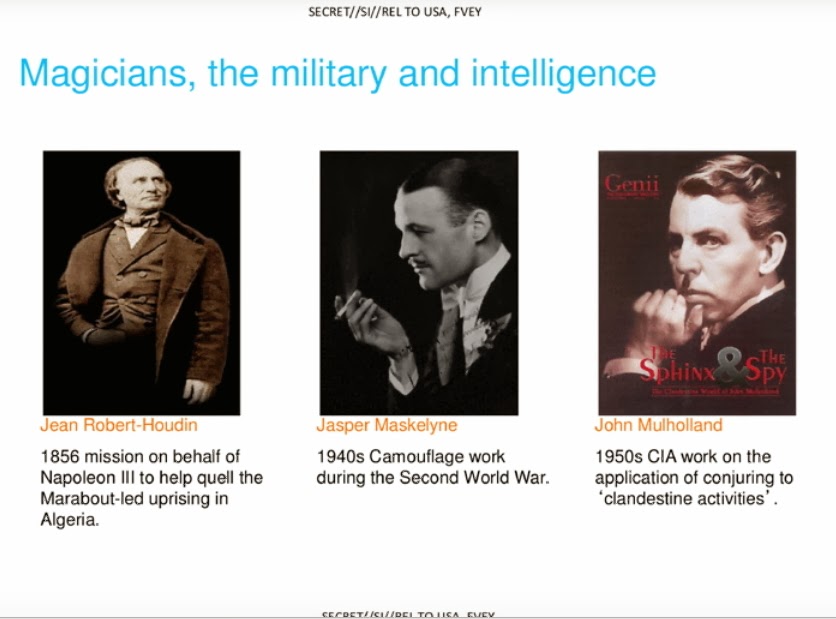 John Mulholland was a stage magician recruited by the CIA. After all, if a field agent is going to slip a drug into someone's drink, that agent has to know some sleight-of-hand, doesn't he?

During the war, Maskelyne -- working for British intelligence -- managed the considerable trick of making Alexandria "disappear" from German view and "appear" ten miles downriver. Result: The Nazis missed the city and dropped bombs on open land.

To my shame, I didn't know about Robert-Houdin's work for Napoleon III until just now (even though I've read a lot about the Second Empire in recent years).

We'll have more on the "magic" angle at the end. 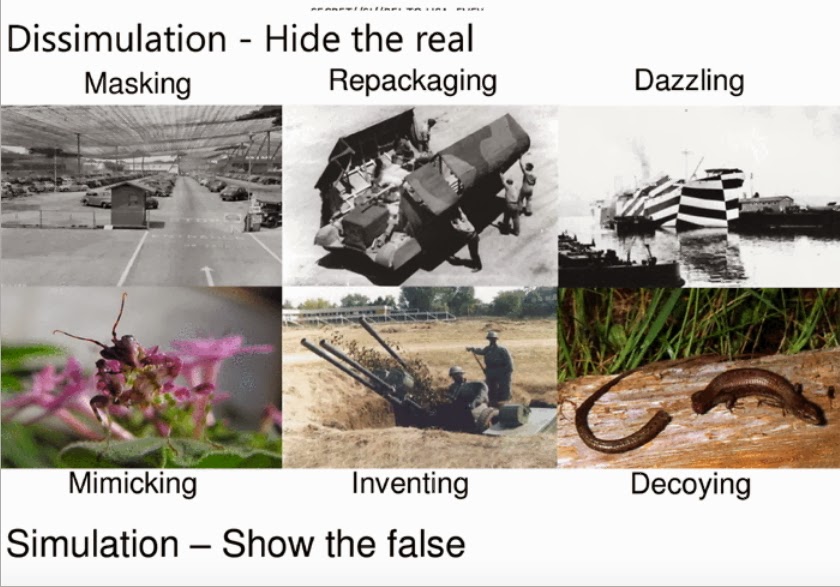 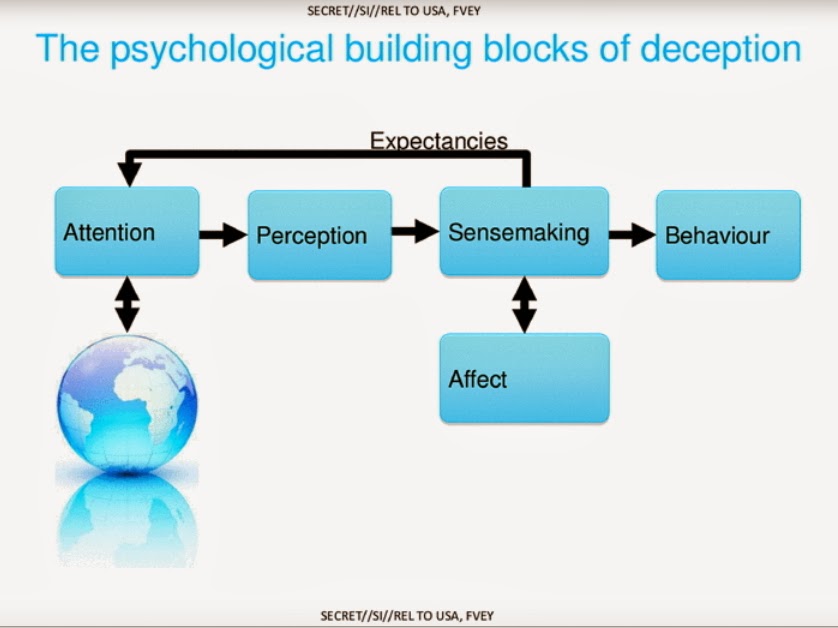 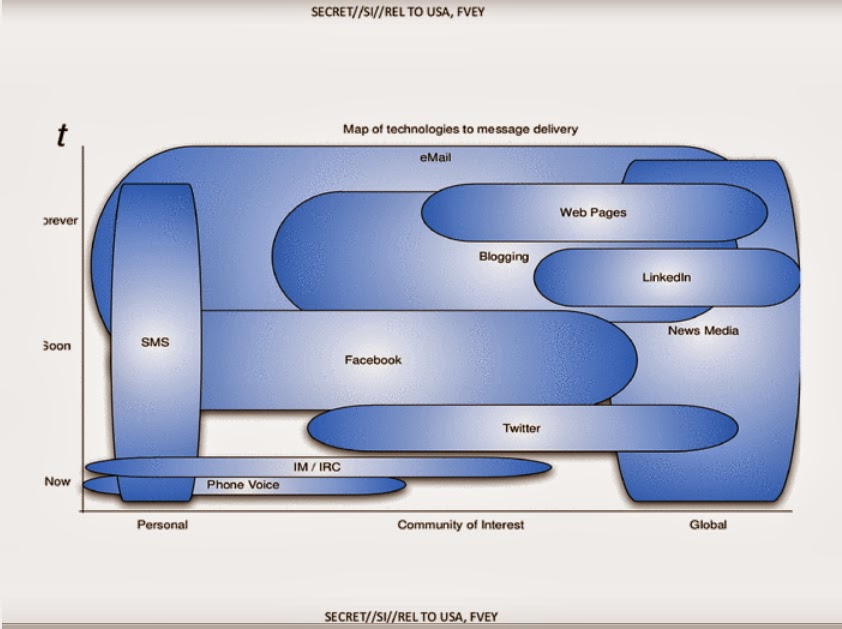 Still think that this is just about terrorists?  What more proof do you need that these spooks plan to control entire populations? 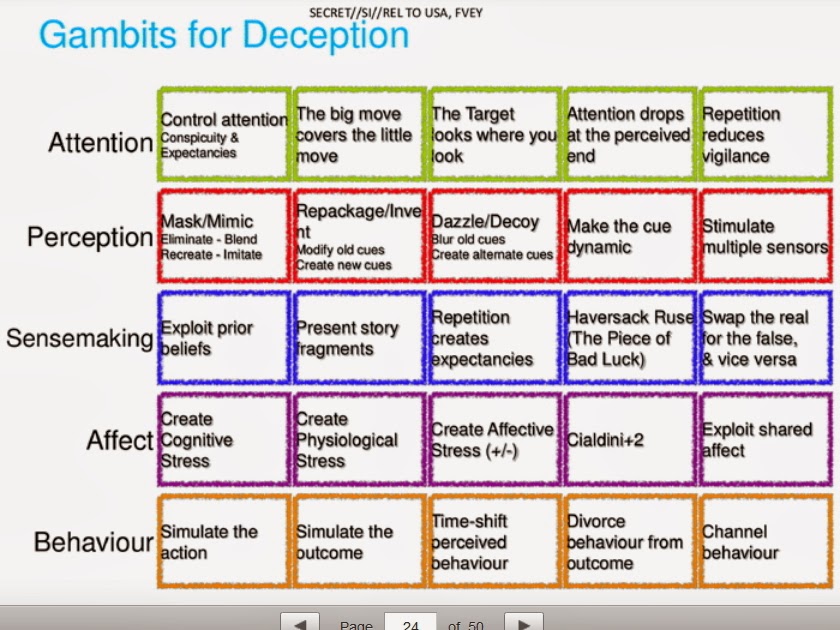 The "Haversack Ruse" was a bit of military deception from World War I which became a standard intelligence ploy.  JFK researchers ran into many Haversack ruses. 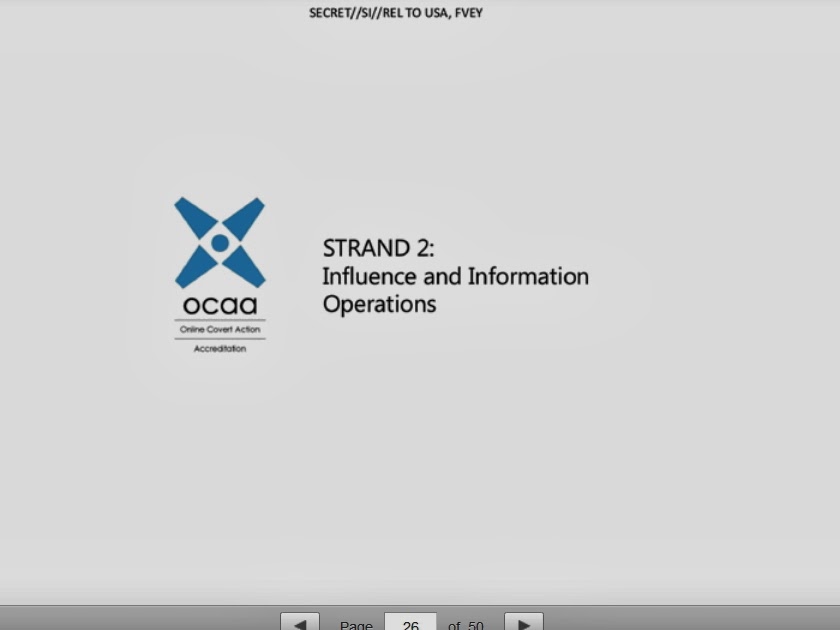 These people consider Online Covert Action routine. They've even reduced it to an acronym: OCA. 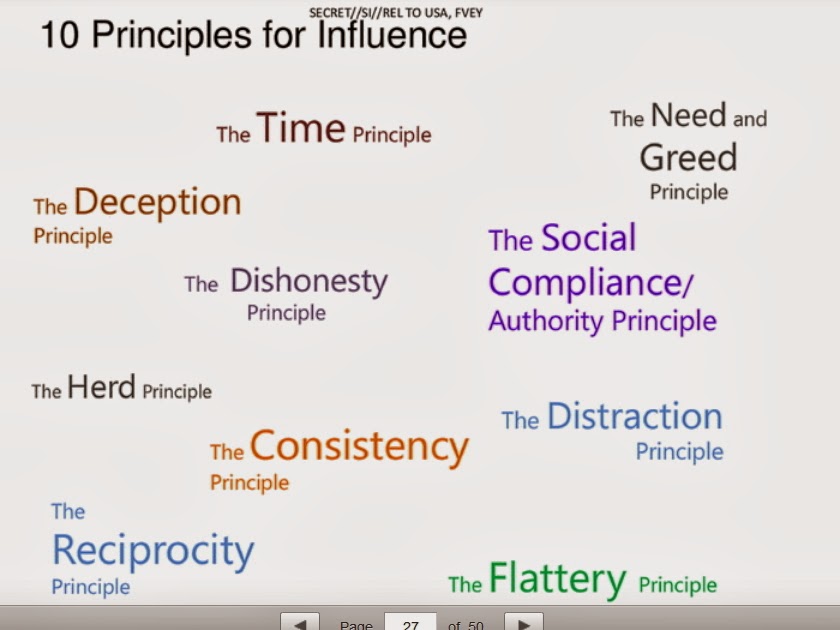 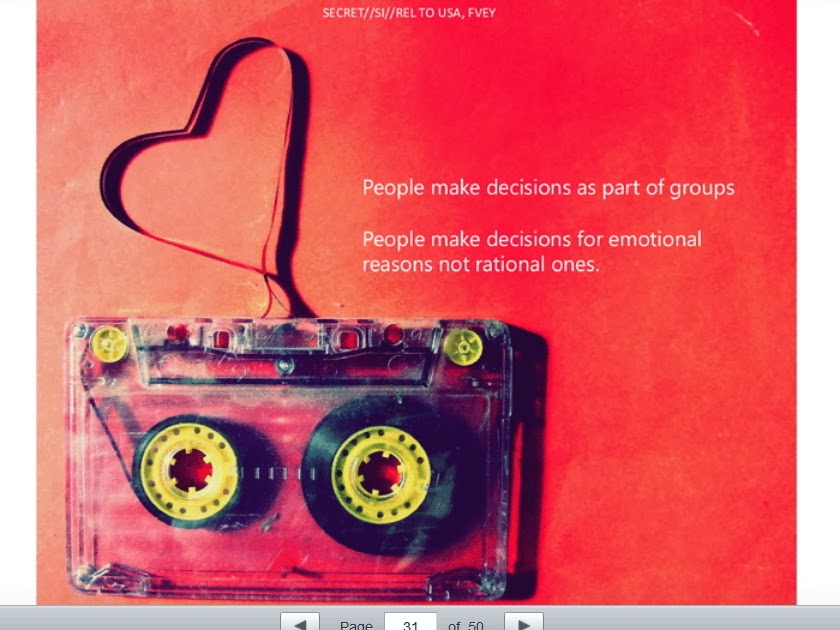 Readers should look at the slide above and ask themselves one question: Does this presentation explain what happened all over the blogosphere throughout  2008?

Does this presentation not explain the use of sock puppets and "persona management" to direct online debate? A fake online "army" can create the impression that an idea (or a candidate) is far more popular or unpopular than is actually the case.

And now we get to the really freaky stuff. I honestly was not expecting to see this... 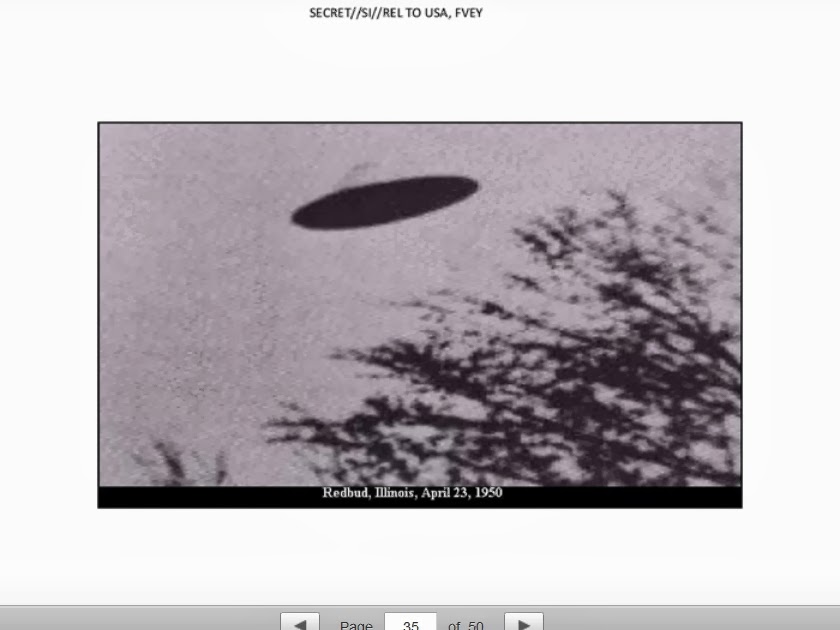 Why do UFO images appear in a GCHQ document about deception, magic tricks and social control? Obviously, the people who put this document together do not believe in aliens. This ain't about that. This presentation is about the manipulation of large numbers of people. It's about deception.

Mark Pilkington, a British researcher, has done some remarkable research in this area. More on that below. 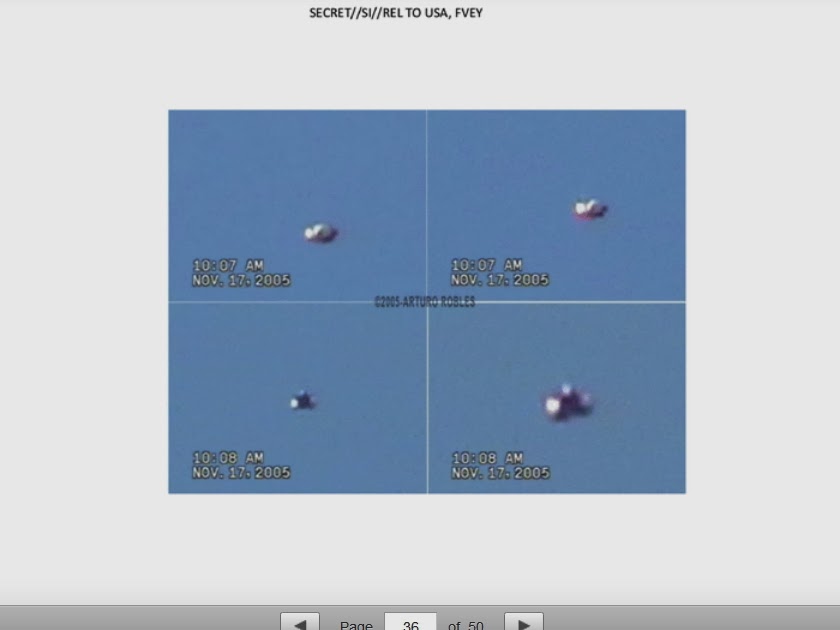 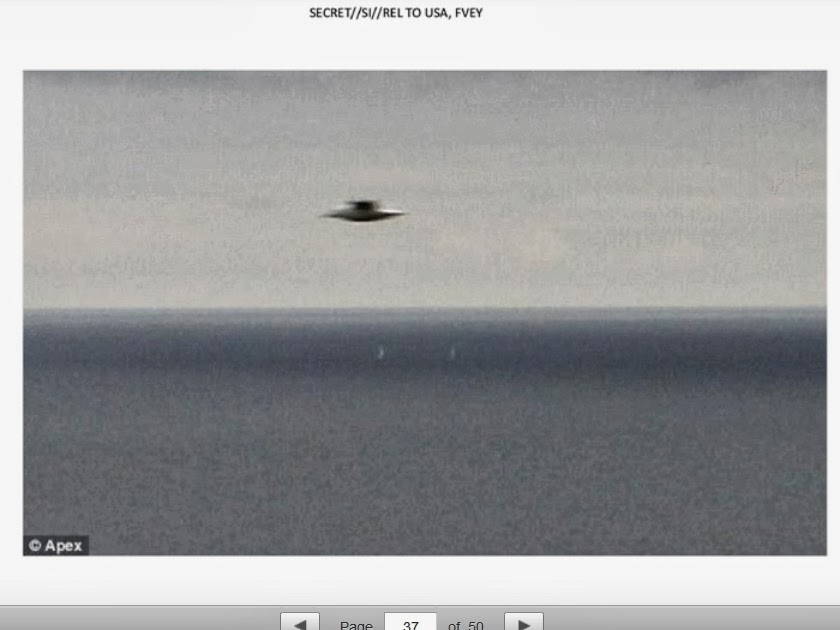 I'd give a lot to know the context. Just what did the presenter say about the preceding flying saucer photographs? How do they tie into the theme of control?

My suggestion: Ufology, unimportant in and of itself, is a testing ground for deception tactics. If those tactics prove effective in that arena, they may be imported into the "real" world and put to serious use. 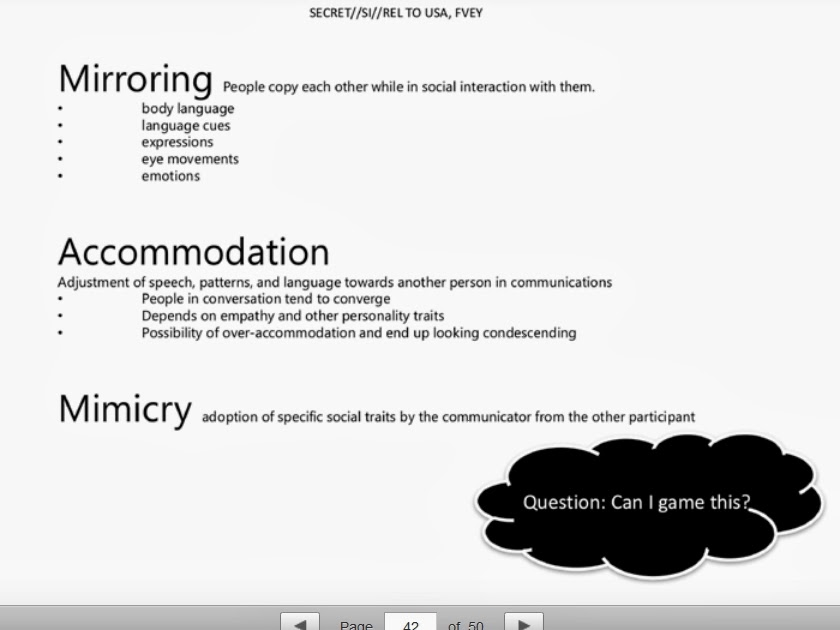 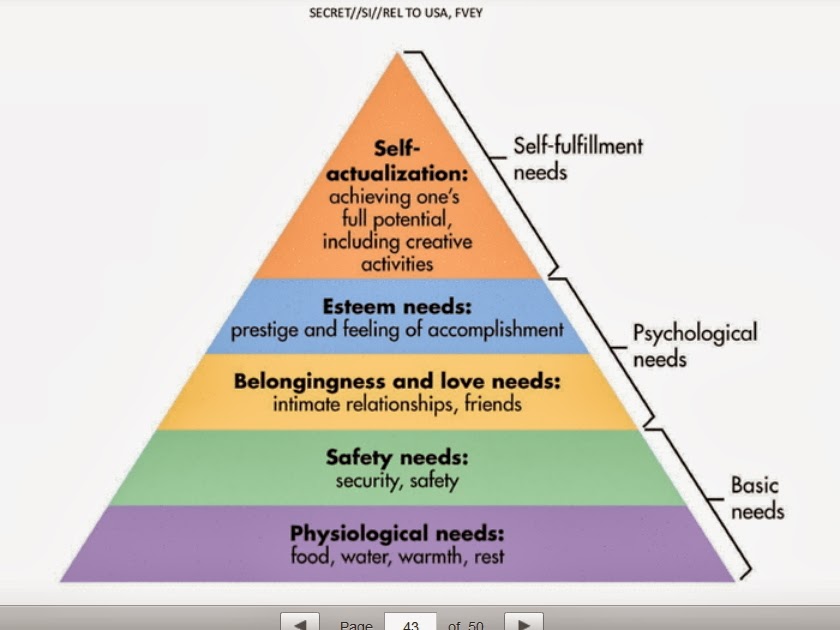 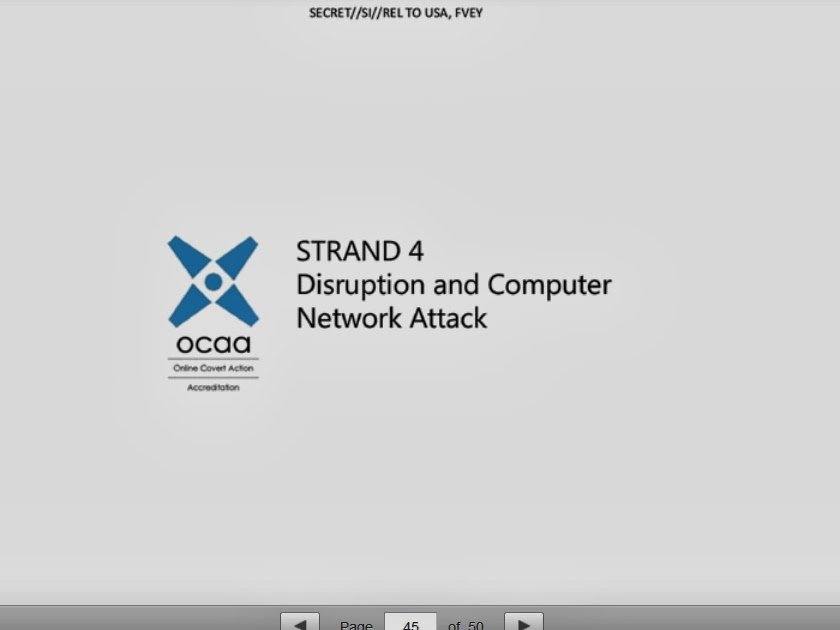 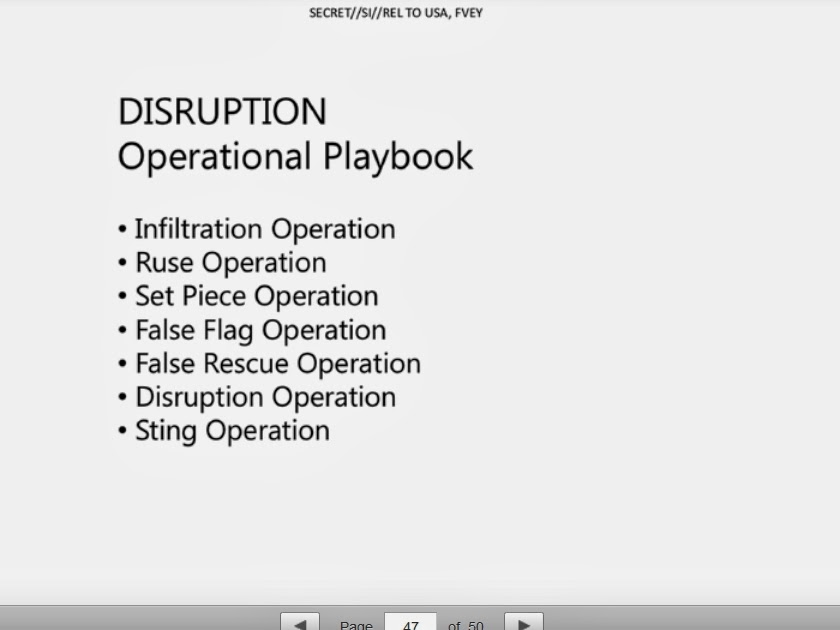 By this point, we all know what a "False Flag Operation" is. But what's a "False Rescue Operation"? 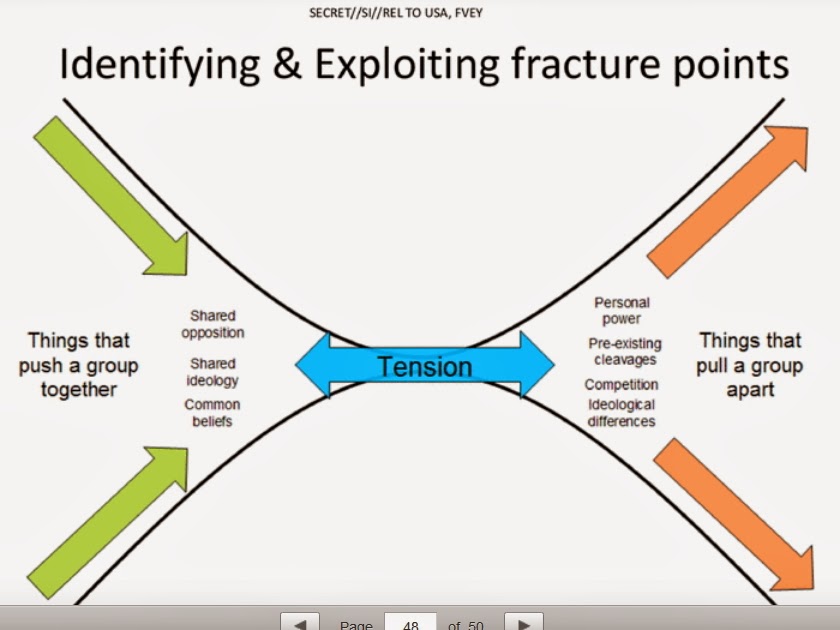 Heh heh. How many times have we seen the results of this kind of operation? If you are (say) a JFK researcher, you probably guessed decades ago that these tactics were in use.

By the way: This chart also demonstrates the tactics that have been used against Greenwald and Snowden themselves. 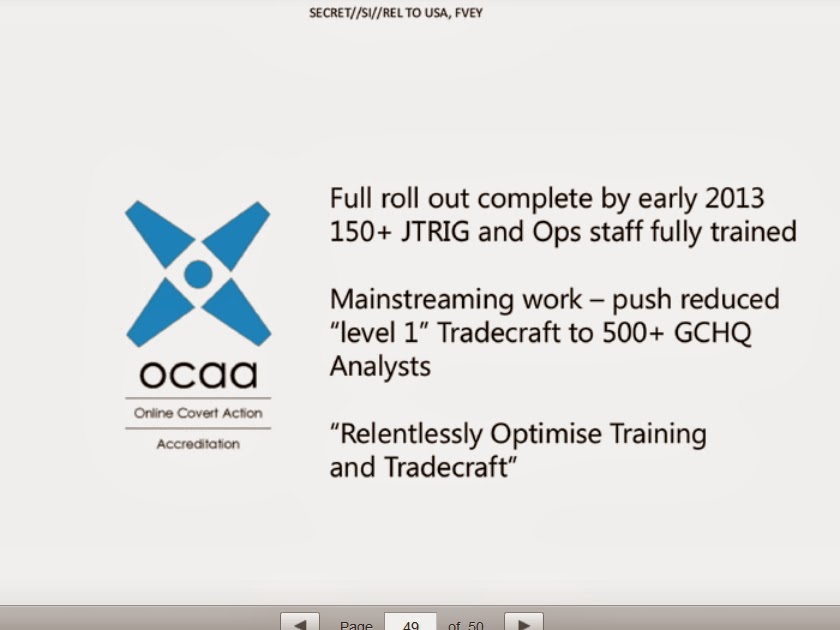 If you want to see the full presentation, go here.

This is that. This document is that scene.

So: Why are those UFOs in there? What's all this about magic, magicians, religion, belief systems, and group control?

The following embedded lecture by Mark Pilkington may shed some light. And it's pretty damned fascinating in its own right. I wrote to Mark just now, directing his attention to Greenwald's piece. I told him: "Basically, it looks like a presentation YOU might give...but it comes from GCHQ!"


The Abuses of Enchantment: Folklore and Deception in the Disinformation Age - Mark Pilkington from Breaking Convention on Vimeo.
posted: 2:59 AM