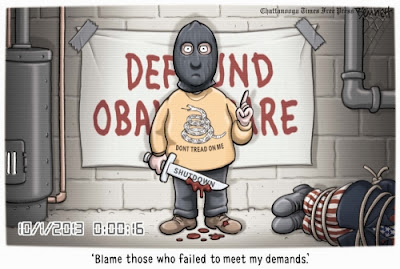 Here are some interesting reactions to the Obamacare/shutdown/debt ceiling/teabagger battle. I love Riverdaughter's incisive wording:


Here’s my take on both parties’ health care policies/bills:

Republicans= Sharp stick in the eye

Democrats= Better than a sharp stick in the eye


This is the real motivation behind all the tricornered hats and the incantations about liberty and all the conjuring words that have summoned up the latest crisis in our democracy. Corporate money is the power behind all of it, and that corporate money has but one goal -- the creation of a largely subjugated population and a workforce grateful for whatever scraps fall from the table. To accomplish this, the corporate money not only had to disable the institutions of self-government that are the people's only real protection, it had to do so in such a way that the people expect less and less of the government and, therefore, less and less of each other, acting in the interest of the political commonwealth. 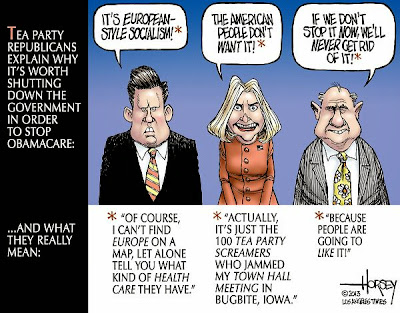 Here are some numbers from ThinkProgress:


The economic cost of Congress’ failure to avert a shutdown is quickly mounting, to the tune of $300 million a day. Now, financial analysts say the shutdown could also worsen the nation’s deficit.

This year, the deficit was expected to shrink to its smallest shortfall since before the recession. However, as a new Bank of America Merrill Lynch Global Research Report explains, the loss of tax revenue from the masses of furloughed workers, coupled with the cost for agencies to implement the shutdown, will likely “put upside risk” on the budget deficit.

Meanwhile, here's what the world looks like from within the right-wing bubble (UK version):


The American Left’s hatred for all things conservative has been on full display in Washington in recent days, with the White House and its allies in Congress heaving with anger and indignation over mounting opposition to the Affordable Care Act, also known as Obamacare, and growing calls to defund it.

Newsflash: By overwhelming margins, the American people do not want a shutdown over Obamacare. Newsflash: The program passed Congress and survived a Supreme Court challenge. Newsflash: Obamacare was a big, big issue in the 2012 campaign; Obama won. And a huge percentage of the people who tell pollsters that they don't like Obamacare feel that the law doesn't go far enough. They -- we -- wanted single payer. That's the part the teabaggers don't tell you.

Wonkblog asks: "Remember when Republicans were worried about ‘economic uncertainty’?"

Sure do. I recall, for example, when Bernie Marcus (founder of Home Depot) said that he could never have started his corporation today because all of the Obama-era regulations led to "uncertainty." Of course, there have actually been fewer regulations under Obama...and Bernie seems to be doing quite well in Canada, which has regulations aplenty. Back to Wonkblog:


A government shutdown, and the prospect of a default on the national debt, is pretty much the definition of economic uncertainty. Contracts are put in limbo. Future interest rates are unknown. A new healthcare system lies in the balance. And meanwhile, a whole host of issues that businesses need resolved in order to plan several years in advance -- environmental regulation, immigration policy, the tax code -- go almost entirely unaddressed.

These are the conditions brought upon us by a small core of Republicans who can't let go of their opposition to a law their colleagues passed three years ago.

Krugman takes it from there:


I remember when they claimed to be worried about economic uncertainty — but it was completely obvious even at the time that this was nothing but an attempt to put a new, quasi-academic gloss on the same old same old. What they really meant was that the economy will boom only once we get rid of the Islamic atheist Kenyan socialist, and install someone who will be nice to rich people. They grabbed hold of some research that seemed, if you didn’t read it carefully, to support their complaints, but there was never any question that they would drop the uncertainty thing the moment it became inconvenient for their real goals. And so they did.

It’s a lot like the austerity debate, where it was obvious all along that all the carping on debt was really a way to go after the welfare state — a point demonstrated forcefully by the hostile reaction of people like Olli Rehn when the French began reducing their deficit by raising taxes rather than slashing benefits.

We're going to hear a lot about that during the CR debate. The teabaggers will claim that they have to ruin the economy in order to save it.
posted: 12:44 PM