(This blog occasionally publishes non-political posts on the weekends.)

Baltimore buses always attract a colorful clientele, but few passengers have made an impression similar to that left by The Old Guy In the Trilby Hat. Call him "Mr. TOGITH."

This man stood out for several reasons. He wore a trilby hat similar to the one Sean Connery wore in that Indiana Jones movie. (Did you know that that both the trilby and the fedora were named after two leading female characters in popular plays?) TOGITH also sported a natty dark brown overcoat of an unusual cut -- and a scraggly beard. A beard much like my own.

Which brings us to the two most noteworthy aspects of this gentleman:

1. He looked like me. Or rather, he looked the way I might look twenty or thirty years from now.

2. He kept staring at me, as if in recognition.

He left his seat, stood near me, looked right at me, and starting talking. At least, he moved his lips: No sounds came out.

His gesticulations, combined with the worried expression on his face, suggested that he was attempting to issue some sort of warning. As you might imagine, this bizarre scene caused me no small amount of discomfort, and I was grateful when the old man finally stepped off the bus. Even as he walked out the back door, he stared at me while screaming silently.

Well. That was odd.

As it happens, I was on the bus that day because I had to meet someone downtown. Being quite early for this appointment, I decided to kill some time by popping into a thrift store. For all of my caterwauling about Bawlmer, this wretched city has one supreme virtue: The thrift stores are excellent. They practically give away fine men's furnishings. Having become quite spoiled, I now buy only Brooks Brothers, Kenneth Cole and Jos. A. Bank. At two or three dollars an item, why settle?

Deep inside the confines of this particular store, I made a remarkable discovery. No, I'm not talking about the tweed coat or the Navy blazer. I'm talking about...the trilby hat.

In a sudden moment of samsara, the truth of the matter flashed into my consciousness. That old man on the bus -- Mr. TOGITH -- was Future Me. The eldritch time travel device which sent him back to 2013 could only transmit his image. (That, is my image.) Although the visual aspect came through with vivid realism, the audio remained trapped in the future.

In the year 2040-something, a group of scientists will look into their plexiglass Time Cubicle, and they'll see...nothing. The old man they sent back in time will have disappeared. The cubicle will be empty. But they'll hear the voice of Mr. TOGITH (a.k.a., my future self) as he cries out desperately:

"For God's sake, don't go to that store! The fate of the world depends on it! You'll doom us all! You have no idea what you're dealing with. You'll unleash dark forces that you cannot begin to comprehend. Whatever you do -- DON'T BUY THE HAT! DON'T BUY THE HAT!"

I bought the hat anyways. Ain't I a stinker? 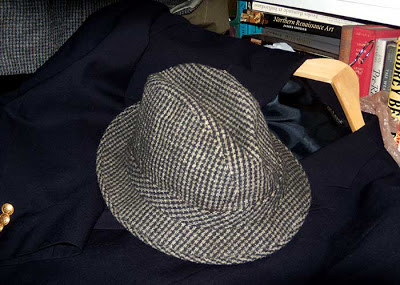