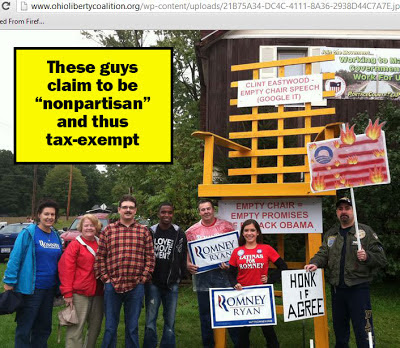 The NYT hammers home a point which I've whispered in previous posts: The real IRS scandal isn't the fact that "Tea Party" was used as a keyword. The scandal is why those groups are allowed to maintain their tax-exempt status as (quote) "social welfare organizations" (unquote), despite being flagrantly partisan.

Let us repeat a few too-seldom heard points: No right-wing group has actually lost its tax-exempt status. The only group which got kicked out of 501-c(4) land was a liberal organization in Maine. The keywords "Tea Party" and "patriot" applied to only about one-third of the groups whose tax-exempt status came under IRS review -- a distribution which strikes me as perfectly fair, since the teabaggers appeal to roughly one-third of the population.

We should thank the NYT for delving into the specifics...


When CVFC, a conservative veterans’ group in California, applied for tax-exempt status with the Internal Revenue Service, its biggest expenditure that year was several thousand dollars in radio ads backing a Republican candidate for Congress.

The Wetumpka Tea Party, from Alabama, sponsored training for a get-out-the-vote initiative dedicated to the “defeat of President Barack Obama” while the I.R.S. was weighing its application.

And the head of the Ohio Liberty Coalition, whose application languished with the I.R.S. for more than two years, sent out e-mails to members about Mitt Romney campaign events and organized members to distribute Mr. Romney’s presidential campaign literature.

Representatives of these organizations have cried foul in recent weeks about their treatment by the I.R.S., saying they were among dozens of conservative groups unfairly targeted by the agency, harassed with inappropriate questionnaires and put off for months or years as the agency delayed decisions on their applications.

But a close examination of these groups and others reveals an array of election activities that tax experts and former I.R.S. officials said would provide a legitimate basis for flagging them for closer review.


At least some of the conservative groups that are complaining about I.R.S. treatment were clearly involved in election activities on behalf of Republicans or against Democrats...

You'd think that the conservatives would prefer to play it quiet when it comes to such an obvious scam. So why did they whip up this pseudo-scandal? In part because they'll use any stick to beat Obama, and in part because they hope to protect the use of these extremely partisan "non-partisan" groups in the 2014 elections.

The stakes are high for both the I.R.S. and lawmakers in Congress, whose election fortunes next year will hinge in no small part on a flood of political spending by such advocacy groups. They are often favored by strategists and donors not for the tax benefits — they typically not do have significant income subject to tax — but because they do not have to reveal their donors, allowing them to pour hundreds of millions of dollars into elections without disclosing where the money came from.

The I.R.S. is already separately reviewing roughly 300 tax-exempt groups that may have engaged in improper campaign activity in past years, according to agency planning documents. Some election lawyers said they believed a wave of lawsuits against the I.R.S. and intensifying Congressional criticism of its handling of applications were intended in part to derail those audits, giving political nonprofit organizations a freer hand during the 2014 campaign.

No More Mister Nice Blog has published photos depicting these "non-partisan" tax-exempt folks doing their thing. I've borrowed one of those images for this post. The real scandal is that the IRS has been too gutless to go after these liars.

Time to go on the offensive. Time to shout boldly: Tea Party groups should NOT be tax-exempt. Tell the IRS to hit 'em hard!
posted: 1:23 PM