Two videos: The first contains an interview with an eyewitness to the arrest of...well, someone. A number of You Tube comments aver that Naked Guy (if I may bestow that name on him) was, in fact, the driver of the carjacked vehicle. Others say that Naked Guy and Tamerlan Tsarnaev are one and the same.

If he was Tamerlan, then we need to account for the condition of the body photographed in the morgue. Especially those bullet holes. Judge for yourself:

And here is a clearer video of the naked guy. He does look like Tamerlan, who was a boxer and thus in good shape.

Just for reference, here's a shot of Tamerlan in the ring. 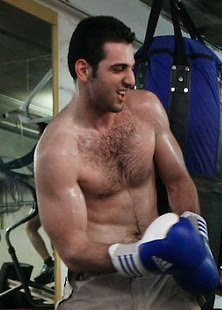 Seems to me that, although Tamerlan and Naked Guy look much alike, Tamerlan had more chest hair. On the other hand, the video is not as detailed as we might like.

So...was Naked Guy the driver of the hijacked vehicle, as many claim? I don't think so.

On that day, journalists covering the rapidly breaking series of events made one point quite clear: The driver of the hijacked car was let go well before the brothers drove into Watertown. The map published here indicates that the driver was let go at a gas station some three miles to the east of the site where Naked Guy was arrested. 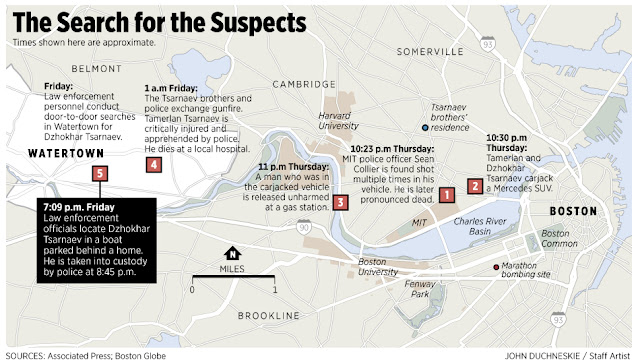 Moving away from the mystery of Naked Guy, we have this Buzzfeed article from the 19th:


Tamerlan Tsarnaev was fatally shot when he ran toward Watertown police officers and attempted to set off an IED that was strapped to his chest. He died soon after he arrived at Beth Israel-Deaconess Medical Center.

Buzzfeed links to this NBC report published that same night. That report gives us testimony from a neighbor named Andrew Kitzenberg, who was a direct eyewitness with a fairly close view:


The dead suspect — the man in the black hat from the FBI photos — had an improvised explosive device strapped to his chest, law enforcement officials said.

Kitzenberg said that the firefight ended when one of the shooters ran toward the Watertown officers and ultimately fell to the ground. Kitzenberg said he could not tell whether the man was tackled or had been shot.

The other drove the SUV through a line of police offcers at the end of the street, he said. A bullet from the gunbattle lodged in the wall of Kitzenberg’s apartment, he said.


So here, in this early account, we have the claim that the SUV zoomed into a group of cops, although we do not have the assertion that one brother deliberately struck another. Although I don't know Kitzenberg's exact viewing location, it's a little difficult to believe that he was able to see the suspect lying on the ground yet somehow missed seeing the same guy being hit by an SUV. Perhaps some enterprising journalist can ask Mr. Kitzenberg for a follow-up interview...?

Finally, the Boston Herald carried a follow-up interview with Dr. Richard Wolfe, who worked on Tamerlan:


“Our thought was ... there had been a blast injury with shrapnel,” Wolfe said.

When asked about reports that Tsarnaev was run over by a vehicle driven by his fleeing brother, Dzhokhar Tsarnaev, Wolfe said he did not see any obvious injuries that would back up that theory.

“I certainly did not see any tire marks or the usual things we see with someone run over by a car,” he said.


Our questions now: How did Tamerlan die? Who was Naked Guy? And if the Watertown police chief is right about one brother running down the other, why does the body have bullet holes (as evidenced by the photo and the doctor's testimony)?
posted: 9:29 PM