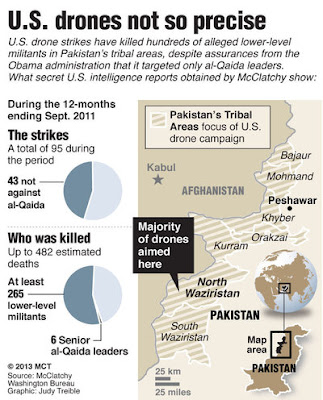 A few days ago, Daily Tech published a must-read article, in which Jason Blick offers the latest on Obama's drone killing program. Of course, you already know this stuff if you've been reading Marcy Wheeler, but there's a special amusement to be found in Blick's attempt to present the outrageous new revelations in a value-neutral, he-said-she-said fashion.

The bottom line, of course, is that only a tiny, tiny portion of those killed were members of al-Qaeda.


One major complaint of the administration's critics is lack of transparency in the deadly offensive. The administration has refused to release a list of "terrorist" organizations that it considers "associated forces" of al-Qaeda. So far only Afghanistan's Taliban has been officially acknowledged as an al-Qaeda ally. Also not revealed was whether the administration conducted so-called "signature killings" -- killings of locals who met with al-Qaeda or exhibited other behavior deemed suspicious.

New CIA chief John Brennan in February acknowledged that the drone strikes sometimes miss the mark and kill innocent civilians, but he defended the program saying the U.S. paid the families of people it accidentally killed. He commented, "Where possible, we also work with local governments to gather facts, and, if appropriate, provide condolence payments to families of those killed."

I'm trying to think of a film director who could accurately capture the mixture of horror and absurdity on display here. We need a combination of Jodorowsky and Kubrick.

In August 2012, a drone strike in Yemen killed a 40-year-old moderate cleric Salem bin Ahmed bin Ali Jaber just two days after he delivered a speech denouncing al-Qaeda. The irony is that the al-Qaeda officers who were targeted in the strike, reportedly came into town to threaten Mr. Jaber for his support of the U.S. and pacifistic leanings.

But for true surrealism, run your eyes over the following combination of image and text (and I honestly have no idea as to whether the humor was deliberate): 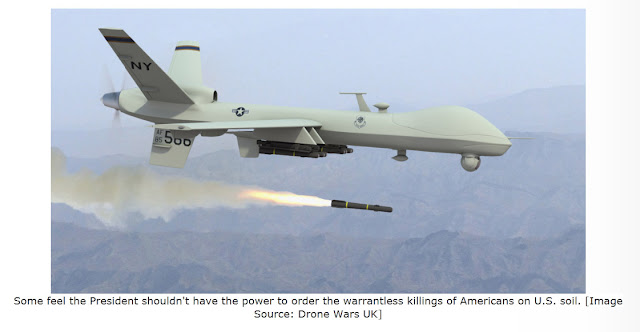 Yes, these points are controversial. But that's the way at least some feel.
posted: 2:10 PM