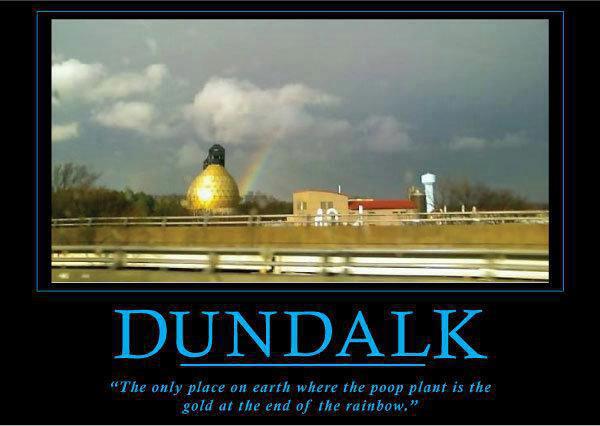 From the Urban dictionary, this definition of Dundalk:


...a rotting cesspool on the Eastern side of Baltimore County, Maryland (known to those in Dundalk as "Merr-land"). Sandwiched between a sewage treatment center aka the shit plant and a disgusting town called Highlandtown, Dundalk houses some of the most vile Maryland residents. Women there often boast between 6-12 teeth, hair that is at least 3 shades and copious amounts of 5$ tattoos. They have 6 kids each, with approximately 2-3 fathers, of which 1 is known. The species known as the Dundalk male frequently wear shorts that end only 2 inches from their white Reebok classics, with an Ecko shirt that they spent their entire paycheck on. Even though they have their hair shaved to a 1 they use a half a bottle of Dep gel and brag about the silver chain they bought at the North Point Flea Market.

Popular Dundalk hang outs are the Zu and Howards Pub, which on any given night, entertain you with some of Dundalks finest getting into brawls over mistaken facial expressions or a Dundalk whore showing up to the bar with her new babydaddy to make 3 or 4 other babydaddies jealous.

Devoid of good dental and linguistics but full of leg-spreading sluts and exciting new STD's, Dundalk is a place you never want to experience.


This is true for much of the rest of Balmer. I've never once heard a young woman refer to her husband or boyfriend; they always talk about "muh baby's daddy."


Hooked up Civics with "fart mufflers" reign supreme on the streets.

The girls are known for getting pregnant by the age of 14 and having 2 kids by age 17. Bottom line people, along with Essex it is the arm pit of BalCo.

Not only have I eaten in this restaurant, I've dined at this exact table. (But in the above video, I think the culprit was actually booze.)

Let's end this investigation of Baltimoronism by tying it into the thornier question of racial relations.

Most of the young (and not-so-young) white women in this lower-class Bawlmer suburb have babies born of an interracial union. These women may not have husbands, but they do have the babies. In this town, I have never seen a single baby or toddler born of two white parents or two black parents.

Everyone comments on this situation. It's a local joke.

For quite a while, I've been castigating myself just for noticing the local demographics. Back in CA, interracial dating never bothered me; in fact, I've gone out with a black girl myself. I've often jokingly told people that America could solve half her problems if we made interracial marriage mandatory. So why does the eastern sector of Baltimore bug me...?

Then it hit me: How would I feel if I were a young black female living in this ghastly burg? The young African American women here are never seen pushing strollers. These women can't feel very desirable or valued.

Yet most of the truly attractive females in this town tend to be black -- some of them look like fashion models. With few exceptions, the white women range from homely to, well, much-worse-than-homely. If I were younger and unattached, I know which ladies I'd be most likely to ask out.

So. Does the fact that I noticed this trend indicate some residual racism in my own soul? Or are the fathers of those children the true racists?
posted: 8:32 PM