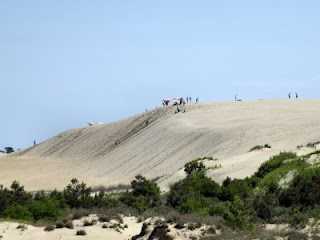 Some of you may know the story of Nag's Head, North Carolina. Now a popular vacation spot, this beach community got its name from the practices of the "land pirates" who lived here in the 18th century. The pirates called themselves "bankers" because they had devised a novel use for a tall sand bank, or dune, now known as Jockey's Ridge.

On stormy nights, the bankers would hobble an old horse, hang a lantern around the poor beast's head, and walk him across the top of the dune. (Hence the names "Nag's Head" and "Jockey's Ridge.") The lantern was visible far out at sea.

Sailors aboard nearby ships would see the light and conclude that it belonged to another ship safely moored in a harbor. The position of the horse atop that bank gave the wrong impression of the distance to shore. Many a captain took the bait and headed toward the bobbing light -- coming to grief on the rocky shoals of Nag's Head, which some call "the graveyard of the Atlantic."

The bankers would then raid the disabled ship, kill everyone on board, and steal everything. The bankers did not care about human life. Their sole thought was for acquisition.

This story teaches us an important truth about human nature: Without law, people will show their truest selves. We are barbarians. We are killers. We are worse than beasts.

Hence the need for regulations.

Make no mistake: The bankers are still with us, still luring in the unwary, still using promises of safe harbor to fool the humble into catastrophic decisions. A certain notorious street in New York provides a haven for the most bloodthirsty bankers ever to assail humankind.

Today's bankers have many horses. One of those nags has recently identified himself: Scott Brown.

I'm sure he'll enjoy his rewards -- the bucket of oats, the occasional carrot. Obviously, he likes to be mounted. And he doesn't mind wearing the lantern.
posted: 8:11 AM