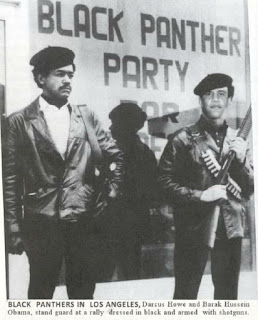 Some unknown prankster even put together a Photoshop job portraying Barack Obama as a member of the original Panthers; Snopes offers a debunking here. The original photo (featuring Huey Newton and Bobby Seale) was taken in the late 1960s, at a time when Barack Obama was a child.

We all know that popular conspiracy memes never die. We may thus presume that many citizens will spend the rest of their silly little lives believing that Barack Obama joined either the new or the old manifestation of the Black Panthers.

But non-denizens of Fantasyland may want to consider a few words that an actual Panther alumnus, Larry Pinkney, has written about our current president. His text will leave many Cannonfire readers nodding in assent.


It is now February 2013, and Common Dreams reports that Barack Obama has repeatedly demonstrated that he is the draconian 'Kill List,' drone missile, “war criminal” president of the United States. For these past years there has been, and continues to be, “no peace or justice under [the] Obama presidency.” The misleaders of the everyday people knew full well, or should have known, back in the years 2007 and 2008 that Barack Obama represented the systemic interests of the U.S. corporate/military power elite – not those of everyday Black, White, Brown, Red, and Yellow people. There was a wealth of information available (even in 2007 and 2008) that showed that Barack Obama was substantively no different from his predecessors in the White House – but the partisan 'progressive' and 'leftist' misleaders of the people chose to ignore it. Indeed, Barack Obama on his third day in office as U.S. president (in his first term), began slamming down predator drone missiles upon the people of Pakistan. Now, in 2013, Obama's blood-baths and systemic terror have only grown and intensified.

Moreover, these misleaders chose to ignore common sense, which indicated in 2007 and 2008 that (then aspiring U.S. presidential candidate Barack Obama) would never have received the overwhelming support that he did from the U.S. corporate-stream media if he was not already a well-honed, Trojan Horse tool on behalf of the corporate/military elite of this political system. Furthermore, a significant portion of the so-called 'alternative' media also played an insidious role in bringing the U.S. Constitution-destroying, drone missile loving, war mongering, Barack Obama to political power in this nation.


That many Democratic partisans and fervent Obama admirers are vapid unprincipled hacks willing to justify anything and everything when embraced by Obama – including exactly that which they pretended to oppose under George W. Bush – has also been clear for many years...

I think Pinkney takes things too far, but not by very much. My own opposition to Obama (from a liberal stance) throughout 2008 is a matter of record. I did reluctantly support him in 2012, if only because it was so very easy to "fall in hate" with Mitt Romney. Besides, one must consider the Supreme Court.

Nevertheless, I have spoken out repeatedly about the drone scandal, and shall continue to do so.

That said, we must also confess that opposing Obama's policies (and not just his "death-from-above" policies) from a liberal perspective requires both care and dexterity. One must also oppose those who toss mud at the President from stage right. Pinkney's criticisms, though overheated, have a basis in fact. By contrast, the Breitbarters, the Gellerites and their ideological co-religionists routinely trade in fantasy -- as anyone can prove by hitting the links given in this post's second paragraph.

It isn't always easy to castigate a President who is also castigated (for the wrong reasons) by the most diseased sectors of our body politic.

About that Common Dreams piece: It's about Cornel West, formerly a noted Obama supporter.


Philosophy professor, social critic and activist Cornel West says that like Richard Nixon and George W. Bush, there is no way to avoid the conclusion that President Obama—due to his execution of foreign wars and direction of clandestine military operations overseas resulting in the direct and foreseeable death of innocent people—should be called out for what he is: a 'war criminal'.

Appearing on Tavis Smiley's radio program on Thursday, West said: "We’ve been talking about this for a good while, the immorality of drones, dropping bombs on innocent people. It’s been over 200 children so far. These are war crimes.”

"I think we have to be very honest," he said.


Although you wouldn't know it from the shock and outrage expressed over the last few days, that Barack Obama claims the power to order US citizens assassinated without charges has been known for three full years. It was first reported more or less in passing in January, 2010 by the Washington Post's Dana Priest, and then confirmed and elaborated on by both the New York Times and the Washington Post in April, 2010. Obama first tried to kill US citizen Anwar Awlaki in December 2009 (apparently before these justifying legal memoranda were concocted) using cruise missiles and cluster bombs; they missed Awlaki but killed 52 people, more than half of whom were women and children.

Back in February, 2008, Paul Krugman warned that Obama supporters are "dangerously close to becoming a cult of personality."

Boy, do I remember that.


...polls now show that Democrats and even self-identified progressives support policies that they once pretended to loathe now that it is Obama rather than Bush embracing them. On MSNBC, Obama aides and pundit-supporters now do their best Sarah Palin impression by mocking as weaklings and losers those who think the President should be constrained in his militarism and demonizing as anti-American anyone who questions the military (in between debating whether Obama should be elevated onto Mount Rushmore or given his own monument). A whole slew of policies that would have triggered the shrillest of progressive condemnations under Bush - waging war after Congress votes against authorizing it, the unprecedented persecution and even torturing of whistleblowers, literally re-writing FOIA to conceal evidence of torture, codifying indefinite detention on US soil - are justified or, at best, ignored.

Electoral politics played no small role in the rationalization process. The unhappy prospect of saying the words "President Romney" forced many liberals to squelch their critiques of Barack Obama. But the election is over, and we must now speak forcefully.