This post is a follow-up to the one below.

Although most Americans aren't paying much attention to the Syrian rebellion, that situation will change if the following conditions are met:

1. The insurgents topple the Assad dynasty.

2. The new government is fundamentalist and harshly repressive, especially toward Syria's Christian community.

3. The new government offers any support (even if purely verbal) to jihad.

If and when those things happen, the conservative media will -- with some justification -- screech about how Obama "lost" Syria and helped an Al Qaeda-linked group attain power. The president will have handed his foes a propaganda coup roughly equivalent to Benghazi times infinity. Fox News will call for congressional investigations while the Breitbarters will scream that Obama aided jihadis because he's a secret Mooooslim. Sharia law in America! The caliphate's a-coming! Yada yada yada; you know the drill.

Right now, American conservative opinion on Syria is vague and contradictory, with neocons calling for direct intervention while classic libertarians call for caution or noninterference. But if Assad falls and Mr. Even-Worse takes his place, today's interventionist neocons will not hesitate to use Syria in its perpetual game of pin-the-blame-on-the-Dems. 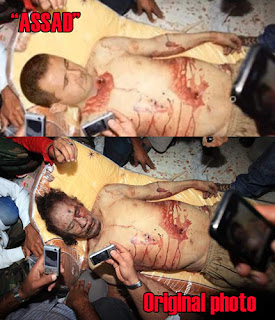 Make no mistake: A good part of the blame should be pinned to that ass -- but only part. Much blame goes elsewhere. It's pretty obvious that America has been pressured into action by our friends in Israel.

One strange indicator of covert Israeli activity on behalf of the rebellion is the "Assad-is-dead" ploy. You may have noticed that the less-selective right-wing sites have published "scoops" indicating that Assad was killed by his bodyguard -- an Iranian bodyguard, no less. (Nice touch, that.) The New York Daily News also fell for this one.

This fake photo of Assad's corpse is a decent bit of Photoshopping. (I've reproduced the fake and the original photo to your left.) A hint of shadow under the head would have helped.

The motive for this disinformation exercise escapes me, but somebody somewhere is playing a very weird trick -- and when I say "someone," I'm talking Mossad. For a rather strong indicator that this yarn is of Israeli origin, see here and here. I don't think that the CIA would plant a silly story of this sort; their "let's try anything" phase ended decades ago. No, this is an Israeli thang; only Israel's spooks could convince themselves that a ruse like this might live longer than 24 hours.

But why'd they do it?

More importantly, is anyone involved with this game thinking more than two moves ahead? I can understand why Israel wants rid of Assad (who, let us be clear, is nobody's idea of an admirable leader). But do they really feel that they'll get a better deal from Nusra, the Al Qaeda-linked group leading the rebellion?

If the Syria regime change turns into a cock-up, it'll be a cock-up with much precedent. It has been said (and not just by Ron Paul) that Israel created Hamas as a counterweight to the PLO. Although the Jewish Federations of North America denies this charge, their explanation may offer some insight into the current situation in Syria:


The PLO was convinced that Israel was helping Hamas in the hope of triggering a civil war. Since Hamas did not engage in terror at first, Israel did not see it as a serious short-term threat, and some Israelis believed the rise of fundamentalism in Gaza would have the beneficial impact of weakening the PLO, and this is what ultimately happened.

(My emphasis.) By "some Israelis" read "Likudniks."

One can cite other examples. In the preceding post, we noted that America supported jihadis when they directed fire at the USSR; later, our fundamentalist "friends" turned out to be less than friendly toward us. Saddam Hussein, Manuel Noriega and Ferdinand Marcos used to be our boys. There is evidence that the CIA helped install Castro.

What continually astonishes me is not the shifting relationships -- "allies today, foes tomorrow" -- because that sort of thing falls under the heading of realpolitik. What bugs the hell out of me is the public reaction. Most average Americans remain ignorant of the way our alliances tend to morph; we prefer linear, melodramatic, easy-to-understand narratives in which today's Bad Guy was always a Bad Guy, just as Oceania has always been at war with Eastasia.

Recall, for example, the events of 1988. When the media instructed the citizenry to hate Panamanian dictator Manuel Noriega, the American people (most of whom had never heard of the guy before) suddenly loathed him with a passion more purple than Pilate's toga. They got downright furious when guys like me tried to tell them that the U.S. had been, until recently, Noriega's sponsor and enabler.

In the same way (and here we return to our opening point), the same neocons who now demand that Obama oust Assad by any means necessary will be the first to blame Obama when Assad leaves and Mr. Even-Worse takes his seat. Propaganda and hypocrisy often share a mattress.
posted: 11:09 AM