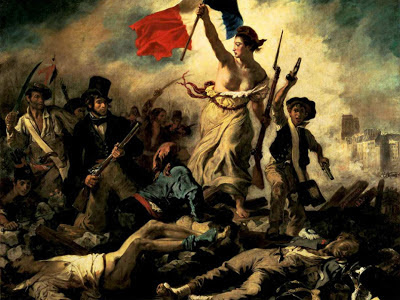 A 28 year-old woman went into a branch of the Louvre and used permanent marker to scrawl "AE 911" on Delacroix's immortal "Liberty Leading the People." The phrase stands for "Architects and Engineers for 9/11." In other words, she's a "controlled demolition" conspiracy freak.

I blame Alex Jones and the Libertarian conspiracy-mongers for this outrage. They are the ones who have spread this diseased notion.

Although there is a false perception that the "controlled demolition" theory was formulated by liberals, a different story emerges if you trace the origins of this pernicious lie. As I have shown in previous posts, the CD theory was created by Libertarians -- who, as we know, are the most conspiracy-addled group in American political life today. The idea was honed by extreme right-wingers such as Christopher Bollyn and Eric Hufschmid. True, there was a period (2004-2006) when this inanity had a certain popularity with young and naive lefties, but the progressive blogs (such as Demoratic Underground and Kos) banished these infants or locked them away in the closet. The most prominent current proponents of this nonsense are Alex Jones, Jeff Rense, and the commenters on Ron Paul's boards -- right-wingers all. 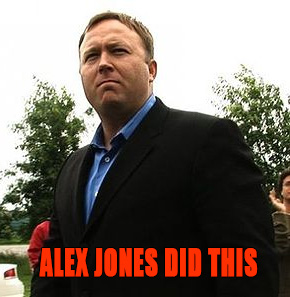 Anyone who believes in the "controlled demolition" theory should be spat upon. These people are monsters. Shun them. Ridicule them. Do not engage them in discussion; do not break bread with them; do not treat them as fellow human beings.

Above all, do not pay them any heed when they claim (as they surely will) that they should not all be judged by the actions of the woman who defaced the Delacroix. Damn right I'm going to judge 'em -- every single one of them -- by her example. The leaders of the "truth" movement have spent more than a decade spewing psychotoxins into the meme-stream. If their efforts have resulted in an outburst of psychotic behavior -- well, what else did you expect?

These "CD" obsessives used to deface this very blog, back in the era before comment moderation. They didn't like what I wrote, so they tried to censor me. In those days -- I'm thinking, in particular, of December of 2006 -- they hit this blog with incessant comment spam, which overloaded the system, making regular posting almost impossible. It was a deliberate attempt to drive me off the net, simply because I had pointed out the flaws in their absurd and anti-scientific arguments.

We all know how these fuckers treated Bill Maher. Frankly, I'm not surprised by what happened in the Louvre.

I believe that a truly great work of art is one of the few things worth more than human life itself. Anyone who defaces such a work is worse than a murderer.

Yes, it may well be possible to remove the unwanted message from the Delacroix. Let me say two things about that:

1. Restoration experts sometimes overestimate their abilities. An example would be Picasso's "La Reve," damaged in 2006 by its current owner, Steve Wynn. Although the restorers proclaimed their repair work to be undetectable, the previous owners of the painting could immediately spot where the harm occurred.

2. Attacks of this sort increase pressure on museums to place their finest works under glass. Even the best glass will result in unwanted reflections and desaturated colors. When placed under glass, a painting becomes more difficult to appreciate -- especially if the work achieves delicate effects through layering and glazing. The public cannot truly see the Mona Lisa nowadays.
posted: 2:34 PM