Did the Tea Party arise spontaneously in 2009? Or was it a long-in-the-works creation of the Koch brothers? This FDL story offers intriguing new evidence...


Shattering the public perception that the Tea Party is a spontaneous popular citizens movement, a new academic paper provides evidence that an organization founded by David and Charles Koch, attempted to launch the Tea Party movement in 2002.

The peer-reviewed study appearing in the academic journal, Tobacco Control and titled, ‘To quarterback behind the scenes, third party efforts’: the tobacco industry and the Tea Party,‘ shows that the group Citizens for a Sound Economy launched a Tea Party movement website, www.usteaparty.com, that went live in 2002.

According to the website DeSmogBlog.com, who broke this story earlier today, CSE was founded in 1984 by the infamous Koch Brothers, David and Charles Koch in 1984. David Koch sat on the board of CSE for many years and the group’s first president, Richard Fink, went on to become a senior VP at Koch Industries.


The 2002 Tea Party website intro screen is reproduced below: 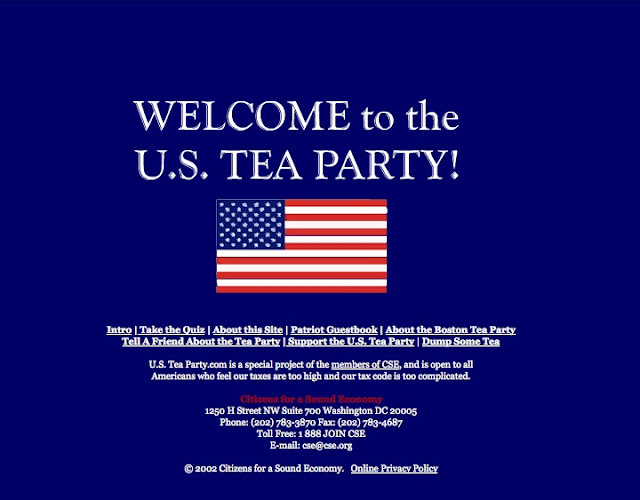 Some will argue that the 2002 Tea Party (which was basically a tool of Big Tobacco) and the 2009 variety were two different operations with the same name. I tend to think that 2009 was entirely planned and stage-managed, using repurposed material first cobbled together years earlier.

Whenever you see an instantly-ubiquitous political phenomenon -- and whenever the thing just reeks of big money and co-ordinated effort -- you know that are dealing with something ersatz. Much of modern politics is the equivalent of wrestling. If you think the drama is real, you're a rube.
posted: 8:11 AM