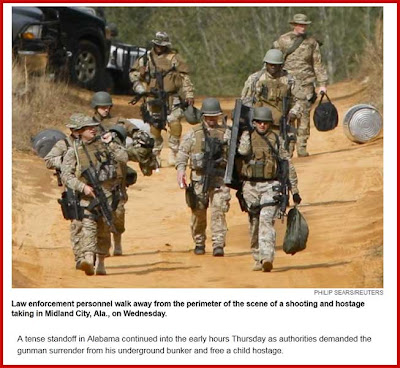 Y'know, not too long ago, most people seeing this juxtaposition of word and image would have presumed that an editor had grabbed the wrong photo. These guys sure don't look like cops to me.

Yesterday, we noted that it's hard to laugh at anti-gummint wingnuts when the authorities do things that make those nuts look not-so-nutty. Here we go again. During the Dubya era, Republicans routinely accused Democrats of treating terrorism as a criminal matter, not as a military matter. That may be a distinction without a difference.

Back in 1994, I saw cops respond to a hostage situation that erupted not many blocks away from my home. Although heavily armed officers swarmed all over the place, the scene didn't look like a frame capture from Platoon.

All of that said, the situation which caused these "cops" to show up  in their Army fatigues is, of course, extremely worrisome and depressing. We've seen a rash of recent incidents in which paranoid men have grabbed guns to commit horrors; a later post may offer summaries of these episodes. For now, consider the paradox: Jimmy Lee Dykes, a "prepper" who (presumably) despises government overreach, has created a situation designed to make his worst nightmare seem to come true.
posted: 2:39 AM