Remember when we discussed the accusation that Israel was one of the (far too numerous) places in this world where the illegal organ trade is a serious problem? When that story hit the Swedish press in 2009, many supporters of Israel screamed that the article had resurrected the infamous "blood libel." Later, Nancy Scheper-Hughes -- who has an unassailable reputation as an investigator of the illegal organ trade (not just in Israel but also in China, Brazil, eastern Europe and elsewhere) -- confirmed the Swedish report. The confirmation came in the form of an interview with Dr Yehuda Hiss, former head of the Abu Kabir forensic institute near Tel Aviv. 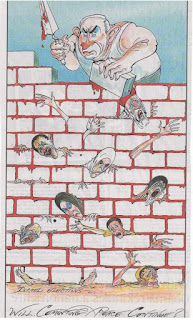 Now we have another instance of the "blood libel" accusation being used in a way that is, in and of itself, libelous.

Gerald Scarfe, a cartoonist for the U.K. Sunday Times (a Murdoch paper) created a drawing Netanyahu using Palestinians as mortar in a new Israeli wall. Those offended by this image claim that Scarfe is guilty of spreading the blood libel.

Of course, many believe that you've got to be very careful when drawing caricatures of individuals who belong to groups that once were (or still are) persecuted. You can go crazy while drawing Khrushchev, but have a care when drawing Idi Amin.

Some of you will recall the time in 2008 when I offered up a few cartoon images of Barack Obama. Even though the portraits were reasonably kind, some Obama supporters would accuse me of racism. In an impressive show of pseudo-outrage, these critics acted as though Evil Racist Cannon had drawn Obama with jet black skin and huge pink lips wrapped around a slice of watermelon, and maybe a bone running through his nose. In fact, I had done no such thing -- but what I actually drew is not what some people saw, or pretended to see. 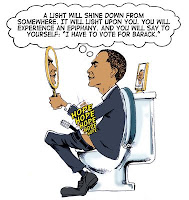 During those heated months, other cartoonists ran into the same problem. Even those bloggers who republished Obama photos taken from slightly unflattering angles would be decried as bigots.

Anyone who enters politics must understand that a cartoonist's job is to make famous people look ugly and foolish.

The whole point of a cartoon is exaggeration. In real life, Netanyahu's nose isn't that large -- but no-one would call his honker petite, and some of the photos I've seen do show some rosacea. So, by the standards of this medium, what Scarfe did is fair. Unflattering, but fair.

Does the image constitute a new version of the "blood libel"? Of course not.


Accepting that the cartoon's target is politics, not race, leads to the inevitable conclusion that Scarfe was not anywhere near committing the offence known as blood libel.

Blood libels are representations of the vile anti-semitic myth that Jews use the blood of children in religious ceremonies and rituals, even cooking it into food.

It is a medieval belief, which perhaps explains why it is so common across sections of the Middle East, but is clearly not one being expressed in the yawnworthy cartoon.

There is no young child being slain by a revoltingly-caricatured Jew, with the blood being used in a warped religious ceremony.

While blood is used as the mortar in Netanyahu's wall, this is obviously portraying a not uncommon view that Palestinian blood is being spilt by the policies of Israel's government.

It is not a difficult distinction to understand.

Equally, Nazi propaganda attacked the Jews as a race - something Scarfe's cartoon evidently does not do at all.


I'll be very amused if someone tries to defend the Danish publication which published cartoons of Mohammed while attacking the Sunday Times for publishing Scarfe.

Let's have a little exactitude of definition. The "blood libel" accusation should be reserved only for those jackasses who actually think that Jews slay children to make matzoh. Believe it or not, such jackasses still exist. Years ago, I ran across a very amateurish video titled (if memory serves) "Jewish Ritual Murder." That thing was screamingly funny. I know that one shouldn't laugh at such a video, because the history behind it is anything but amusing. But the sheer goofiness of the first scene would make even a Golem guffaw: The film shows a snarling, cackling evil rabbi dragging a tyke off into the forest -- and it's all filmed in a style that makes Birdemic look like Citizen Kane.