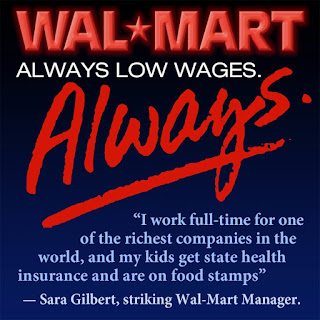 Some of my well-meaning readers slightly misunderstood the course of action discussed in the preceding post.

That piece argues in favor of a boycott of Wal-Mart, Target and other "big box" stores on Thanksgiving. Keeping the stores open on Thursday -- allowing the traditional Black Friday stampede to segue into the preceding day -- means that employees must do without the traditional holiday meal in order to work long, long shifts of ten-to-twelve hours.

If customers abstained from shopping mania on what is supposed to be a patriotic and quasi-religious holiday, those employees could live better lives.

A ONE DAY boycott is all we need.

Alas, too many liberals have seen this situation as an opportunity to proclaim how virtuous they are. Sorry, but this is not a time for you to announce your superiority to the hoi polloi by affirming that you would never shop at the "big box" retail chains. Neither am I talking about such nonsensical prog memes as "Don't Buy Anything Day."

The people who express those sentiments mean well. But that kind of talk alienates the working class. Snooty, condescending and unrealistic prog memes breed the resentment that gave rise to the Fox News empire.

No, all I'm talking about is a simple idea that any All-American prole (like yours truly) can easily understand: Keep Black Friday on Friday.

Thanksgiving is for family and turkey and TV and football and arguments with your cranky Uncle Ed about some unimportant crap that happened twenty years ago. After you gorge, your body will want to doze-n-digest. (The over-indulgence, not the tryptophan, is what makes you sleepy.) Listen to the dictates of your body and keep your growing rump sofa-fied. Don't go out.

Tell your friends, tell your neighbors: Don't go shopping on Thanksgiving. No matter what kind of bargains are on offer, don't go to Wal-Mart. Don't go to Target. Don't go to K-Mart. Stay home.

Anyone who doesn't understand the reasoning behind this one-day boycott should read this supremely insulting comment from Wal-Mart management regarding the strike planned for Black Friday. (Also see here.) Unsurprisingly, Wal-Mart delivered its statement unto the world by way of Fox News:


In a statement to FoxNews.com, Walmart spokesman Dan Fogleman characterized the movement as "another exaggerated publicity campaign aimed at generating headlines to mislead" customers and employees.

Wal-Mart proves, once again, that conspiracy theory is the first refuge of the right-wing scoundrel. The stressed-out employees aren't looking for headlines. They simply want to stay home with their families on Thanksgiving. They don't want to be forced to work all through the night on top of their standard 40-hour daytime shifts.


"We have a great group of associates at Walmart," the statement read. "We’ll have more than one million associates working throughout the holiday weekend and they’re excited about our Black Friday plans this year. This is the Super Bowl for retailers and we’re ready.

"We’ve been working on our Black Friday plans for almost a year now and we’re prepared to have a great event. Our associates care about providing a great customer experience on Black Friday and we’re confident that’s what customers will have at Walmart this year."

How dare they! Wal-Mart management actually has the gall to say that their employees are excited?

I've heard from quite a few people who work for that company, and I can assure you -- every single one of them looks forward to The Event (as management calls it) with dread. Some employees are having a hard time sleeping, because they know that The Event will hit later this week.

These people are not "excited." They're pissed off.

We are talking about ill-paid workers employed by the richest retail company on earth. They're so badly paid that they qualify for food stamps even when they work full time.

All they want is one day off. The same national holiday that their parents and grandparents had off. Many of them don't care about the higher hourly pay. They just want to be with their families.

Thanksgiving is supposed to be a day of remembrance and prayer and patriotism and family togetherness. It is not a day for manic shopping.

If you shop for unnecessary crap on Thanksgiving -- you suck. Plain and simple.

(Now that's the kind of prole-talk the folks in my neighborhood can understand!)

If you get caught up in consumer frenzy on a should-be-sacred holiday, you have no right to criticize the greed of others.

Stop making life hellish for Wal-Mart and Target employees! For JUST ONE DAY -- Thanksgiving -- stay home and eat your goddamn turkey!
posted: 11:09 AM