The more you look into the background of the people behind the inflammatory pseudo-film "Innocence of Muslims," the stranger they seem. I'm not sure what all these links mean, but they deserve note.

"Sam Bacile" has been identified as Nakoula B. Nakoula, a Coptic American convicted of defrauding banks to the tune of nearly $800,000. He was released from the joint in June of 2011 after doing less than a year (even though many people have served longer terms for robbing convenience stores) and immediately started work on the film. Supposedly, Israeli backers gave five million bucks to this crook.

Here's Nakoula's plea agreement. His lawyer is listed as James Henderson. He's a very well-known attorney -- "high powered," as they say. In the 1980s, Henderson headed up an organized crime strike force in Los Angeles.

In 1983, this lawyer became the target of explosive allegations leveled by one "Jerry Vann" -- a.k.a. Gerald Van Hoorelbeke, a federal informant. Vann/Hoorelbeke said that Henderson himself had ties to organized crime, and had covered up bribery of public officials by "Arabs." After an investigation, Henderson was cleared in 1985.

Nevertheless, the FBI continued to use Hoorelbeke as a jailhouse informant. Here's a letter he (allegedly) wrote to FBI head Louis Freeh in February of 2001. In this letter, he says that he learned from Ramsey Yousef that "Bin Laden will use your own planes to take down the W.T.C." Yousef had masterminded the 1993 attack on the World Trade Center; apparently, he shared a cell with Hoorelbeke. (Also see here.)

So how does this link up to Nakoula? Perhaps there is no real link. Perhaps this is all just a coincidence.

On the other hand, Hoorelbeke's prediction about Bin Laden and the WTC attack proved to be quite accurate. Maybe his information about James Henderson was accurate as well. So the question becomes: Why did Mr. Nakoula choose Mr. Henderson, and how did Nakoula afford his services? (Much of the foregoing derives from an insightful bit of research here.)

Come to think of it, nobody has answered another very basic question. What did Mr. Nakoula do for bread and cheese money? When not defrauding banks, that is...

When Nakoula's anti-Muslim movie was filmed, the script did not mention Muhammed and bore the title "Desert Warrior." An actress involved with the production, Cindy Lee Garcia, has come forward to denounce the thirteen minute segment of the film that appeared on YouTube. She also provided a copy of the original casting call, which offers a clue as to another shady individual involved with this bizarre production. Interested parties were directed to contact this email address: desertwarrior@jimmyisrael.com.

Believe it or not, there really is a person in Hollywood who calls himself Jimmy Israel. You can write to him at jimmy@jimmyisrael.com and literaryscreenplays@jimmyisrael.com. Here's his webpage.

Even though he's trolling for screenplays, he advertises himself as running -- you guessed it -- a real estate company. Actually, he refers to his company as a group of "financer/investors."

As you may recall, "Sam Bacile" originally claimed to be in the real estate business. So now I'm wondering: Is "Sam Bacile" a pseudonym for Nakoula Nakoula or Jimmy Israel -- or both? Perhaps Nakoula worked with Jimmy in the same office...

Jimmy also runs a seminar program/multi-level marketing scheme called Nouveau Riche. Here's his spiel. To my eyes, this thing has scam written all over it. In fact, nothing about this guy's web site feels legit. I'm getting a definite "Brent Wilkes" vibe from this guy.

Israel's partner in the Nouveau Riche scheme -- which has apparently given rise to a lawsuit -- is a fellow named Jim Piccolo. (I'm not making up these names, honest!) The guy apparently makes his living selling various get-rich-quick "opportunities."

Everything about this crew reeks of con-artistry and possible criminality -- well, actual criminality in the case of Nakoula. Nothing about these guys suggests that they are motivated by religion or a sincere desire to help the Copts of Egypt.

Steve Klein, on the other hand, is the real deal -- a genuine zealot and a right-wing "patriot." As you may recall, this former marine partnered up with Nakoula for the production of this film. Klein, who has given paramilitary training to his "church" group, is a vocal opponent of Islam, Mormonism, the Jehovah's Witnesses and any other form of religion that does not tally with his own preconceptions.

Perhaps we should not be surprised to learn that Klein considers Cromwell his hero!

Klein's partner in anti-Islamic action is a man named James Horn, who calls himself a former CIA operative. In a blurb for his book Experiencing Islam ("Censored by the CIA!"), Horn says:

Experiencing Islam is an insightful realpolitik text by a career Foreign Service Officer who has served in Moslem countries, worked as a Security Professional, and wore other hats during his 25-years of service abroad. His vision is 20-20.

Prior to publication, the manuscript for Experiencing Islam was submitted to federal agencies for review. The text was censored (redacted) by the Central Intelligence Agency and the Department of State, with input from DHS, the FBI, and the White House. This censored version retains 99% of its integrity and character.

I don't know if Horn has any association with Nakoula's film, although I wouldn't discount the possibility, given his close association with Klein. (Many thanks to this Kos diarist for bringing our attention to the Horn connection.)

For some reason, Horn frequently mentions that his eyesight is 20-20, which is why I've reproduced his photo on the right. Notice anything interesting...?

I should also note that the after-hours screening of Muslim Innocence at the dumpy Vine Theater in Hollywood appears to have been a provocation of some sort designed to entice -- or excuse -- a terrorist reaction. Klein even wore a disguise for the occasion.

Steve Klein, who said he served as a script consultant, said that he and the producers originally called the movie "Innocence of Bin Laden" in hopes of drawing underground Islamic extremists in the Los Angeles area.

"The movie was only supposed to show in Hollywood," said Klein, who described himself as "an unsophisticated James Bond."

He added, "We passed out fliers at mosques around California where we knew there was a small percentage of terrorists. And the idea was to locate … those folks who believed Osama bin Laden was a great guy and to try to get them to come to the movie."

I've seen no evidence that those fliers actually were passed out. The Islamic community in Los Angeles would undoubtedly have taken note of a film allegedly praising Bin Laden, and would have notified the authorities. It seems more likely to me that the film-makers had planned to stage some sort of terror event.

Incidentally, the version screened on that occasion had not yet been overdubbed with slurs against Mohammed. In the original, the evil "prophet" was named George. George of Egypt. A name that Jay Ward would have adored.

According to the San Gabriel Valley Tribune, a filming permit for Nakoula's production was taken out by a firm called Media For Christ. They filmed at the Blue Cloud Movie Ranch in Santa Clarita (which I've passed by on numerous occasions). Oddly, Media For Christ  -- based in Duarte, California -- has denied any link to the production. However, Steve Klein runs something called "The Way TV" out of the same Duarte offices.

Both Media for Christ and The Way TV are run by Joseph Abdelmasih of Arcadia, who is listed as chief executive officer for both entities, and president of Media for Christ, public records show.

This same person, Joseph Nasrallah Abdelmasih, is a well-known Coptic fanatic whose views are not shared by the Coptic patriarchy in Egypt. Pamela Geller of Atlas Shrugged invited Abdelmasih to speak at an anti-Muslim event. Max Blumenthal reveals that Steve Klein frequently participates in Geller's online activities. As you will recall, the anti-Islamic and pro-Nazi Norwegian mass murderer Anders Breivik cited Geller as an inspiration. Geller, for her part, justified the murders on the grounds that the victims were of mixed race.

Finally, we come to Morris Sadek, the person apparently responsible for dubbing the movie into Arabic and insuring that it received notice in Egypt and Libya. Sadek is a Coptic and an anti-Islam fanatic who claims to speak for the community, even though his views are very much at odds with those of the leaders of his church.

Sadek is a supporter of ACT! for America, which believes that President Obama has embraced the Muslim Brotherhood. The group rallied its supporters last month behind Michelle Bachmann’s anti-Muslim witch hunt against Huma Abedin and others. Here’s Sadek with ACT! For America president Brigitte Gabriel at one of the group’s 2010 events.

Sadek is a man of many interests. He’s a member of these groups, among many others: Islam is of the Devil, Warriors of Christ, and OBAMA IS THE WORST PRESIDENT EVER! Agree?. Sadek is also a fan of the Republican Party, George Bush, Allen West (for president no less!), and number of other Islamophobic, conservative and/or Republican institutions and leaders.

Needless to say, Sadek's actions have endangered the lives of Copts. The Egyptian government stripped Sadek of his citizenship some time ago. Nevertheless, he says that he managed to promote the film on Egyptian television. 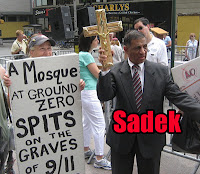 Many people are now saying that "Bacile's" claim of Israeli sponsorship must be false, even though the film itself (what we have of it) is filled with thuddingly obvious Israeli propaganda. Moreover, all of the individuals listed here have strong pro-Israel records. Sedak has made no secret of his own views:

Issued an international lawyer Maurice Sadek National Assembly President Coptic America, new policy statement congratulating Israel on the occasion of "Eid independence", and declares his wishes to be able to "Israel is the liberation of the West Bank and Gaza, the Palestinians and the liberation of Jerusalem from the Arab invaders, to be the united capital of the State of Israel Hebrew!" The statement added, who won the seventh day a copy of it, that "the struggle of Israel is a lesson to the peoples of the oppressed and occupied, so I join the people of Israel the joy and victory, the Arab invaders, and we hope in the continuing struggle in glorious establishment of the State of Israel, and to preserve the existence and continuity, you Jews and the sons of God's chosen people .. you set an example that should be looked at by the people, and your struggle should be a lesson to the oppressed peoples. " The statement condemned the Palestinians, accusing them of killing Christians in Gaza, said: "The Islamists emptied the Arab Christian population in the land of Israel, including, especially after the Muslim Brotherhood (Hamas) of killing Christians in Gaza."

He goes on and on like that. Lovely, innit?

Incidentally, his National American Coptic Assembly is not so grand as it may seem: It has a staff of two. (Amusingly, it is located not far from CIA HQ.) Sadek now claims to be very, very sorry that the film he promoted led to deadly riots -- as if that was not his only intent all along.

It now seems that Anders Breivik offered our initial glimpse into a very strange world. Within that world, you'll find several crooks and opportunists, motivated only by money -- and, perhaps, the threat of prison. But you will also find plenty of zealots motivated by racial and religious hatred. Willingly or otherwise, these people all serve a bloody agenda. These people want war.
posted: 2:44 PM