What a strange sight! My readership stats rose well above normal yesterday, thanks to a link from, of all places, The Daily Kos. Stranger still, the link was embedded in a post written by none other than Markos Moulitsas. Turns out that Kos thinks that Jon Huntsman Sr. snitched to Harry Reid about Mitt Romney's tax situation. He (Moulitsas) was kind enough to link to my earlier post, which fingered Jon Huntsman Jr. 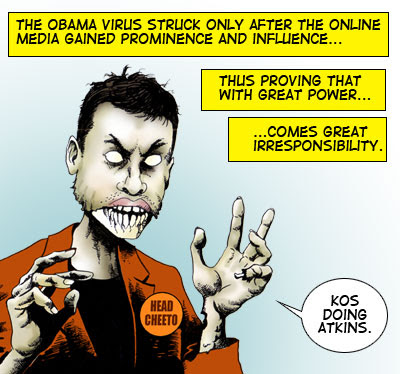 I became extremely annoyed with Moulitsas back in 2008, when, in the throes of the Obama virus, he transformed his site into an every-bit-as-ghastly mirror image of The Free Republic. (If the cartoon to your right confuses you, click on the link above for context. Also see here.) If not for the vile antics of the Kossacks, we might have had a real Democrat as president during the past few years.

That said, I think Moulitsas is much less enamored of Barack Obama these days. His readers certainly seem disillusioned; few of them will vote for Obama, although many will vote against the despicable Romney. For my part, I like Hillary Clinton less than I did before. (She should have stayed in the Senate.) Perhaps we can all agree that both parties have mutated into weird mechanisms designed to keep the best candidates away from the nomination.

That said, I'm grateful for the link. Moulitsas' piece includes one key piece of evidence that gives us even better reason to look at the Huntsman family:


Remember it was a Huntsman daughter who penned an article at HuffPo with Ryan Grim that had sources saying Romney would have never ran if he knew he had to open up his tax filings.

Does the Huntsman family talk Romney's taxes around the dinner table?

The reference goes to this fascinating article by Abby Huntsman and Ryan Grim. Abby Huntsman, born in 1986, is the daughter of the former presidential candidate. She doesn't normally partner up with Grim -- and Grim, in his other work, does not discuss having sources inside Bain Capital. Yet the above-linked piece references such sources. I thus presume (tentatively) that Abby was the one who rang up a couple of Bain head honchos and got them to speak, though not on the record.

Makes sense. Abby's grandfather is a business partner of Robert C. Gay, Bain's financial manager, and her father ran the Huntsman chemical company at a time when they got an influx of money from Bain. She's a well-connected young lady.

Let's look at the HuffPo piece in question...


Mitt Romney has been determined to resist releasing his tax returns at least since his bid for Massachusetts governor in 2002 and has been confident that he will never be forced to do so, several current and former Bain executives tell The Huffington Post. Had he thought otherwise, say the sources based on their longtime understanding of Romney, he never would have gone forward with his run for president.

So...is that it? Is my theory almost sorta kinda proven?

In fact, it has been shot down by Ryan Grim's most recent piece. We now have a named person willing to talk about Reid's source:


"This person is an investor in Bain Capital, a Republican also, and somebody who has been dealing with Romney's company for a long, long time and he has direct knowledge of this," said Reid aide Jose Parra, referring to Romney's tax returns.

Parra teased the details in an interview with Mario Solis-Marich on KTLK’s Diverse LA radio program, according to audio of the show provided by the station.

Reid Chief of Staff David Krone previously described the source to Politico as a successful businessman, and CNN's Dana Bash reported that the source was "credible."

How (you must be asking) do those paragraphs damage the "Huntsman diddit" theory? The damage came in the form of an update:


Parra now says he doesn't know whether Reid's source is Republican. In an email to HuffPost, he wrote:


"I do not know the party affiliation of the source, how long he invested with Bain, or his relationship to Romney beyond the fact that he was an investor with Bain Capital, as Senator Reid has previously stated."

(Emphasis added.) Ah well. That rules out Jon Huntsman the younger -- Abby's dad. Everyone knows that he's a Republican. No-one who works in D.C. could possibly make a mistake about a thing like that.

Markos Moulitsas fingered Jon Huntsman the elder -- Abby's granddad. And God help me, I now think that Kos is right.

It is very conceivable that someone like Parra might presume the elder Huntsman to be a Republican early in the day and then later issue a correction. Most people would automatically assume that Huntsman Sr. favors the GOP, since his son ran for that party's nomination. But, contrary to expectations (and unknown to most people), Reid received fairly hefty campaign donations from Huntsman Sr. -- a fact which Parra may have learned from Harry Reid himself.

The elder Huntsman may well be an independent.

So my theory was wrong. But not, I believe, far wrong.

I now think that Reid spoke to Huntsman Sr. -- who, based on his relationship with Gay, is certainly in a position to know about Mitt's tax hideaways. Gay is the go-to guy for anyone who wants to keep a mountain of money away from the IRS.

In any case, the motivation for bending Reid's ear remains the same: The Huntsman clan can't stand Romney. (It's a Mormon thang.) And Junior now wants Reid's help in securing a position with the World Bank.

By the way, Jon Huntsman is persona non grata at the upcoming Republican convention. That fact seems relevant.

The "Senior" theory makes sense. After all, Reid's source will probably be identified one day. Maybe real soon. Junior would not have "dropped a dime" personally, since he does not want to ruin his shot at the 2016 nomination. Of course, he would have a shot only if the GOP snaps out of its "tea" trance and decides to go moderate.

One final point. Some of my readers may question whether we can call Jon Huntsman Sr. a Bain investor. It's fair to presume that he has received Bain stock, especially now that Bain is trying to get its mitts (so to speak) on Huntsman Corp.
posted: 6:29 AM