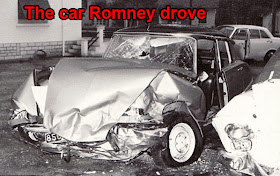 This little-known scandal deserves far more attention than it has so far received.

In 1968, Romney was a Mormon missionary in France, zooming his Citroen through the small town of Bernos-Beaulac, when he slammed headlong into a car driven by a Bishop named Jean Vilnet.

Romney was in a coma for days afterwards, or so he says. (The point has been disputed.) One of his passengers died -- and therein lies a scandal.

For many years, Mitt claimed that the accident killed a drunken priest named Albert Marie, who had caused the collision by swerving at high speed into Romney's lane. That story was not true. The "priest" did not die, was not drunk, was not traveling at high speed, and was not at fault.

For what it's worth, the "priest" was then, and is now, a bishop; his name is not Albert Marie. Although Mitt Romney spoke French well, he apparently didn't understand how nomenclature works in France: The final part of a male first name may be a traditionally female name, attached with a hyphen -- and in religious families, that name is usually Marie. As it happens, the full name of the man Romney hit is Jean-Félix-Albert-Marie Vilnet.

Bishop Vilnet, who was at the Second Vatican Council, is still alive at the age of 90. The injuries he suffered in 1968 were not life threatening. (He drove a very sturdy Mercedes.)

So why would Romney later claim to have killed a priest? He knows full well that he did no such thing.

Moreover, the authorities established that Vilnet was not drunk at the time. 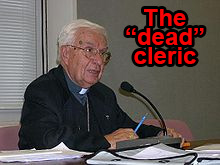 Bishop Vilnet, then 46 years old by American count, was not drunk, not speeding, and not out of his own lane.  He was driving along and Romney hit him. 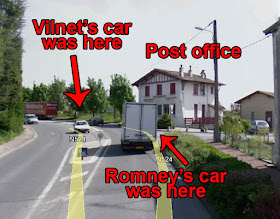 Thanks to Google Earth, we can see the crime scene, which has not changed significantly since 1968. In the above "street view" photo, the truck happens to be in the spot where Romney made his unfathomably sharp turn. Even without the traffic separators, it's hard to imagine how a sober driver could go so severely off course.

Romney claimed that the "priest" was going 120 kilometers per hour on a "mountain road." In fact, the Bishop was either stopped or coming to a stop in a left-hand turn lane.The photo of Vilnet's Mercedes indicates a head-on collision; he was not turning. 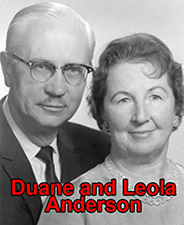 As noted above, someone did die in that crash: A woman named Leola Anderson, a passenger in Romney's overcrowded vehicle. She wore no seat belt. Her family believed Romney's lie about the drunk priest who didn't live to take any questions.

Let that sink in: Romney lied to the children and the husband of a dead woman. (Duane Anderson was seriously injured in the crash. He may have had little idea as to how it happened.) In order to save his own ass, Romney told a whopper to grieving survivors.


Investigation finds an astonishing cover up story. NY Times, Wash Post, Guardian, Boston Globe -- all present closely fit versions of this tale in their archives. Photographs there are mislabeled. Names are incorrect. The initial description of the roadway and the impact are inaccurate. Presidential candidate Mitt Romney asserted in 2007 that the other driver, whom we now know was Bishop Vilnet, was prosecuted.

None of it holds up.

It should be noted that in 1968, Mitt Romney's father, George Romney, had presidential aspirations. True, Nixon had sewn up the nomination by the summer of 1968; however, if the Democrat had prevailed in that year's general election, George Romney would have been considered the likeliest Republican nominee in 1972. (Back then, Reagan seemed too far to the right. Different times!)

Forty years later, other survivors in the car were told by the 2008 Romney campaign not to speak to reporters about what they saw that day. For a full (but somewhat confusing) account of the continuing cover up, see here.

Right-wing apologists attempting to explain away this incident ("Hey, at this late date, who knows what really happened...?") cannot escape one key fact: Bishop Vilnet is still alive, even though Romney said that the man died. There is no possible way Romney could ever have been mistaken on that point. The only possible reason for telling such a lie would be to escape blame for the death of Leola Anderson. Romney hoped to pin the blame on a dead man, even though the man wasn't really dead.

The obvious comparison goes to Chappaquiddick. How many books have been written about Ted Kennedy's accident? Most of those books were filled with lies and half-truths. The worst of the lot is Leo Damore's obnoxious concoction, published (but of course!) by Regnery -- with help from the despicable Lucianne Goldberg.

Yet Kennedy always took full responsibility for the events of that night.

"But that's different!" I can hear some of you saying. "Kennedy was drunk!"

No, he wasn't. No-one who saw him that night claimed that he was inebriated. You've been brainwashed by decades of right-wing propaganda. Unlike Romney, Kennedy drove at night on an unlit road and did not see a turn (unmarked by reflectors or barriers). Everyone on the island knew the turn onto the bridge to be dangerous; residents thought that an accident was just a matter of time.

Romney's accident, by contrast, was just bizarre. Was he drunk when he drove headlong into Bishop Vilnet's Mercedes? I don't know. Given Romney's Mormon heritage, alcohol use seems an unlikely explanation -- but the accident itself remains very strange.

Ted Kennedy manned up: He took full responsibility. He never told a single lie about the tragedy. Mitt Romney, too cowardly to take responsibility, falsely blamed a "dead" cleric.

Kennedy was haunted for the rest of his political life by the ghost of Mary Jo Kopechne. Yet I doubt that anyone will ever ask Mitt Romney why he lied to the family of Leola Anderson. No-one will ask him why he tried to blame a "drunk" priest, who was not drunk and who did not die. If any journalist ever does dare to question Romney about this matter, you know damned well that Fox News and Rush Limbaugh will go into fits of apoplexy. Reporters are allowed to ask such questions only of Democrats.

Conservatives may remake the past; liberals have no such privilege.

For decades, political hit man have screamed about a cover up at Chappaquiddick. There was none. (And please don't think you can take me to school about that incident.) Mitt Romney, however, provably lied about his culpability in the vehicular death of Leola Anderson.

Update: A reader has passed along a link to a NYT story from 2007 that would seem to confirm Romney's version. The writer, Michael Paulson, did the kind of digging I didn't expect, although he is imprecise about sourcing.


The driver of the car that hit Romney, according to an account in a local newspaper at the time, was a 46-year-old man, Albert Marie, from Sireuil. Marie, according to French Mormons who responded to the accident, was a Catholic priest; in an interview this spring, a priest at the parish in Sireuil confirmed that the church's former pastor, now deceased, was Albert Marie. Many of the Mormons familiar with the accident say they believe that the priest was inebriated at the time of the crash but that assertion could not be confirmed.

The priest was traveling with his mother, Marie-Antoinette Marie, and a 48-year-old woman, Marguerite Longué, neither of whom could be located.

Normally, the NYT would cite a specific publication and date, so that's a bit of a red flag right there. Still, I'm impressed by the level of detail. On the other hand, we have an actual photo of the injured Bishop recovering in the hospital, taken around the same time.

Someone is telling a very, very elaborate lie. I'm going to get to the bottom of this. I hope. 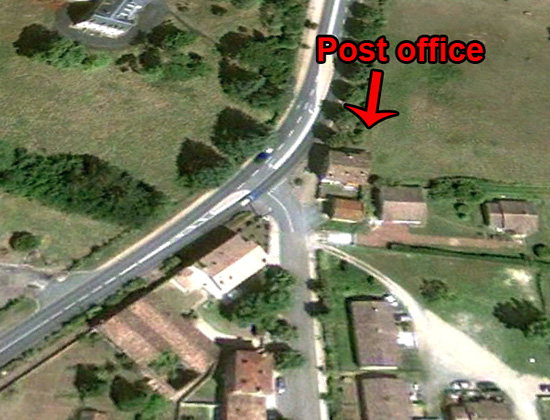 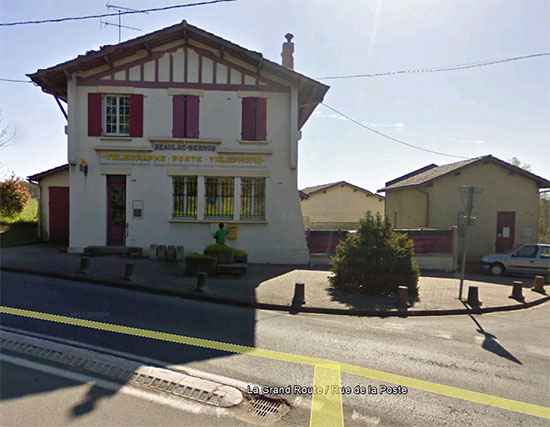