(Update: The theory given here has been slightly revised. After you read this post, read my latest.)

Not long ago, Harry Reid said that a "Bain investor" told him that Mitt Romney won't release his tax returns because he (Romney) went ten years without paying any taxes. This claim, if taken literally, does not seem very credible. Perhaps when the source said that Romney didn't pay any taxes, he meant that the former governor paid an infuriatingly tiny amount. That scenario strikes me as more plausible.

Jon Stewart trashed Reid for making this "unsubstantiated" claim. Stewart then went on to make the very relevant point that the right, which has castigated Reid without mercy, frequently traffics in single-source claims, half-truths and conjectures. Remember Whitewater? Ever tune into Fox News?

Right now, The Hill avers that Reid relishes his role as "attack dog." Really? An attack dog? I never noticed any fangs. The guy looks more like a Basset Hound.

CNN's Dana Bash spoke to someone in Reid's office who confirms that Reid did have a conversation with a "credible" source. Alas, Bash's informant won't reveal the name. But the wording of Bash's report implies that the name is a familiar one.

Bottom line: I think Reid did indeed speak to a source in a position to know. Whether the source told the truth is a different question.

Even if we look at this matter from a strictly Machiavellian standpoint, he had no reason to fib about a fictitious conversation with a fictitious source. Obama is running ahead in the presidential race; there was never any need for a wild maneuver. Nothing Reid has said about Romney has helped the cause of this president or his party. Frankly, I think that the predictable backlash against Reid has hurt the Democrats. If you've alienated Jon Stewart, what good have you done?

So I think that the source is real.

But who is he? Time to whip out the magnifying glass and examine the room for clues.

So far, we've been told only that the source is a "Bain investor" in a position to know something that everyone else in America would dearly love to learn: What's on those hidden tax forms? The number of individuals in that universe must be quite small.

As we try to come up with a name, the following factors strike me as relevant:

1. I think that our source is a Mormon. Why? Because the guy knows about Romney's taxes. It seems likely that Romney might trust only a co-religionist with that kind of information. As we shall see, it is also possible that Reid's source got his info from yet another Mormon -- someone in a position to know all sorts of deep-dish stuff about the Mittster.

2. Reid is a Mormon as well. If the source is a Mormon, he is likely to "go blabby" only when speaking to a fellow Latter-Day Saint. The Mormon community can be insular. In all likelihood, the source would have a history of being on friendly terms with Harry Reid.

3. Why would the source speak to Reid at all? He must have a motive -- an angle. I suspect that we're dealing with someone who was once close to Romney, or at least close to an "insider" at Bain. Later, the source had a falling out with Romney.

As I mull over those three factors, one name comes to my mind: 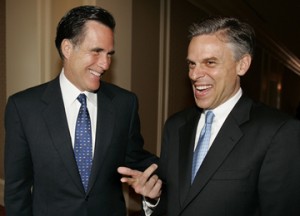 Jon Huntsman. A Mormon. He fits all of our criteria. He's more liberal than Romney. He's willing to work with the other side of the aisle. His name is very familiar -- a factor which, arguably, ties in with the Bash report on CNN.

And one can definitely call him a Bain investor.

The chemical company founded by Huntsman's father (and formerly run by junior) made a $600 million deal with Bain Capital. That deal took place in 2001, the beginning of the "ten year" time period.

Huntsman's father was also a business partner of Robert C. Gay, the Bain managing director whom we have discussed in a previous post. (It may be relevant to note that Gay hails from a prominent Mormon family.)

A Bain buyout would help Huntsman Corp., whose stock price has fallen nearly 30 percent in the past year. It would also be an incredibly useful bit of deal news for political metaphor lovers, since, with enough stretching, it could be said that Mitt Romney was literally buying one of his Republican rivals.

Is this buyout a bridge with bad blood running beneath it? I don't know -- but I would be grateful to hear from anyone who does.

At any rate, I strongly suspect that Robert Gay knows a lot -- and by "a lot," I mean A LOT -- about the creative methods that Romney uses to keep hold of his money. Gay is the guy you would go to if you wanted advice on how to do that sort of thing. Remember, his dad once controlled the Howard Hughes fortune. (William Gay put together the "Mormon mafia" that functioned as Hughes' inner circle.)

One thing is certain: You don't have to Google very strenuously to discover that a Huntsman/Romney feud developed during primary season. From the Salt Lake Tribune, on January 8 of this year:


Huntsman's campaign has sniped at the former Massachusetts governor for flip-flopping, and a pro-Huntsman political action group is airing ads calling him a "chameleon."

Romney, during a debate this weekend, called out Huntsman for serving as U.S. ambassador to China under President Barack Obama. Going tit-for-tat, Huntsman slammed Romney on Sunday for not putting country ahead of politics.

To be fair, the two are distant cousins.


When Romney slammed Huntsman on the China assignment, Huntsman got steamed. See here:


"I put my country first. Apparently Mitt Romney doesn't," he [Huntsman] responded. "He's got this bumper sticker that says ... 'Believe in America.' How can you believe in America when you're not willing to serve America? That's just phony nonsense."

Fire up your search engine. You'll find many more articles indicating that these two Mormons learned to dislike each other on the campaign trail.

Jon Huntsman and Harry Reid are surprisingly close. The Huntsman family donated $25,000 to Reid's campaign. (True, Huntsman the younger has said that he never would donate personally to Reid.) Reid has said some very nice things about Huntsman.


Former Utah governor Jon Huntsman met with Senate Majority Leader Harry Reid (D-Nev.) and discussed the possibility of his being named the head of the World Bank, according to multiple sources familiar with the conversation.

Whether Huntsman urged Reid to push for his appointment or dismissed the idea is a matter of considerable disagreement, however. One Huntsman family friend said that the former governor “fought hard to be named by Obama as head of the World Bank.”

There you have it: A possible motive for Huntsman to backstab Romney. Huntsman probably understands that he has no future in a GOP that has fallen into the clutches of mad tea partiers. (Too bad. If Huntsman were the nominee, he'd be at least ten points ahead of Obama right now.) A prestigious gig at the World Bank would make for a fine consolation prize. Of course, Huntsman can't admit that he wants the job: Look at the political price he paid as a result of the China appointment.

I can guess what some of you are saying right now: "You're speculating again, Cannon!" Okay, sure. A fair cop. But let's face it: Everyone is speculating right now. The many smirky harrumphers telling you "Reid made it all up" are giving you nothing but blue-sky conjecture. It's not as if they know.

If you're a detective, you can't compile a list of suspects unless you're willing to engage in reasonable speculation. Right now, I am convinced that a source does exist, and that Jon Huntsman is our likeliest prospect. (Although now that I think about it, Robert Gay may be another possibility.) Huntsman fits our criteria: He's a Mormon, he's a Bain investor, he likes Reid, and his dad was close to Gay -- who would be in an excellent position to know about the Romney tax situation. And we have motive: Huntsman (probably) would like Reid and Obama to make him the head of the World Bank.

If you have a better answer to the Great Reid Mystery, please share with the rest of the class.

If future World Bank President Jon Huntsman was Reid's source, can we presume that he -- Huntsman -- told the truth? Not necessarily.

This could all be a trick designed to embarrass the Democrats -- an exploding cigar, if you will. It's an old gambit: First you feed false (but seemingly credible) information to an opponent, who goes public with what he thinks he knows. Then you demonstrate, in a very public forum, that what your mark thinks he knows just ain't so. Hilarity ensues. In the parlance of intelligence, such a ploy is called a "double bubble."
posted: 4:33 AM