Arguably, the post you are about to read is irresponsible. Nevertheless, I've been thinking about the possibility that accused "Batman" killer James Holmes has warped his mind by dabbling in hypnosis.

I keep mulling over the ABC News report of a video featuring James, then 18, as he discusses his interest in science:


In the video, he is standing among his peers at a science camp held at Miramar College in San Diego talking about "temporal illusions."

"Over the course of the summer I've been working with a temporal illusion. It's an illusion that allows you to change the past," Holmes said in the video.

This is how he was explaining his mentor's shared interest in fantasy versus reality in the video: "He also studies subjective experience, which is what takes places inside the mind as opposed to the external world. I've carried on his work in dealing with subjective experience."

The ABC New report is badly written. It does not identify this "mentor."

(Update: The mentor has now been identified. See below.)

Whoever he is, his recommendation must have had some pull -- because this bizarre interest in changing the past earned Holmes a major federal grant to study neuroscience at a highly competitive institution. I've heard that fewer than ten students each year get such a grant.

To the best of my knowledge, the only scientist who ever tried to do what Holmes proposed to do was a famous hypnosis researcher named Milton Erickson. 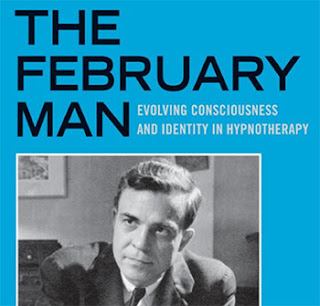 Many years ago, while wandering without aim through a college library, I ran across a fascinating book by Erickson called The February Man. In short and in sum, that book discusses a technique of using hypnosis to create the illusion of a past that never actually occurred.

Although copies of the book are now rare and expensive, a summary may be found here. I'm afraid that the precis does not do the book justice.

Basically, Erickson was dealing with a young woman who needed to change her self-destructive behavior. As the saying goes, "the child is father to man." Thus, the hypnotherapist reasoned that changing the subject's past -- through hypnotic regression -- could change her present.


In the third interview Erickson spends five hours training her in hypnotic responsiveness. He regresses her to various ages and neutral memories, including their first interview, into which he "interpolates" a brief hypnotic episode that did not occur in the actual interview...

When Erickson has established various regressions as a "general background for new, interpolated behavioral experiences" he rouses her "somnambulistically in this regressed state." Erickson defines somnambulistic trance as "a form of hypnotic behavior always significant of a deep trance state. In this condition subjects behave and respond as if they were wide awake and may even deceive observers with their seeming wakefulness." In her wide-awake four-year-old state, he begins to talk to her and identifies himself as a friend of her daddy's. After each episode of meeting Erickson while regressed, she is instructed to sleep hypnotically, then roused with the wrist cue for another meeting with him at a different age. Finally, she receives "extensive posthypnotic instructions to ensure a comprehensive amnesia for all trance experiences" and the session ends.

In subsequent sessions, "usually of several hours' duration," Erickson carefully interpolates himself into her regressed memories, offering perspective and "friendship, sympathy, interest, and objectivity, thereby giving him the opportunity to raise questions concerning how she might later evaluate a given experience." "The consistent and continual rejection she experienced from her mother presented many opportunities to reorganize her emotions and understanding." He offers therapeutic reframes of traumatic events (she will be able to remember her childhood grief over a broken china doll when she herself is a mother, and will be able to understand when her own daughter is sad), perspective (a teenage humiliation will one day be looked on as amusing), and weaves real happy memories in with the February Man episodes to insure integration.

Erickson called himself "the February Man" because he visited the subject during every February of her life.

The basic idea here is that all we retain of our past is our memory of it. By using hypnosis to alter those memories, we can recreate who we are today. By changing the past, we can change our identity.

Was Holmes proposing to carry on Erickson's work? I don't know -- but at the moment, that's the only sensible interpretation I can offer for Holmes' words in that video. Under normal circumstances, a student isn't likely to get any major grants if he blathers on about "temporal illusions." Even the SyFy channel wouldn't consider that kind of thing to be scientific. The money will come only if the student can cite respected previous work.

Within the field of hypnotherapy, Erickson was a giant; his name still carries great weight. Thus, I wonder if this mysterious "mentor" had introduced the bright youngster to the work of Milton Erickson, or perhaps to the work of a hypnotherapist who did similar research. If so -- and if Holmes decided to carry out his own studies -- he probably would have used himself as a subject.

It is common for a hypnotherapist to use imagery drawn from popular culture.

Update: A friend to this blog informs me that the mentor has been identified. From her comment:


This is interesting. The guy that's listed as Holmes' mentor in that "temporal illusions" video, John Jacobson, repudiates the idea that Holmes was "brilliant" and says that he all but fired him from the research internship program. He also talks about assigning Holmes the task of writing computer code for a rock-paper-scissors game--no mention of "temporal illusions" at all.

However, in 2002, Jacobson was second author of a paper entitled "Perceived Luminance Depends on Temporal Context"

Although Jacobson may have considered Holmes a mediocrity, you can't bullshit your way into Phi Beta Kappa. The kid must have had something going for him.
posted: 7:01 PM