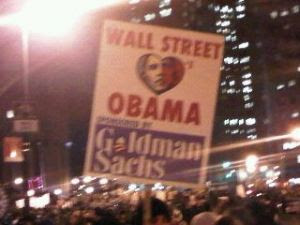 Matt Taibbi has a marvelous piece up on the society-wide hypocrisy that made a massive protest movement inevitable:

Last week, a federal judge in Mississippi sentenced a mother of two named Anita McLemore to three years in federal prison for lying on a government application in order to obtain food stamps.

Compare this court decision to the fraud settlements on Wall Street. Like McLemore, fraud defendants like Citigroup, Goldman Sachs, and Deutsche Bank have "been the beneficiary of government generosity." Goldman got $12.9 billion just through the AIG bailout. Citigroup got $45 billion, plus hundreds of billions in government guarantees.

All of these companies have been repeatedly dragged into court for fraud, and not one individual defendant has ever been forced to give back anything like a significant portion of his ill-gotten gains.

You get busted for drugs in this country, and it turns out you can make yourself ineligible to receive food stamps.

But you can be a serial fraud offender like Citigroup, which has repeatedly been dragged into court for the same offenses and has repeatedly ignored court injunctions to abstain from fraud, and this does not make you ineligible to receive $45 billion in bailouts and other forms of federal assistance.

Skewering OWS: Although the Confluence has reported on what really happened on the OWS Day of Action, CBS was pretty desperate to find some bad news.

In the middle of thousands of protestors yelling and chanting — some kicking and screaming – CBS 2’s Emily Smith found little school kids trying to get to class. Nervous parents led them through the barriers on Wall Street. The NYPD helped funnel the children, anything to ease their fears while some protestors chanted “follow those kids!”

“These guys are terrorists, yelling at little kids,” one father said.

Naturally, the right-wing blogs are all over this. They'll be screaming and yowling about the "child-hating" OWS movement for the next 48 hours, perhaps longer. Example:

I'm not saying that CBS should not have reported on this incident; I'm saying that the reporter clearly blew it out of proportion. When you consider everything else that happened that day, it was inane and irresponsible for CBS to lead with what was, in essence, a relatively unimportant side story.
Incidentally, the cops used sound cannons against the protesters. Those devices surely did a lot to inconvenience children and other innocent pedestrians -- yet you don't see CBS discussing the morality of using "non-lethal" crowd control weaponry (initially developed by the Department of Defense for use against insurgents) in public. Not so incidentally, sound-based weaponry can easily cause permanent hearing loss.
This important story by Eric Alterman tells the larger story...

The Daily News, owned by billionaire real estate mogul Mort Zuckerman, cheered “Bravo to Bloomberg’s Occupy Wall Street eviction from Zuccotti Park, [for] finally reclaiming public space from unsanitary shantytown.” He added: “What they [the protesters] need to overcome is a sense that they occupy a higher moral ground than everyone else and are entitled to the privilege of behaving obnoxiously.”

Rupert Murdoch’s New York Post claimed: “Lunatics had taken over the asylum, as if the right to use a park as a public outhouse was in the Constitution,” and called the Occupiers “silver-spoon sickos.” The editorial page credited the crowd at Zucotti Park with being made up of “criminals, vagrants and other loons.”

Another New York newspaper, this one owned by Jared Kushner, the socialite son of another real estate scion (who is currently in prison), also embraced the “law and order” arguments of the mayor. His New York Observer worried, without evidence of problems, that the protests could hypothetically “lead to public health issues, especially with winter approaching.”

Lost among this tone of self-congratulation by the millionaires and billionaires who are lucky enough to buy their ink by the barrel are not only their alleged commitment to the protection of the first amendment but the facts themselves that inspired the protests.


The mainstream news coverage has been outrageously skewed to make the OWS movement seem like a gaggle of violent maniacs. Example: Fox News tells us that four cops "possibly" had vinegar tossed at them. We are supposed to regard this action as the work of Robespierre reincarnate. (I've lost the link, but a Los Angeles Times reporter worked the OWS crowd and found an aged self-avowed "Marxist" to interview. Naturally, he became their main focus.)
In short and in sum, mainstream journalists have worked hand-in-glove with the well-funded right-wing blogger establishment in a ferocious effort to smear the protest movement.
And yet those same bloggers absurdly insist on scoring journalists for their alleged liberal bias.
(Is it my imagination, or is mainstream news coverage -- not just of OWS, but of everything -- skewing even further to the right than usual?)

The Deficit fight: Would it be best to do nothing? E.J. Dionne says yes.

That’s right. If Congress simply fails to act between now and Jan. 1, 2013, the tax cuts passed under President George W. Bush expire, $1.2 trillion in additional budget cuts go through under the terms of last summer’s debt ceiling deal, and a variety of other tax cuts also go away.

Knowing this, are you still sure that a “failure” by the congressional “super committee” to reach a deal would be such a disaster?

At this stage of the game, I think that it is important not just to make tax cuts "go away," but to have actual -- and substantial -- tax increases on the wealthy in order to pay for jobs programs. I favor a "return to Reagan" approach: Bring the top-tier tax rate back to where it was in, say, 1985.

But that common-sense solution can't happen with this Congress. Dionne pinpoints why:

The Republican approach is wrong and irresponsible but brilliant as a negotiating strategy. As my Washington Post colleague Ezra Klein wrote this week: “Over the past year, Republicans have learned something important about negotiating budget deals with Democrats: If you don’t like their offer, just wait a couple of months.”

Happy News in Burma: Aung San Suu Kyi -- a genuine saint of modern politics -- will be participating in upcoming elections in Burma.

James O'Keefe: Looks like Andrew Breitbart is no longer trying to distance himself from his chief hit man. Now O'Keefe's associates are turning on him, in a classic "thieves fall out" storyline...

James O’Keefe dreamt up an even bolder plan: to build a permanent undercover video operation that would expose institutions of the American left.

But things have not gone according to plan.

O’Keefe’s vision, pieced together from court filings, interviews and tax records filed by his nonprofit Project Veritas, has been hampered by bitter infighting, lack of funding and even his own fame.

And O’Keefe has begun to fight back, preparing lawsuits against two former associates-turned-critics — one who claims O’Keefe had little to do with his biggest post-ACORN exposé, focused on NPR, and another former colleague who says she backed out of a project last month because of O’Keefe’s lack of professionalism.


Here's the part of Politico's coverage that irks me no end. Breitbart is described as the man

who posted O’Keefe’s blockbuster ACORN videos and defended them against criticisms of misleading editing. Breitbart attributed the squabbles buffeting O’Keefe to a liberal establishment intent on “exploit[ing] a weakness in his operation or a weakness in one of his presentations.”

The misleading editing of the ACORN videos has been established beyond rational debate. Yet this piece of alleged journalism tries to blur the truth about O'Keefe's perfidy. "He said; she said -- gosh, it looks like we'll never know what happened."

Isn't it cute how Andy tries to pin the blame on an imaginary conspiracy of liberal enemies? The story focuses on O'Keefe's current troubles with his associates, as well as his unsuccessful recent fundraising efforts and the right-wing media's boredom with his recent escapades. How can anyone blame liberals for any of that?

In Breitbart's world, it's perfectly fine to blame a hallucinated liberal conspiracy if a meteor demolishes your car.