A few words are in order concerning this absurd piece by Rick Moody of The Guardian on Hollywood's inherent "cryptofascism." He takes his argument from some inane anti-OWS commentary offered by comic book writer/artist Frank Miller.

I'm old enough to recall when Miller was just a kid who lucked into a gig drawing Daredevil, which he did very well. It's rather odd to think that he's now in a position where newspaper editorialists take his pronouncements seriously.

Moody judges the entire industry by the example of one man who barely counts as being in that industry. The studios allowed Miller to direct just one feature, The Spirit, a commercial and artistic failure. I doubt that he'll ever get a similar chance again. In the comics world, he's considered both a giant and a has-been. (He recently wrote a how-Batman-met-Robin series which was widely derided as a train wreck.)

The story of this man's political evolution is simple and familiar. Miller used to be somewhere on the left. His Dark Knight Returns functions as a critique of Reaganism; both Batman and (especially) Green Arrow are pictured as mad-yet-noble anarchists who make the OWS protesters seem like boy scouts. Batman: Year One portrays the capitalist power structure as hopelessly corrupt. (The recent animated film based on this series may be the best Batman movie ever made.) Give Me Liberty and Ronin offer dystopian views of an America destroyed by corporatism.

Miller's first forays into screenwriting are the second and third Robocop films. These are the only mainstream movies known to me which use the word "capitalist" as an insult.

Then came 9/11 -- and Miller, like Christopher Hitchens, became a convert to reaction. Ever since, he has been saying some rather obnoxious things. Frank Miller and Dennis Miller have more in common than a surname: They are both thought to have lost much of their talent when they made a hard right turn. 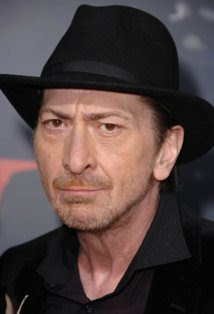 Right now, Frank Miller complains that the OWSers take drugs and have bad hygeine habits. I find this assessment hilarious: In every photo I've ever seen of him, Miller seems like the guy you wouldn't want to sit next to on the bus. Does he have a lifelong history of complete sobriety? I dunno. But...hell, just look at him!

(In case you're wondering: I do have a history of sobriety -- but you definitely wouldn't want to sit next to me on the bus.)

My point is simple. Moody thinks that Miller's instantly-notorious anti-OWS commentary indicates that Hollywood is a haven for "fascism." But when Miller was stridently anti-capitalist, Hollywood invited him in to write big movies. Now that Miller has turned into a weirdo inhabitant of Glenn Beckistan (or maybe Pam Gellerland), once-open doors appear to have shut.

Did those doors close because of his politics? Not necessarily. I think the studios lost interest in the man when The Spirit tanked. That's capitalism for you!

But it is also the case that the industry likes people who are likable. This is something rarely understood by people who grew up outside of Los Angeles: In Hollywood, you get points for being nice, or at least for being able to fake nice; a good attitude goes a long way. Every anecdote I've ever heard about Miller, especially the post 9/11 Miller, has conveyed the same impression one gets from his work: The guy is an angry ferret. He radiates cynicism. For him, every day is Resentment Day.

Don't misunderstand: A large part of me admires his ultra-captious worldview. At least he has a worldview. But that doesn't mean I admire the inane things he said about OWS.
posted: 10:03 AM