Update...for those of you who came here via a right-wing site because you want to be outraged, check this out. Talk about shameless!

* * *
Readers -- please pass along the information here, including the all-important update. In that update, you'll find that we have made an important breakthrough. Weiner was framed, and we know the name of the framer.


First, the original post, as it appeared this morning (and I apologize to newcomers for the "in medias res" opening; if you just now showed up here, you may want to skim the first few paragraphs:

I owe an incredible debt to my readers, particularly one who comments under the sobriquet "milowent." We may be very close to a resolution of this case.

First, we have what appears to be damning evidence -- the date stamp:

It appears that the image allegedly found in the browser cache was created on the date it was discovered, not at the time of the alleged tweet. For whatever reason, Dan did a copy-and-paste of that photo (thereby creating a new file) on the 30th, instead of passing along a copy of the original.

Folks, I need your help! Reader milowent offers the most intriguing possibility to arise out of this entire case:

easiest way to pull off this as a hoax would be if you knew weiner's yfrog email address. email a blackberry pic to that email address with (@subject) in text and you'd create exactly what happened here.

the chance that somewhere along the way that weiners yfrog address had been leaked? pretty damn high. it would happen if weiner or an aide simply forwarded a pic he emailed to his yfrog account to anyone else (thus showing the yfrog email address in the chain).


Is this true? I never would have suspected that such a thing was possible, or that the answer could be so simple. Let's conduct the experiment.

My yfrog address is gdowson153.gudom@yfrog.com. I won't tell you the password, and I'm pretty sure that you can't guess it. Right now, there are only two images in my account, both mentioned in previous posts: One is the Burne-Jones painting, while the other is a picture of my dog.

Can anyone get a third picture into that collection? No hacking, please. And keep the pic safe for work.

Would it be possible to use a technique like this to get an outsider's message into the congressman's Twitterstream?

I'll be back later with more about the EXIF data, if you're into arcana of that sort.

And now here's the UPDATE: Reader "milowent" took up the challenge. Without knowing my password -- without hacking into my account -- he got a third image into my Yfrog account, using the simple technique explained above. Here's the image he sent me: 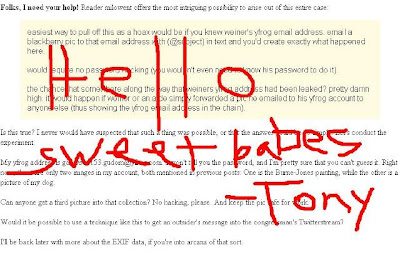 Kind of creepy, isn't it? I'm reminded of those "ransom" photos you see in the movies, where the kidnap victim holds up a current newspaper.

Here is the image as it appears on my Yfrog account: http://www.yfrog.com/h2h0sijj

If you click on that link, you may notice something important. By using this technique, milowent (or is it Tony?) was able to create a header that does not contain the URL of the image below the account holder's name. As we've seen in previous posts, that URL does appear if the account holder uploads a picture. Apparently, it does not appear if someone else emails a picture to that account. 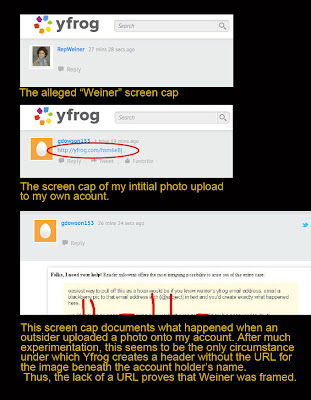 The screencap of Congressman Weiner's page -- the one featuring the infamous "crotch shot" -- lacks the URL. As far as I can tell, the only way to create that anomaly is when someone other than the account holder places an image on Yfrog, using the simple strategy outlined above.

The comparison image given here should explain the situation to anyone I've accidentally confused. (Click on the image to enlarge -- and I'm very embarrassed by the misspelled word.) The first header was taken from the Weiner screen cap as it appeared on Breitbart. Note the lack of a URL beneath "RepWeiner" -- just blank space.

I demonstrate those "normal circumstances" in the second example. This is what the header looked like when I uploaded a picture to my own Yfrog account. Note that the URL for the image appears right below my pseudonym. (As noted in an earlier post, I opened the account under the name "G. Dowson," which happens to be the name of an illustrator whose work I like.)

The only way to create a URL-free header is to have someone else send a pic to one's Yfrog address. Milowent did just that. You can see the result: The header now has a blank space beneath Dowson's name.

Why does Yfrog work that way? I don't know. Ask their programmers.

The important point is this: The anomaly in the header indicates that the image was not sent by Weiner. It had to have been sent by someone else.

Not only that. Believe it or not, when an outsider sends a pic to someone else's Yfrog account in this fashion, the action creates a message in the "twitterstream." The message seems to originate with the Twitter account holder -- but it doesn't. It comes from somewhere else -- from someone mailing a picture to the account holder.

This is a serious security flaw in the design of Yfrog and Twitter. It allows a malicious outsider to "spoof" a tweet that seems to come from someone else.

Click on the image below (to enlarge it) and examine the "twitterstream." You'll see what I mean. 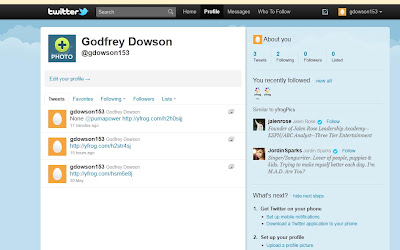 Please understand that I have never sent a single tweet in my entire life.

The first two instances were created automatically, when I uploaded those first two test pictures to Yfrog (as outlined in previous posts). The third instance was created when milowent sent a pic to my Yfrog address.

Both the tweet and the image seem to originate with me, but they did not.

This was the perfect frame. We know it was a frame because of the URL address beneath the header -- or rather, the lack thereof in the Weiner "crotch shot" screen cap.

I knew that there was something significant about that anomaly!

Granted, my initial preconceptions about the cause of that anomaly were mistaken. Please forgive me for thinking in terms of photo manipulation. By nature and by trade, I'm a Photoshop guy -- not a Twitter user and not a Blackberry user. Naturally, my first instinct was to presume image manipulation.

When I first began to look into this affair, I had no idea that it was so easy to inject data into someone else's "twitterstream" and make it appear that the data came from that person.

We must emphasize once again: All of this was accomplished WITHOUT HACKING.

Who did it? All evidence points to Dan Wolfe. I believe that he framed Congressman Weiner. I state this directly, without equivocation.

What signs point to Wolfe?

1.We now know that a frame-up existed.

2.Only the framer would have or could have drawn attention the "crotch shot" immediately after it was appeared on Weiner's Yfrog account.

3. Here is a screen cap of Wolfe's tweets during the time period. Reading these tweets in the context of the above information, only one conclusion is possible. 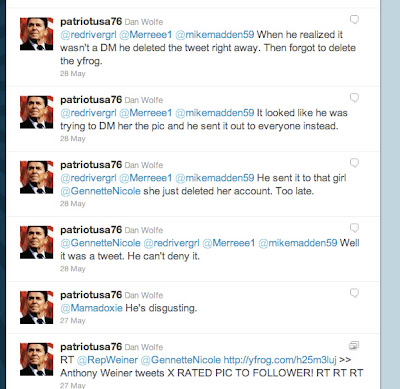 The timeline reveals much. For these tweets to have been posted at the tail end of May 27, they had to have appeared very soon after the image was uploaded. The framer had to jump up and down and draw attention to his handiwork immediately after the upload. If he waited, the image might have been deleted.

Wolfe was the only person drawing attention to that image.

4. Dan Wolfe is not only a partisan zealot, he was obsessed with Congressman Weiner. His obsession strikes many as downright pathological.

5. Dan Wolfe had "predicted" an alleged sex scandal ahead of time.

6. There is also the matter of the 800x600 image which Wolfe (days later) said that he had "found" in his browser cache. The date stamp on this image is May 30, not May 27. The EXIF data is strange in other ways.

7. Dan has told contradictory stories about whether he did or did not click through to the largest version of the image, as it appeared on the Yfrog site.

8. The screencap published on Breitbart's site shows a 640x480 image. This means that a 640x480 image should be in Dan's browser cache. Cannonfire reader milowent has experimented with his Blackberry and found that the EXIF data (otherwise known as "metadata") for this image should contain the exact make and model of the camera that made the photograph. This information would allow us to exclude Weiner's camera -- if it were made available.

Dan, tellingly, gave us another photo.

It all adds up. If you have any ability to follow a moderately technical argument, only one conclusion is possible. We know that Congressman Weiner was framed, and we know the name of the framer.

The framer did not hack into Weiner's account. There was no need for hacking. The framer used a much simpler, more ingenious scheme, involving a design flaw in the architecture of the application.

Nota bene:
I'll repeat here something I've said in the comments. A quote -- by Upton Sinclair, I believe -- had been gaining a lot of traction lately:

"It is difficult to get a man to understand something when his salary depends on his not understanding it."

Substitute "ideology" for "salary," and that quote describes the probable right-wing response to the arguments given here. Let me predict one such response (which you can find here):

Congressman Weiner admitted to deleting the tweet and image involved. You are clearly blind to the facts.

Did he make that admission? Why is it that we never get a citation, a quotation or a link to back up these statements?

More than that. Think about the matter objectively for a few seconds: Even if Weiner had deleted the photo, so the fuck what? As proven above, an outside miscreant had uploaded a lewd photo onto his account. I sure as hell would have deleted the thing immediately, and I'm not a congressman.

Look at it this way: Hours after my first post on this topic, I was forced to censor a crudely anti-Semitic comment sent to this blog. That insincere, over-the-top racist slur was an obvious attempt to plant something on this blog that could be used against it. (As in: "You're quoting Cannonfire? That place is a hotbed of bigotry!")

Am I guilty of a cover-up because I deleted that outsider's attack?

Would Congressman Weiner be guilty of a cover-up for deleting an outsider's attack?