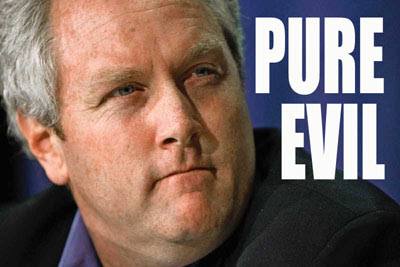 I had hoped not to have to speak about the lewd photo sent (allegedly) from Representative Anthony Weiner to an attractive college student. From the start, I presumed this to be another one of Andrew Breitbart's foul tricks. Alas, it looks like we must address this silliness. The story is all over the news today, and the headlines are incredibly biased.

The NY Daily News blares in a headline:

You have to read the story (instead of just skimming the headline, as many will do) to learn that she actually denies that the image came from the congressman. In other words, the headline stipulates as fact the very point in contention. Petitio principii is now considered journalism.

The truth of the matter is starting to become clear. The woman in question had been a follower of Congressman Weiner via Twitter. I've long warned people to avoid Twitter and Facebook; now, perhaps, more people will understand the dangers. This current story about the recent intrusion into the PBS website should remind us the capabilities of hackers.

The alleged Weiner photo first appeared on Brietbart's smear site. If you don't yet know that Breitbart is a liar, you're so dumb you probably can't spit without an instructional video.

The woman in question, Gennette Nicole Cordova, has issued this statement which should (but probably won't) end any debate as to what really happened.

Friday evening I logged onto Twitter to find that I had about a dozen new mentions in less than an hour, which is a rare occurrence. When I checked one of the posts that I had been tagged in I saw that it was a picture that had supposedly been tweeted to me by Congressman Anthony Weiner.

The account that these tweets were sent from was familiar to me; this person had harassed me many times after the Congressman followed me on Twitter a month or so ago. Since I had dealt with this person and his cohorts before I assumed that the tweet and the picture were their latest attempts at defaming the Congressman and harassing his supporters.

Annoyed, I responded with something along the lines of "are you f***ing kidding me?" and "I've never seen this. You people are sick." I blocked their accounts, made my page private, and let the matter drop, expecting them to eventually do the same.

Within about an hour, however, I realized that I had grossly underestimated the severity of the situation that I had somehow become a part of.

The last 36 hours have been the most confusing, anxiety-ridden hours of my life. I've watched in sheer disbelief as my name, age, location, links to any social networking site I've ever used, my old phone numbers and pictures have been passed along from stranger to stranger.

My friends have received phone calls from people claiming to be old friends of mine, attempting to obtain my contact information. My siblings have received tweets that are similar in nature. I began taking steps, though not quickly enough, to remove as much personal information from the Internet as possible.

Not because I "was exposed as Weiner's mistress" or because I "was responsible for the hack," as Gawker has suggested. I removed my information because I, believe it or not, do not enjoy being harassed or being the reason that my loved ones are targets of harassment.

I have seen myself labeled as the "Femme Fatale of Weinergate," "Anthony Weiner's 21-year-old coed mistress" and "the self-proclaimed girlfriend of Anthony Weiner."

All of this is so outlandish that I don't know whether to be pissed off or amused, quite frankly. This is the reality of sharing information online in the 21st century. Things that I never imagined people would care about are now being plastered all over blog sites, including pictures of me from when I was 17 and tweets that have been taken completely out of context. I tweeted once (it was reported that I said it twice) that "I wonder what my boyfriend @RepWeiner is up to."

I am a 21-year-old college student from Seattle. I have never met Congressman Weiner, though I am a fan. I go to school in Bellingham where I spend all of my time; I've never been to New York or to DC. The point I am trying to make is that, contrary to the impression that I apparently gave from my tweet, I am not his girlfriend. Nor am I the wife, girlfriend or mistress of Barack Obama, Ray Allen or Cristiano Ronaldo, despite the fact that I have made similar assertions about them via Twitter.

There have never been any inappropriate exchanges between Anthony Weiner and myself, including the tweet/picture in question, which had apparently been deleted before it reached me. I cannot answer the questions that I do not have the answers to. I am not sure whether or not this letter will alleviate any future harassment. I also do not have a clear understanding as to how or why exactly I am involved in this fiasco. I do know that my life has been seriously impacted by speculation and faulty allegations. My reputation has been called into question by those who lack the character to report the facts.


"My friends have received phone calls from people claiming to be old friends of mine, attempting to obtain my contact information. My siblings have received tweets that are similar in nature." That, my friends, is the mark of Brietbart. Oh, he's probably not doing these things personally -- as with the O'Keefe business, he'll stay at arm's length.

Cordova may be faulted only in this: She is trying to remove personal information that should never have been placed online in the first place. The usual "toothpaste out of the tube" metaphor applies. I'll say it again: There is no reason whatsoever to use social networking sites. Everyone who uses these sites divulges private information (to the world or to the site's administration) that should remain private. Anyone who uses such sites might as well go running down the street naked.

The internet as it existed in 2004 was a safer place. (Before you howl your predictable howls: I said "safer," not "safe.") Don't use Twitter. Don't use Facebook. Stick to blogging, emailing and traditional personal websites. That's all you need. You may think you'll never end up like Ms. Cordova -- whose relatives must now fend off prying phone calls from Brietbart's slime brigade -- but such things could happen to you.

Twitter collects personally identifiable information about its users and shares it with third parties. Twitter considers that information an asset, and reserves the right to sell it if the company changes hands.

Facebook is worse. It may sound like conspiracy paranoia to assert that Zuckerberg's cash cow was developed with CIA money, but facts are facts.

Facebook now requires new subscribers to divulge their cell phone numbers. The only reason they ask for that information is to be able to track your location via GPS. Indeed, the Facebook/government connection may well be the hidden secret behind the Patriot Act, as discussed in our previous post.

Let's hope that the perps behind this smear end up in court, as is happening to Brietbart aide James O'Keefe.

UPDATE: The New York Times gets it wrong -- again. I say "again" because they notoriously refused to correct their original, incorrect stories about the O'Keefe smear. From the NYT:

A woman sent a statement to The Daily News that said she was the one who had received the photo and that she had never met Mr. Weiner, though she did follow him on Twitter.

(Emphasis added.) From the actual statement:

There have never been any inappropriate exchanges between Anthony Weiner and myself, including the tweet/picture in question, which had apparently been deleted before it reached me.

The tech involved may be confusing, but the meaning of her words is not. She never received the picture, which was allegedly uploaded to a YFrog account connected to the congressman's Twitter account.

Also, the NYT ends it's account with these words:

I tweeted once (it was reported that I said it twice) that ‘I wonder what my boyfriend @RepWeiner is up to.’ ”

The NYT gives a confusing impression by leaving out the young lady's denial that she has ever met or spoken to Wiener. She has, by her own admission, also referred to Barack Obama and others as "boyfriends."

She means this in the same sense that my ladyfriend calls Alton Brown her "boyfriend." (Yeah, I know. Go figure.)

(Despite my lifelong crush on Bernadette, I don't refer to her as my "girlfriend." That would seem inappropriate, what with her being canonized and all.)

I have a theory as to what is really going on here -- and I'll share it with you soon. Right now, I have a Memorial Day "thing" to attend. When BBQ calleth, one must heed.
posted: 6:17 AM