Many questions surround the raid that killed Osama Bin Laden. Foreign sources are giving accounts of the raid -- and of Pakistan's role -- which differ markedly from the version prepared for U.S. consumption.

Some of this material is rather disturbing...

Update: Was Osama's wife killed or not? Many news reports said that a woman, presumed to be Osama's wife, was killed after he tried to use her as a human shield. See here...

A White House spokesman last night revealed Bin Laden tried to use his wife as a human shield when US Navy SEALs stormed his compound.

But a bullet to the head ended the 10-year hunt for the 9/11 monster. His wife was killed too.

But this AP video (scroll down) tells a very different story. In essence, the video claims that another woman was killed in the raid -- and that Osama's wife identified him after death! (No-one has spoken of more than one wife being present.) Another White House official has confirmed that the slain woman was not Bin Laden's wife.

Did the Pakistani government know about Bin Laden's location? A lot of people are saying that they had to have known all along.

Hamid Karzai, the Afghan president, hinted that the Pakistani state itself was complicit in sheltering the terrorist leader, saying Bin Laden had "hidden himself in the military bases of Abbottabad".

Ironically, only 10 days ago Pakistan's army chief addressed cadets at that town's military academy – the equivalent of Sandhurst in the UK or West Point in the US – claiming the army had broken the back of militants linked to al-Qaida and the Taliban.

Bin Laden was about half a mile away, living large. The Telegraph says that Wikileaks releases reveal that Pakistani services protected top Al Qaeda personnel living in that country

American diplomats were told that one of the key reasons why they had failed to find bin Laden was that Pakistan’s security services tipped him off whenever US troops approached.

Pakistan’s Inter-Services Intelligence Directorate (ISID) also allegedly smuggled al-Qaeda terrorists through airport security to help them avoid capture and sent a unit into Afghanistan to fight alongside the Taliban.

The Pakistani press is fretting about this:

“Pakistan has found itself in quite the embarrassing situation. Whilst we have been allies of the US, we have been very trying partners, picking and choosing the militants we wanted to root out and the ones we wanted to protect,” the Daily Times said.

This writer for Dawn reminds us that Pakistani officials routinely became infuriated whenever anyone suggested that Osama Bin Laden was in Pakistan.

Why, yours truly has been called a traitor deserving of death when I suggested that only given what the establishment itself told us about Osama’s failing kidneys and need for regular dialysis there was no way he was living in a cave on some remote mountain. Why indeed, did the Commando puff out his chest and glare at Hamid Karzai when the Afghan president suggested that Al Qaeda’s top leadership was hiding in Pakistan? Why the stout denial all these years?

Actually, we had a similar situation in this country. The official line placed Osama Bin Laden in a wild, un-policed territory -- and anyone who suggested otherwise was considered something of an oddball.

But when you go to the very difficult question of dealing with sanctuaries in sovereign states, you're dealing with a problem of our sense of international obligation, fair play.

In light of recent events, Goss's statement indicates that a similar raid could have been carried out five or six years ago.

Has capturing/killing Osama Bin Laden always been a political problem, not an intelligence problem? Precisely what has changed, politically?

Did Pakistan cooperate with the American raid? Many articles in the Western press indicate that the American team went to great lengths to keep their operations a complete secret from the Pakistanis.

Mark Ambinder of the Atlantic asked:

How did the helos elude the Pakistani air defense network? Did they spoof transponder codes? Were they painted and tricked out with Pakistan Air Force equipment? If so -- and we may never know -- two other JSOC units, the Technical Application Programs Office and the Aviation Technology Evaluation Group, were responsible. These truly are the silent squirrels -- never getting public credit and not caring one whit.

When one encounters a passage like this, one does not have to squint very hard to read between the lines. Obviously, Ambinder is here more-or-less admitting that he has been told that transponder codes were spoofed. Just as obviously, he has been told not to say so directly.

Okay. But why not say so directly? Why the wink wink, nudge nudge?

In Pakistan, many believe that their government was complicit. Indeed, this seems to be the question over there.

Dawn said the operation raises a slew of questions about the level of cooperation with Pakistani intelligence and the military.

“Were they taken into confidence? If so, at what point? Were they consulted or simply informed? Did they play any role in the operation?”

At least, such is the purport of this article on the Pakistan Defence Blog, headlined "Osama killed by American troops. Pakistan Army provided ground support."

Forgive the long quotation, but this one is definitely worth reading. (So don't skim!) I'm adding paragraph breaks to increase readability:

About 200 Pakistan Army men provided ground support, top level official sources told The Nation. During the operation, four helicopters of the Pakistan Army hovered over the fortress-like hideout of al-Qaeda chief at Thanda Choh, a relatively isolated area of Abbottabad’s otherwise posh locality Bilal Town that is barely a kilometre away from the Pakistan Military Academy, Kakul.

Initially, the US military personnel opened fire at the outer wall of Osama’s hideout, which was retaliated by the house inmates with heavy gunfire. After almost twenty minutes of cross-firing, the US forces directly targeted the house with sophisticated bombs, eventually killing Osama, his eight bodyguards, seven close aides and an unspecified number of family members including a young son, children and two wives.

When the residents of the area, upon hearing heavy gunshots and explosions, came out of their homes or went up to the rooftops of their houses, Pakistani soldiers in helicopters threw search lights, instructing them to stay indoors. Besides initial aerial support, the Pakistan Army provided ground support by deploying ground troops within a radius of one kilometre of the operation area.


That's not the way they're telling the story in the U.S. media!

If the cooperation was that close, then obviously there was no need to spoof transponder codes. Which means that someone lied to Ambinder.

Did a helicopter crash? There have been widespread reports of a crash, and even grainy video footage of a burning helicopter. There are conflicting accounts as to whether gunfire from the compound brought the chopper down.

The above-quoted story from the Pakistan Defence Blog says that it was a Pakistani helicopter that crashed. That possibility has been kept out of the U.S. press, which is hewing to the line that Pakistan was kept entirely in the dark about the operation until after the fact.

However, we also have this:

Meanwhile, Sahir Elahi, an eyewitness who lives a few yards from the place where the operation took place, doubted if any helicopter had crashed. “We were the first to reach the spot – by that time the security forces had not cordoned off the area. The wreckage of any helicopter was nowhere to be seen. I think it was a bomb that was dropped by the US forces,” he said.

(Emphases added.) This is all very strange. How could a close neighbor, on the scene at that early stage, miss a thing like a helicopter crash?

But if there was no crash, then why on earth would so many accounts speak of one? I can see no reason to fib about such a thing.

Unless...unless it really was a Pakistani chopper that went down -- not on the scene of the raid, but some ways away. The fib was motivated by American determination to keep Pakistan's part of the operation secret.

So far, that's the only theory that seems to cover the facts. 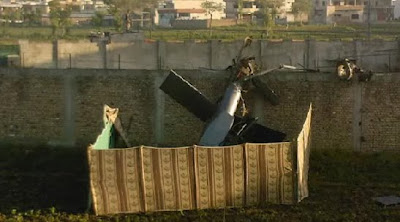 Update: More on the chopper crash. The AP video referenced above gives us a photo of the crashed chopper, identified as American. If we are to believe this story, then the Americans evacuated their personnel -- and the captured members of Osama's entrouage, and the Bin Laden body -- in but one helicopter.

That doesn't seem terribly likely to me.

Perhaps this photo will help us identify just where the helicopter went down, and whether it is Pakistani or American.

What about the missing years? It seems that Osama moved into this residence in 2006. Where was he before?

Is there a photo? Dawn says that photographic evidence of Osama's corpse exists -- and this isn't the hoax photo discussed earlier.

Still-secret photos of the dead Osama bin Laden show a precision kill shot above his left eye, a US official said...

The administration weighed whether to release photos of bin Laden’s corpse and video of his swift burial at sea. Officials were reluctant to inflame Islamic sentiment by showing graphic images of the body. But they were also eager to address the mythology already building in Pakistan and beyond that bin Laden was somehow still alive.

US officials say the photographic evidence shows bin Laden was shot above his left eye, blowing away part of his skull.

This is ridiculous. We've all seen brutal and disturbing photographs of Iraqi corpses. We recall the video record of Saddam Hussein's execution. We also recall the videos (some of them questioned) of Al Qaeda personnel beheading Nick Berg and other Americans. Suddenly, the American government is acting squeamish about Osama Bin Laden?

It doesn't make sense. Not to me, at least.

I'll have more, later on today -- including a look at some of the wilder theories offered by Alex Jones and the "deathers." As always, we can count on Alex to bring discredit to anyone asking questions of authority.

Update: Here's a cute piece from ABC on the need for "death proof."

It may have been those very rumors [of Osama's death years ago] that led Obama to pass up an opportunity to bomb bin Laden's compound. As ABC News' Jake Tapper reported earlier today, Obama recognized that kind of destruction would leave no trace of bin Laden's death.

Instead, Obama opted for a far more difficult mission with a Navy SEAL team...

Ah. So the administration passes up the bombing scenario and goes with a more dangerous raid scenario, because they want to make sure that they have an identifiable body. They need the body to scotch rumors spread by conspiracy theorists. And then what do they do? They dump the body into the ocean!