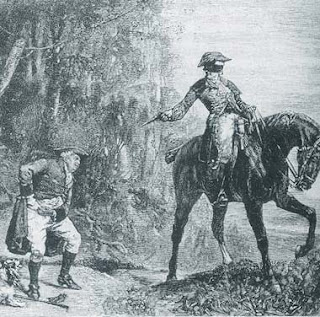 Standard and Poors has revised the sovereign credit rating of the United States. We used to be stable; now we're "negative."

Futures fell from a 33-month high as Standard & Poor’s said there’s a “material risk” that U.S. policy makers may not agree on a plan to address long-term budget issues by 2013.

Translation: The revised credit rating is meant to push the administration and lawmakers into going after Social Security and Medicare. The right-wing now has an additional propaganda tool to push for draconian cuts in areas that will most hurt working and middle class Americans. You can already see how this move will play out.

This piece emphasizes that this is all about having a debt reduction plan in place before the next election. In other words: Welcome to the return of "NOW! NOW! NOW!" As 2008 taught us, legislators don't think well in that kind of pressure cooker.

Here's the kicker: Standard and Poors and Moody's are private firms. They don't work for the United States; they serve the interest of Wall Street banks. 2008 taught us that they are completely unaccountable.

These are the same folks who gave AAA ratings to weird, previously unheard-of financial instruments based on crap home loans. Why? Because that's what Wall Street wanted them to do. Matt Taibbi tells the story in his book Griftopia. So does this post by William Alden:

The major credit rating agencies repeatedly sold out to Wall Street banks, so addicted to short-term profits that they sacrificed the accuracy of their reports to maintain a competitive edge, a two-year government investigation has concluded.

Rather than assess risk accurately, two major rating agencies sold their top seals of approval to their investment bank clients, blessing products that the agencies themselves knew to be undeserving, the Senate Permanent Subcommittee on Investigations concluded in a report released Wednesday. By repeatedly debasing their standards, these agencies helped banks sell shoddy securities to unsuspecting investors, inflating the value of assets that turned out to be worth far less, the report has found.

People who worked at S&P and Moody's during this time described a situation in which the companies' independence eroded almost entirely, so that they perpetually granted the wishes of banks that requested high ratings.

So these rating agencies are not independent. Despite the fact that their ratings have legal status, they are creatures of the biggest banks. Which means that those banks are the real forces at play here.

Bottom line: The banks want an end to Medicare and Social Security as we know them. Libertarian ideologues want Social Security transferred to private hands and invested in the stock market. Since the administration has put in place no serious regulations on Wall Street, the banks will rob the Social Security fund, just as they robbed pension funds and other investors.

We have learned nothing since 2008. What happened during the Bush and Obama administrations was the single greatest transfer of wealth in history -- yet the robbery to come will be much worse.

If the ratings issued by Standard and Poors and Moody's must have legal status, then those firms must be taken out of private hands. The companies must be made accountable to elected representatives, not to the great Wall Street bankers who want to suck everything out of this once great country.
posted: 1:47 PM